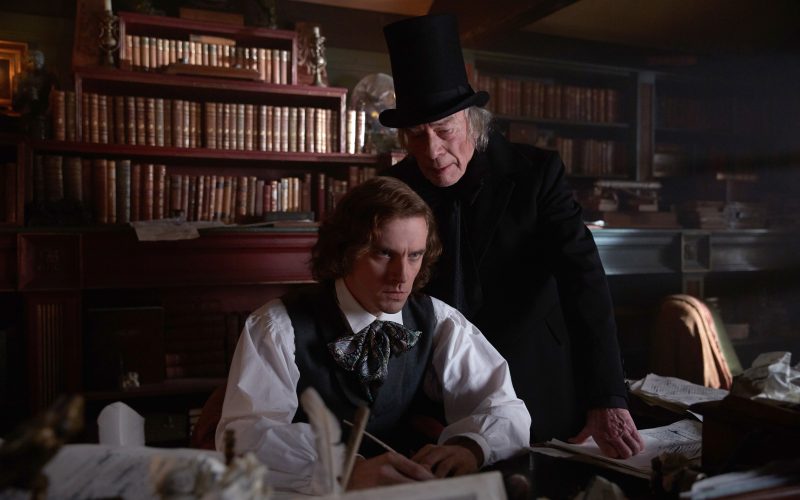 The ghosts of Christmas Carols past cling to The Man Who Invented Christmas, making me wonder just how many more movies can be squeezed from this admittedly beloved but well-milked source material.

Turns out the answer is maybe just one more.

The conceit of The Man Who Invented Christmas is that Scrooge is an avatar of the author himself, a man whose contempt for the rich and powerful of the world has eroded his conviction that their literary symbol can be redeemed.

Dickens’s adoring and more sentimental public is represented by a newly hired maidservant who insists that Tiny Tim must be saved, that nobody — not Scrooge, not the author himself — could be so heartless as to value profit over subsidized health care for poor children. We know how this is going to end, of course. We’ve all read the book at least once and seen media adaptations many, many times. Dickens’s pen hovers above the blank page in the most cliched visual representation of writer’s block imaginable, but there is no more suspense here than there is in the average romantic comedy about whether the lovers will end up together.

Need there be? A Chrismas Carol is, after all, about reshaping expectations rather than surprising them. What is strange about The Man Who Invented Christmas in that regard is that it seems oblivious to the cultural work it is allegedly performing. In an early scene, Dickens is stopped by a rich, female fan. Her husband represents the sort of heartless wealthy elite that the author despises, claiming to (n the most rhetorically cliched expression there is) have pulled himself up by his own bootstraps and never received help from anyone. The wife then reminds the husband that he received a substantial loan from his father when they were starting out.

Is this a jab at President Trump? To the extent it can be considered one, the film momentarily grapples with complexity, which is exciting, inviting liberal viewers (such as myself) to push beyond characterizations of social and political policy to grapple with harder questions such as whether their own theology is one that believes in personal transformation or only just social justice. But the film wants to have its figgy pudding and eat it too. So the fictional softening of a miser’s heart becomes less of an evangelical proclamation that God could do the same in real life than a somewhat prideful piece of evidence that our hearts are more charitable towards our oppressors than they are towards us. Thank you, God, that I am not like that man, a sinner.

The gender and sexual politics are also somewhat problematic for anyone who knows Dickens’s biography. The setting of the film is well before the author left his wife, abandoned his own children, and shacked up with a younger actress. Resolutions to keep the spirit of Christmas alive in one’s heart fade over time, don’t they? And here again, the film could be read as suggesting that one’s political and social attitudes towards the poor are a truer mark of the Christian heart than, say, forsaking all others. When Dickens finally relents and lets Scrooge save Tiny Tim, wife and maid beam at the man they both love. Is the film aware of just how ironic this depiction is? I don’t know.

What I do know is that Christopher Plummer, who plays Scrooge has achieved the status and arrived at the stage of his career where one wants to see everything he does. Great actors are more often defined by their signature roles, but one mark of their talent is their ability to distinguish themselves when they appear in conventional fare. I doubt I would ever want or need to see The Man Who Invented Christmas a second time, but I could watch the scene where the walls of the grave close in on Scrooge a hundred times. It is a scene built on rhetorical expressiveness and thus one that could seduce and has seduced many an actor into histrionics. Yet, as delivered by Plummer,  each of the speech’s intonations and modulations lands with fresh force. For those few seconds, the film transcends its own sentimental conventions and achieves a sublime authenticity. We feel as though we are not just being told a conversion story but actually seeing someone become born again before our very eyes.