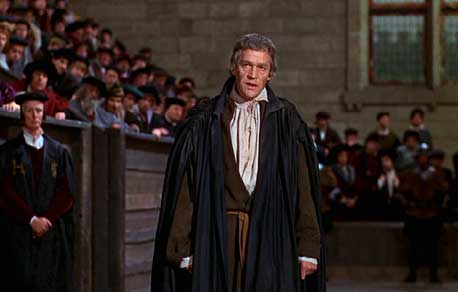 Editor’s Note: In 2017, a popular meme on Facebook asked respondents to list their favorite films for each year of their lives. While I didn’t make a list at that time, I did like the idea, and the Favorite Film Series is an attempt to spotlight films that would be on my list. I pick a year and write about my favorite film from that year. It may not be the “best,” though there are usually some overlaps.

Since I began publicly reviewing films (in 1986), I have mostly avoided writing about Fred Zinnemann’s adaptation of Robert Bolt’s play. Not too many of the adolescent and teen peers in line with me to see Star Wars for the umpteenth time were even aware of the hagiography of Sir Thomas More, and maybe part of my younger self relished keeping its pleasures all to myself.  Like the band you paradoxically want to succeed and for nobody else to discover, the film engendered possessive feelings. Didn’t the fact that it won the Academy Award for the year I was born somehow evidence that it belonged to me in some particular way? Wasn’t its embrace of a morally superior and relentlessly persecuted Christian character a confirmation (from godless Hollywood no less) of the truth of just about everything I believed?

As I grew older, I became a bit more evangelistic about sharing the film, and a troubling (to me) pattern emerged. Most of the people I found who liked the film as much as I did struck me a sanctimonious prigs with whom I had little in common; most of the people I loved were otherwise indifferent to the film. It didn’t help matters that the friendly critiques were all over the map: the film was too Catholic; the film was too stagey; the film was too misogynistic; the film was not Catholic enough… I developed a checklist of scripted answers to such complaints, much like a teenager being forced to defend Creationism in a God’s Not Dead movie. But when I watched by myself, the flaws became more noticeable. Gradually, I became reluctant to revisit the film at all, afraid that I might have lost that loving feeling for good. I didn’t. Looking back over the film for this series, I still find much to admire. Paul Scofield, Leo McKern, and Robert Shaw manage to make fairly one-dimensional characters look and feel human. The naivete of characters on the brink of and in the midst of political sea changes no longer seems quite so cliche. In fact, the arrival on the world’s stage of another orange-haired adolescent autocrat actually makes the film look better in at least one regard: it has never in my life felt more relevant. Whether it be Wolsey’s “regrettable” abdication of conscience to avoid dynastic wars or Henry’s self-serving insistence that a man doesn’t need a pope to tell him when he’s sinned, the film reminds us that the Church and its defenders always somehow seem to be in more danger from those who would abuse and misuse its powers than from infidels or secularists.

More is too perfect, I’ll grant the film’s detractors that. But the manifestations of his perfection that bother me aren’t always the most obvious ones. When he tells Matthew, the prying, spying servant that he will “miss” him, the film suggests an almost inhuman patience towards human weakness and betrayal. Is there a twist of the metaphorical knife in the way he addresses Matthew? I noted that immediately before, More promises that he will not let any servant go until he has secured them a position in another household. When Alice complains that they can’t find positions for all the servants, he insists they will. More is not only progressive as it relates to women (educating his daughter, Margaret) but benevolent and enlightened when it comes to class issues. In the play, Matthew’s character is part of the “Common Man” chorus, but the film only really addresses class issues to compare More (favorably) to others who wield power and privilege corruptly. Pay attention, for example, to the way Cromwell addresses the potential female witness who tried to bribe More, snapping at her to shut up and calling her derogatory names. More says to the poor he will give them the same ruling he would give his own daughter, “A fair one, and quickly.” The scene that has perhaps changed the most for me over the years has been the final tower visit of More’s family before his death. After commanding them to leave the country he tries to console his wife by complimenting in turn, her cooking and her dress.  “My God, you must think me a fool,” says Wendy Hiller as Alice, in the film’s most brutally honest and sweetly tender moment. Yet even here, when the film hints at or approaches what might be seen as a fault in More, it almost immediately reverses itself by having him unreservedly admit and repent his errors. He is “well rebuked,” he says. There are longer, better arguments to be made about complementariansim than I have time to make here, but it struck me in rewatching this scene, that almost all the people I know who cherish it the most are, oddly enough, men. I wonder whether or not by making the exercise of marital and sexual authority so gentle and benign, the film does the cultural work of supporting the idea of patriarchal institutions and hierarchies whose abuse we see so rampant elsewhere in the film. Okay, I don’t wonder, really. I just wonder if it does so intentionally. What I like most about A Man for All Seasons is More’s mind. There is something deeply, intellectually satisfying in hearing someone, even someone semi-fictional, articulate one’s own ideas more eloquently and forcefully than one could oneself. What I miss in the film — what never quite strikes me as authentic or moving in the hints that I get — is the interior spiritual and emotional world of More that would need to be present to sustain and empower one to act on those great ideas. When he is defending himself, More continually claims not just that he has been silent about the king’s supremacy in the church but that he has been the king’s loyal subject, praying for him and wishing “none harm.” We do see one early prayer where “…and bless our lord, the king…” is a perfunctory afterthought. And we do see More kneeling in prayer outside the courtroom before his final trial. But for the most part, the relationship between More and God remains (for me) an abstraction, something that is posited, alluded to, easily inferred, but never quite witnessed.

Maybe that’s not fair. This isn’t a Bresson film, and prayer is one of the least cinematic acts men can engage in. But I think the script only really works if you understand at key moments that intellect and legal acumen are just the surface armor of a man who relies finally on love and devotion. In the end, More tells Margaret, his dissent is not a matter of duty but of love. When it comes to talking about that duty and that love, the script is dazzling in its erudition. When it comes to making it look and feel real, as though such love actually exists, the film’s reach perhaps exceeds its grasp.

That doesn’t make A Man for All Seasons a bad film. Just maybe not my favorite film of all time any more.

Tags: A Man for All Seasons, Fred Zinnemann