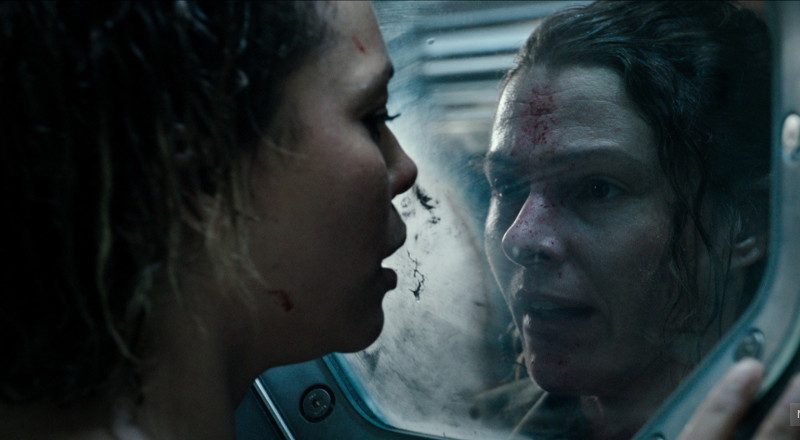 In the thirty-eight years or so since I saw Ridley Scott’s Alien for the first time, both the movies and I have changed a great deal. I was too young (thirteen) to love the haunted house in space flick, so I can’t as easily attribute my discontent at Alien: Covenant to nostalgic attachment to its predecessor.

Aliens came out when I was old enough to fall in love with a movie (twenty). Additionally, it was the first film I ever reviewed — for the Mary Washington College Bullet. So I preferred Aliens — still do — but I understood the arguments of those who thought its predecessor a better film. Back then we thought in terms of sequels, not franchises, and it was more or less understood that apart from a cast of characters and a basic premise, we didn’t expect subsequent films to be of a piece in the same way that we expected (in vain) some more seamless continuity from Star Wars.

All of which is to say that I get that Alien has been a lot of movies for a lot of different people and that there is no way to please all of them when dishing up subsequent servings. (It is probably equally true to say there is no way not to please some of them, because some of them may well be pleased by anything with Scott’s name on it and the presence of a chest-burster.) I am puzzled, though, by claims that Alien: Covenant returns to roots of Alien’s greatness. I found Covenant an unsatisfying patchwork of elements from various franchise films. The plot (spoilers, ahead, I guess) is that the Covenant is a colony ship headed to a new planet with a crew of families and a bunch of “second generation” embryos. When an in-flight storm forces some crew members out of hyper-sleep early, they hear a transmission from a nearby planet where they figure the grass just might be greener…not! Instead they find wheat, the Android David from Prometheus, and answers to a couple of questions about the Engineers that we weren’t exactly speculating about with the same intensity as we did the identity of the “other” Skywalker or who shot Mr. Burns.

Speaking of the Engineers, the film only really gestures at their presence. It’s much more interested in David, the synthetic from Prometheus than in any of its human characters. That points to a weakness that has plagued the franchise ever since the end of Aliens: character development. Alien was suffused with dread. The body count in Covenant is higher and the stakes astronomically higher, but it also comes in an age where Marvel movies and Star Wars movies have numbed us to the alleged peril of extinction level events. There is a scene fairly late in Covenant where a malignant presence stalks a pair of humans taking a shower. It’s indicative of the franchise’s gradually giving itself over to horror-porn conventions that I had no real clue who these characters were, what their relation was (if any) to other principals in the story, or whether I was supposed to. Other characters get more screen time, but they are no less human punching bags than are any of the extras. To distinguish them one from another, they are given either single sentence bromides about faith and reason or cowboy hats and eclectic names. Prometheus and Alien: Covenant are like a Star Trek universe composed of nothing but red shirts. Look, I never thought I’d be typing this sentence, but in the abstract, I think a film needs to be about something more than just the survival of the human race to have any sort of suspense or dread. Prequels also bring with them a certain sort of narrative inevitability that might engender pathos but rarely invites suspense. (The Planet of the Apes reboots labor under this same problem.) Origin stories are first-act precursors to the the real story about the people we actually care about.

Stories we care about also generally tend to be ones that have resolutions. Resolutions don’t invite (much less require) subsequent chapters, so even previous resolutions must be undone once a successful film becomes a franchise. (The Terminator franchise labors under this same problem). And the nature of franchises is that studios need them to be serials, so (Aristotle be damned) there can be a beginning and a middle but no real end. As a result, no episode, not even the first, can be ascribed any real significance. The prequels aren’t explanations or revelations of first causes so much as first iterations of the same musical chorus — links of a never ending chain. That’s why a decisive defeat of or escape from the aliens would be about as surprising as a cataclysmic defeat followed by two hours of dark screen. Since the start of Aliens, the franchise has cared a lot less about what happened in any particular movie than in what might (but won’t) happen in some theoretical subsequent movie. In the meantime, here are a bunch of bodies being ripped apart in painful and horrific ways for your viewing pleasure.

I’ll be joining the gang at InSession to podcast about Alien: Covenant tonight, so be sure to check back at their site for more discussion.