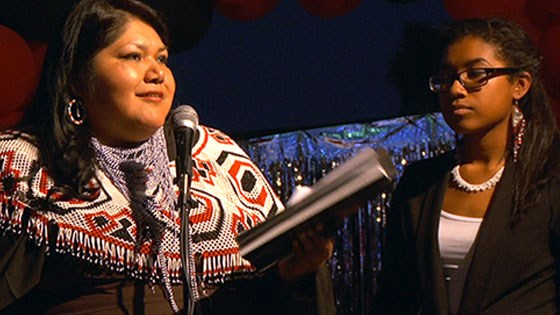 The procedures of the courts and the justice system are often taken for granted and never truly examined for their efficiency by most  people in the U.S.. While there is a large focus on the rights of both the criminal and the victim, there is little to  no consideration of the best way to heal all who were involved and to rehabilitate the criminal, but Native American Tribal court judges are trying to change that.

Tribal Justice, a documentary by Anne Makepeace, follows the efforts of two Native American chief tribal judges, Abby Abinanti of the Yurok tribe, and Claudette White of the Quechan tribe, as they try to use the Native American ideas of restoration and healing to not just punish the criminal but to restore them, their victims, and the community, back to a healthy and productive state. The film primarily follows the cases of three different tribal families from the Yurok and Quechan tribes in southern California and shows how exactly the tribal practice of restorative justice is approached. Makepeace does a pretty good job of showing the struggles of these families and individuals through footage of them in their communities and homes, though at times this can almost seem a little excessive and reality television-esque. Regardless, the footage does a good job of showing how out in the community these are good people who want to better themselves and are trying to take advantage of that opportunity, but in the home the unseen pressures (though not unseen to the audience) that haunt the majority of Native American communities begins to rear its ugly head.

The goal here is to break the cycles of domestic, drug, and alcohol abuse that have infected the Native American communities through decades of cultural displacement and meddling by state and federal governments.  The Native American approach to criminal justice is the opposite of the state court approach; while state and federal courts take great pains to ensure that one is tried and judged by strangers, the Native American courts prefer to have an offender tried and judged by their own communities so that they can better understand the individual and their circumstances, allowing them to better judge if someone truly wants to change and have a better life.  This obviously has limits, and the film manages to fight off a large criticism that may be leveled against it by including the case of Claudette and her nephew Issac and showing that due to her extremely integral role in the case that she is not fit to be the judge, but another judge from the tribal court community that is familiar with all of them is. The film also understands that this system will not work for everyone and does not claim that it will. Out of the three cases primarily shown two of them turn out well and the third, the one involving Claudette, ends with Issac throwing away his chance to have a better life.

While the documentary does a great job with development of the people and cases that they are following, it is lacking in development of the judges themselves and their motivations to pursue this system of justice over the usual probation/jail time business. The beginning of the film introduces Claudette and gives a particular emphasis to her love of the character Wonder Woman, showing that she owns a keychain and has a large tattoo of the character, but never taking the chance to describe how her love of the character could inspire her work in restorative justice.

While the film is seemingly advertised as an advocacy film, it does not come off that way to the viewer. Instead, it approaches the subject as if restorative justice is an idea that Westerners have never thought of, let alone tried. The film could have been a much more powerful piece if it had focused on exactly why restorative justice is a better system for handling crime, showing how the Native American communities are better for using it and why the Western justice system should try implementing it in more ways. Despite briefly mentioning domestic abuse as an offence that restorative justice could help to heal and break the cycle of, the film does not tackle it or other more controversial offences that restorative justice could potentially be applied to such as murder. Instead the film simply plays it safe and covers people with offences such as drugs and theft, and in one case the drug use of a minor; something very few in society would object to.

Overall, Tribal Justice is a decent film that gives the viewer a good glimpse of the issues that plague the Native American communities throughout the nation and how they try to take care of their own people their own way, rather than putting them through the state court systems. While the concept is solid and has potential, the film simply doesn’t dig deep enough into its subject matter to make us truly care enough about it to try it in our own lives and court systems. With the idea of restorative justice on the rise in the Western world (it was notably mentioned many times at the 2017 NCICU ethics bowl), the Native American community is going to need to make a much deeper and more thoughtful case for their ideologies towards justice, and pretty quickly, or they may simply become something that planted the seed of an ideology to be explored and implemented further by Western society in the future.