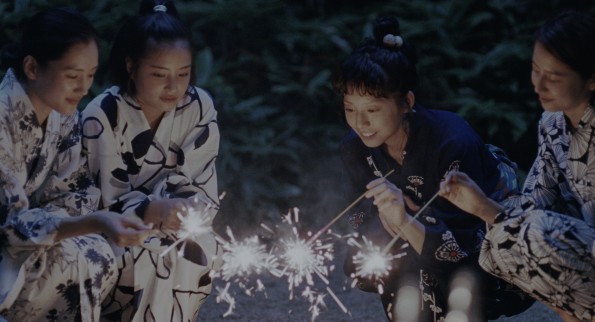 Hirokazu Koreeda is one of the rare directors of whom I can say that he has never made a film I didn’t like.

That makes the fact that I liked Our Little Sister better than any of his other films all the more satisfying. The film has Koreeda’s leisurely pace and exquisite yet simple visuals. But it is a little less sad than some of the director’s other works. His characters, while pained by life, are more at peace with some of their decisions. While the film acknowledges the hurts that loved ones inflict on one another, it also reminds us that there great joys and satisfactions that come from the relationships we forge.

Sachi, Yoshino, and Chika live together as sisters. Their father left them years ago, and they are more or less estranged from him. Sachi, the oldest, harbors a natural resentment which nevertheless pains and shames her. It is not what dutiful daughters should feel. When word arrives that their father has died, the daughters reluctantly make the trip to the funeral. They are met at the train station by Suzu, their precocious half-sister whose impeccable manners and whispering demeanor masks some pretty deep scars of her own.

At first the is natural tension between the siblings. Then Sachi makes a small, impulsive gesture of good will. This is followed shortly thereafter with another, this one much larger. Soon the sisters’ lives are intertwined in ways they did not imagine when they boarded the train for the memorial service.

There are three qualities to the script that made it particularly delightful.

First, every time I thought I knew where the story was heading, it surprised me by going in another, equally plausible direction. The early trip, as reminiscent as it was of the end of Tokyo Story, led me to expect some sort of pained reflection on the past rather than a treatment of how its reverberations are felt and dealt with in the present. One or two early scenes led me to suspect a greater gender breach, with the absent father only the biggest example of men’s villainy to women. There turn out to be male characters who are sympathetic from the get go and others who emerge more sympathetic in time. We think, perhaps, that Sachi’s decision will be met with anger or resentment on the part of her siblings, that this will turn into a Cordelia versus Regan and Goneril feud. It doesn’t. Each character has moments of grace as well as flaws, each has something to offer her sisters.

The pace in Koreeda movies always feels leisurely, yet by the end it is amazing how much ground is covered. Rather than building towards one big reveal with a lot of exposition, Koreeda’s films snowball gradually, with each small gesture creating deeper resonances as we come to know the characters better.

But ultimately what truly elevates the film for me is its depiction of virtue. It is hard to write and depict goodness and make it look believable. It may be hard to tell at points where duty ends and desire begins, yet we see clearly that good deeds, even when done with mixed motives, rarely fail to bring us more in joy than what they cost us in effort. Our Little Sister encouraged me because Sachi was a realistic character who, through her regular attempts to do what she thinks is right and loving, made me believe that virtue is possible. If she could be the best version of her self, why not me?

Like Samantha in The Kid With a Bike, Sachi doesn’t spend a lot of time explaining why she makes some of the choices she does. Because her reasons not to do some of them are clear, her silence draws our attention to our own surprise, making us wonder that we should wonder or need to have explained why someone would love “the least of these.” As George MacDonald once wrote, to be kind neither hurts nor compromises. Even when Sachi’s kindness is karmically returned to her, it comes not with the results that I imagined.

One small note for Christian readers. At one point, two of the characters discuss “god” and why he allows pain and suffering to occur. Some might take offense at the conclusion that if god can’t figure things out, humans have to. It is true that as a Christian, I would want all characters to know the author of goodness and the model for the virtue of which their best selves are but a reflection. I was moved, though, at their commitment to try to bring relief to the suffering of others, even in the face of god’s (as they understand him) silence.

Our Little Sister (★★★★★) is a special film, one that I will return to before the year is over and treasure the memory of as years go by and festivals blur one into another. It is a masterpiece from one of cinema’s quiet giants.