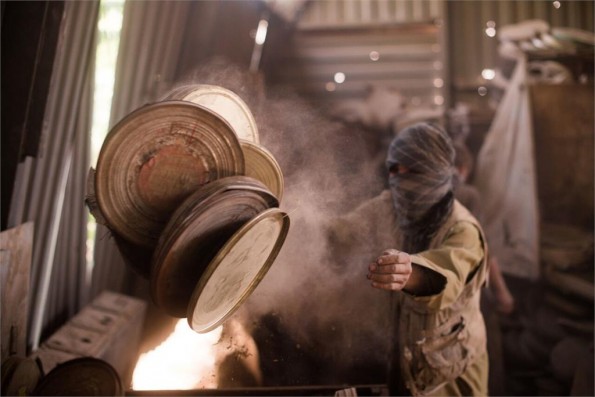 A Flickering Truth is one of those documentaries that occasionally makes you feel very small–not because its subjects are larger than life but because they, in their smallness, are facing tasks so daunting that you feel overwhelmed on their behalf.

In this case the task is film preservation in Afghanistan.

The film begins en medias res with a warehouse that looks as though it has been bombed or ransacked or both. One man is trying to hire workers to begin a lengthy clean up. They haggle over the price and soon this relatively simple transaction gets bogged down in seemingly endless demands. Is this a metaphor for trying to get anything done at all in a war ravaged country?

The  man is Ibrahim Arify  Once imprisoned for film making, he managed to get his family to Germany. He says in the film that his sons have never been to Afghanistan; it is too dangerous. Yet he returns, risking his own freedom and enduring long separations from his own family to try to preserve and protect Afghanistan’s film history.

Problems abound. Equipment is incredibly expensive relative to the Afghan standard of living, leading to possible thefts. Arify has to circulate like a supermarket manager to ensure the people he is paying are actually working. (In one scene so maddening it is almost humorous, a worker instructed to organize books on a shelf stacks them with the spines facing the wall so that none of the titles can be read.) Testimonials are made of the Mujahideen burning films and threatening to kill all witnesses who do not participate. Elections threaten to derail the incremental progress made. And every time the national film archive (a projector, a screen, and a van) hits the road, they risk their own lives as well as their equipment.

Why do it? Because films are made to be seen. One of the more remarkable aspects of A Flickering Truth is that the paucity of resources doesn’t make the Afghans put all their effort into protecting the films by locking them away in some vault or spiriting them out of the country. Rather they take them to villages, announcing via an intercom that the villagers can be “entertained and educated.” Director Pietra Brettkelly’s own camera watches the crowd, faces transfixed, as the flickering lights remind them of their own heritage. Women and girls in head scarves see films–Afghan films–from a time when a woman could wear a sleeveless shirt. (Today, one interviewee claims, a woman showing her ankles might face punishments unimaginable to those living in other areas.) Young boys and old men see artists from not that long ago speaking directly do them through their art.

Brettkelly told audiences at the Toronto International Film Festival that this was a documentary about cinephiles and for cinephiles. That’s true, but I think it is also something more. It is a film that makes us stop and think, whatever our feelings about film as an art form, what it is we cherish most in our lives and value most in our cultures.

And what we would do to preserve it.