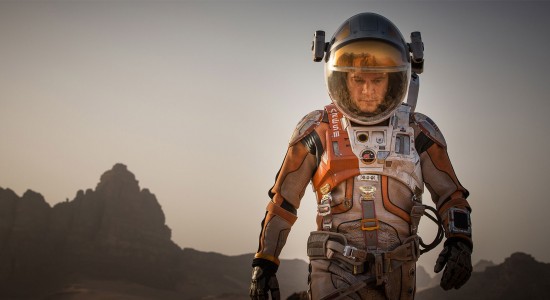 It should not have been that hard, I think, to make a fully satisfying film version of Andy Weir’s The Martian.

But Drew Goddard’s script goes a bit too far in simplifying the science, keeps every bit of Mark’s sass, and inexplicably alters the climax to give one actor a more central part in it, thereby undercutting one of the story’s true beauties (its emphasis on collaboration and teamwork).

If you have read the book or seen the trailer, the premise is simple: Watney is left for dead on Mars after a sandstorm rips through his suit and knocks him away from his stunned colleagues. Only a freak bit of good luck saves him. Once back in his temporary shelter, he has to figure out a way to communicate with his home world and stay alive long enough for NASA to send enough food to tide him over until the next manned mission to Mars. 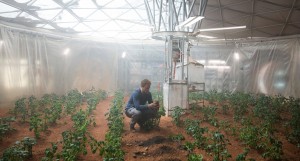 The execution of the plot is a tour-de-force of complicated physics rendered (mostly) comprehensible to the lay person. The physics and chemistry is dizzying at times, but the concrete nature of the details is what infuses the story with its wonder. The things Mark has to know and the steps he has to take to put that knowledge to work is humbling to the reader. It constantly reinforces the monumental nature of the astronaut’s task.

What we get in the film is moderately pared down narrative and extremely pared down exposition. We see Mark digging dirt and planting potatoes in a montage, but we do not get a feel for the backbreaking nature of the work. We are told Mark retrieves a potentially radioactive power source originating from the rocket in order to increase the power in his rover, but we have no idea how. A mid-plot episode where an airlock fails is reduced to Mark putting duct tape on his helmet and plastic wrap over the (not collapsed) habitat. A second dust storm that in the novel threatens Mark’s travel to a possible rescue site is eliminated completely in the film.

The list of simplifications goes on. Truthfully, none of them are unacceptable on their own, but the sum total alters the story’s emphasis. Mark is a quick thinker who has resources that mostly work on their own, so he has to troubleshoot and improvise. What gets lost is the scope of the technical knowledge required to execute these improvisations.

Meanwhile on earth, NASA officials pull their hair and argue over possible rescues. The film does use voice-over to explain how Watney got some computer code, but for the most part we are left with the impression that he could have done just as well at staying alive without them. That’s a shame, because the book’s coda was very much about the entire world working, not just cheering, for one man. The aforehinted alterations to the climactic episode, while small, further chip away at the story’s emphasis on interdependence.

And yet…there is just too much good stuff here to keep the film from getting buried. Damon is exceptional in the scenes where the bravado and dark humor are punctured. A scene in which he prepares a final message for his parents in case he doesn’t make it (when he pretty much thinks he won’t make it) is genuinely moving. One wishes there was more of that so that the comic relief would be the relief rather than a constant backdrop.

The rest of the cast is also excellent, though the pared down version of the story means less screen time for any of them, and those who can do well without speaking–Jeff Daniels and Mackenzie Davis–fare better.

I appreciated that the film backs away from Mark’s callous Atheism/agnosticism. A scene in the novel in which he mockingly burns a colleague’s crucifix while joking he feels vulnerable to Martian vampires is altered to have Mark address Jesus on the cross and say he believes that God will understand and forgive his action given his current situation.

Towards the end I was ready to forgive all the streamlining and predict that The Martian would end up somewhere on my annual list of Top 10 favorites. But the end was a tipping point as far as my own reader-response. It was small, but it was so needless. Then the needlessness of it left me wondering if Scott, whose films post-Blade Runner have been good but keep getting watered down, has lost faith in his audience to accept or process the least  bit of thematic complexity. The film’s epilogue reads less like a humbling celebration of human cooperation and more like a motivational speech from a veteran selling American exceptionalism.

Mark has the right stuff, there’s no question of that. But what that stuff is might be something Ridley Scott and I don’t entirely see eye-to-eye about.

Three stars for being good. One frowning emoticon for not being great. 🙁