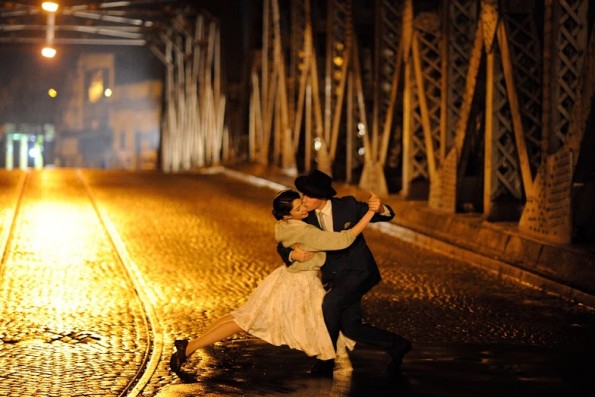 Our Last Tango would be worth watching, if only for the dance sequences.

Actually, it is worth watching pretty much only for the dance sequences.

German Kral profiles Johana Copes and Juan Carlos Copes, a pair who have made their lives together, for better or worse, on the dance floor.

As a couple, the two are actually a little…sad. Johana says early on that she would change nothing in her live. Then, after only a slight pause, she adds one exception. She wouldn’t be with him.

Juan Carlos talks about taking a table they danced on and making it higher because the prospect of a fall frightened Johana and because…well maybe that was the only reason.

I wouldn’t want to take couples therapy, but when they dance it is a different story. Kral makes liberal use of archival footage from the Copes’s career, but the highlights of the film are unquestionably the reenactments. While Juan Carlos or Johana describe a scene from their youth, another, younger couple will enact it through dance.

Given the couple’s personal issues, I might have liked to see a bit more reflection in the film. How does the relationship between partners affect the dance itself? We are told that Johana was better, both than Juan Carlos and his other partners, but we aren’t always told what being better consists of. Is personal chemistry indescribable, or does technical merit compensate as the chemistry changes? In one revealing scene, Johana instructs a younger dancer that she isn’t “looking” at her partner. She also has some thoughts about when to be close and when to have a little separation between the partners.

One can hardly fault the Copes’s for not being as expressive with their words as they are through their art. Or for not having as much footage to provide as the younger generation. As a documentary profile, the film is just so-so. But as a performance record, it is a blast. Even if you know next to nothing about dance–I can tell it is tango by the music, though I’ve never danced a step–you can sense instinctively that you are in the presences of elite artists

At one point the couple reflects on watching Singin’ in the Rain and imagining themselves to be Gene Kelly and Cyd Charisse. That emulating the latter rather was Johana’s wish rather than being, say, Debbie Reynolds, tells you all you need to know. Five minutes of dancing can be worth ninety minutes of talk. Fortunately, Our Last Tango gives us a lot more than five.