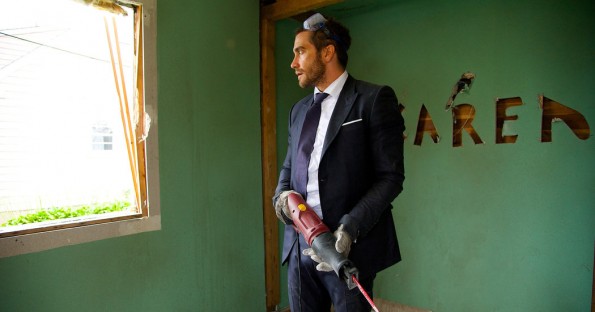 Demolition (★★½) is not likely to be anyone’s favorite film from TIFF 2015. Or, at least, I am confident it won’t be mine. There were some muted gasps in the auditorium at plot reveals that weren’t particularly shocking but which did speak to some engagement with the film.

Jake Gyllenhaal gives another solid performance, this time as a financial something or other (he wears a suit and confesses in a voice-over that he deal with intangible numbers, not actual products) who is stuck in one of the stages of grief or the other (anger, most likely).

He processes his inexpressible feelings by befriending other hurting people, especially an adolescent with gender-identity questions, and by wreaking havoc on property in any way he can. Early on his father-in-law makes a casual aside of breaking things down so as to reveal their hidden meaning, so Jake’s (excuse me, his character’s name is Davis) wrecking ball antics are meant to be vaguely clever in a writerly sort of way–see the symbolic is being enacted literally!

Director Jean-Marc Vallée (whose Dallas Buyer’s Club I greatly admired) spent most of a ten minute introduction at TIFF praising the script, so of course I thought that the weakest part. This isn’t terrible, but there are so many better films, large and small, about grief, that its sense of its own profoundness was a bit grating.

I wonder if directors know what the weak spots are and, like politicians, try to get out in front and create the narrative. Vallée did also spend a portion of his time telling the crowd at the Roy Thompson Hall how much the audience yesterday liked the film, which seemed odd.

That said, the Canadian director always gets strong performances, even in the films I end up being less enthused about (Wild, The Young Victoria) and this time out is no exception. Chris Cooper and Polly Draper both give strong support–so much so that I almost wished the film were about them. Ultimately, though, this is a Gyllenhaal showpiece. While he is not as memorable as he was in Nightcrawler, he continues to show a good eye for different projects

Demolition begins with the conceit that Gyllenhaal’s character is writing a letter of protest to a vending machine company that stole his changes and didn’t deliver the candy. It takes an actor of considerable skill to play such scenes straight and come out unscathed on the other side.

This one is worth scene for the performances, and who knows, it could get award push just because Gyllenhaal is so terndy right now. Overall, though, I thought it was a film that could wait to be rented at Redbox.