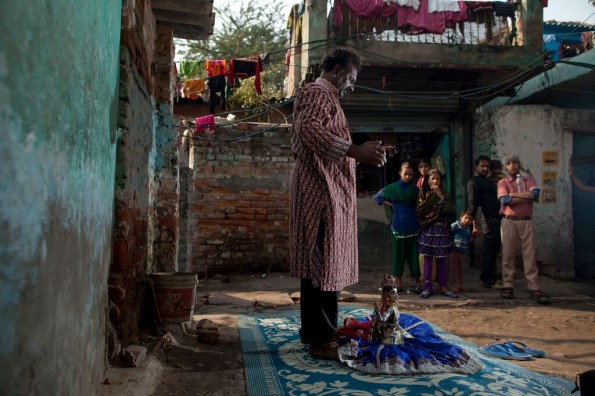 Documentaries can often feel dishonest and staged and because of that, I often find myself consciously fighting my cynicism when I watch them. This is especially difficult when a documentary depicts a rebellious movement, complete with group meetings involving the “bad guys.” Tomorrow We Disappear does have these elements, but it balances them by showing multiple sides of the issue. It is a well-crafted story that finds a way to break down a heady, philosophical dilemma into tangible bits. Those bits are characters; people who are involved in this story are the ones who tell it and the documentarians don’t let themselves get in the way.

The issue at hand is one of industry in conflict with tradition. The Indian Government wants to modernize and build high-rise apartment,s and the land they want to start developing happens to be the Kathputli colony. The Kathputli colony is government owned land that was settled generations ago by performing artists (magicians, musicians, acrobats, sword-swallowers, puppeteers, Ripley would have a field day.) Since then, the artists have built homes, raised families and created a whole way of life. The Government sold the land to developers who guaranteed flats in the new high-rise for those in Kathputli who cooperate. 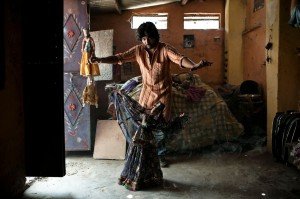 The film follows three artists who end up on three different sides of the issue. This structure allow the audience to experience the full spectrum of who these people are without being completely overwhelmed. Puran Bhatt is a national-award winning puppeteer who feels that the community should fight against the government take-over and resist signing up for the flats. Maya Pawer is a young female acrobat who is actually looking forward to the possibility of change. She sees signing and moving into a flat as an opportunity to pursue her dreams of education. And right in the middle is Rahman Shah, a street magician with young children. He is good friends with Puran and wants to fight against the flats, but his resolve weakens when he is continually kicked off the streets and not allowed to perform for money.

As the inevitable looms closer and closer, Puran explains just what he is fighting for and why he thinks it is important. The Kathputli colony is more than a slum full of poor families, it is a community of heritage. Puran tells the audience that these arts were handed down generation to generation and represent a huge part of India’s cultural heritage. Kings and diplomats were entertained by the ancestors of Kathputli, and this is the tradition that Puran wants to maintain. Puran speaks fondly of his father who taught him the art of puppeteering and looks on history fondly. Maya, on the other hand, speaks of her upbringing almost bitterly. Acrobats in this community are chosen almost at birth and taught to contort their bodies from a young age. She expresses the desire to leave Kathputli and for the colony to abandon these traditions.

Showing us characters with different perspectives makes the documentary as a whole feel less “preachy” and while some of it was clearly staged for dramatic effect, there was a balance to the entire story. It was not a message beaten over the audience’s head of “capitalism: bad, poor people: good.” 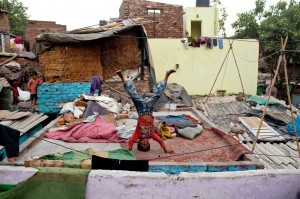 Ultimately the colony is forced to relocate to temporary housing until construction on the high-rise is complete. The documentary leaves us with a defeated Puran walking around a historic exhibit at a museum. The exhibit is basically a recreation of Kathputli, only it is hollow. Puran asks an attendant if he can sit down on it, but the attended politely explains that it will fall apart if he puts any weight on it. It’s a powerful metaphor for the fragility of tradition and the power of memory both to preserve and destroy.

Just as with the hollow recreation of Kathputli, memories can be poor and fragile representations of what has been lost. Throughout the film, the artists are constantly afraid of being forgotten. The title reflects this, and it is a mantra repeated by the elders of the community. The film forces the audience to wonder what have we ourselves created hollow models of? What traditions have we left by the wayside in favor of progress, and, perhaps more importantly, who have we left behind? The documentary is able to ask these questions indirectly, which is a hallmark of good filmmaking. A good documentary finds the story at the heart of an issue and causes the audience to expand that narrative outwards and apply it to their own lives. Tomorrow we Disappear does just that.