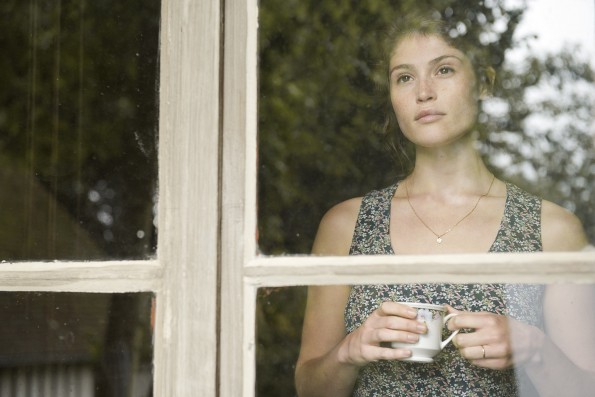 Anne Fontaine’s Gemma Bovery is one of those films I see at The Toronto Film Festival, enjoy, and then somehow never hear from again until it pops up, unannounced on Redbox or streaming on Amazon.

Sometimes it is easy to figure out why such films don’t find an audience–too small, too indie, too foreign–but at other times the vagaries of film distribution are maddeningly opaque. So when Music Box Films announced a DVD release, I welcomed the opportunity to revisit the film and see whether or not my initial affinity was overstated.

The answer: maybe a little. Gemma Bovery (★★★) is a fine film. In retrospect I find it all the more interesting for avoiding a too-close parallel to its literary namesake. And yet…after an exquisite first twenty-five minutes or so, I did find my attention lagging a bit. And while I appreciated the film’s refusal to turn Gemma’s infidelities into some sort of feminist diatribe against her husband or the system, its inability to convey much of anything about the titular character’s interior world keeps us largely at arm’s length. 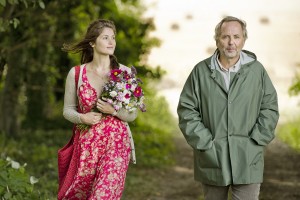 I have heard a few complaints that the film is too male-gazish given that it has female star, a female director, a female screenwriter, and is adapted from a female’s graphic novel. Yes, Posy Simmonds is doing a riff on Flaubert’s masterpiece, but the relationship between Gemma and Emma is more tenuous than even that between Tamara Drewe and Bathsheba Everdene. This really is Simmonds story more than it is a modernization of Flaubert’s, and while Fontaine certainly knows how to shoot Arteron in such a way as to draw attention to where Joubert’s gaze is landing, her purpose in doing so is to tell us something about Joubert rather than to simply revel in Gemma Arterton’s beauty.

Therein, perhaps, lies part of the film’s problem. Title, aside, this is really a movie about Joubert, not about Gemma. Joubert (Fabrice Luchini) is a baker who is intrigued by the English couple who move in to a run down house next to his residence and shop. That her name is Gemma and his Charles evokes in him a curiosity about the couple. As he becomes aware that Gemma is conducting an extramarital affair, Joubert begins to worry that perhaps her story will parallel her namesake’s in other, more tragic ways. (One of the film’s running gags is about Joubert protesting Emma should not use rat poison to kill field mice since it has arsenic in it.)

A less ambitious film might drift along, content with simply being clever at referencing the literary plot and making the audience feel clever for recognizing the parallels. But as with Tamara Drewe, Simmonds seems more interested in using the literary parallels as starting points rather than as the end-all-be-all. Both texts have a self-conscious, metafictive quality born from having major characters who are writers or readers. Our relationship to literature, the ways in which literary stories shape our perceptions and preoccupations, is a common theme in both of Simmonds’s works. Here, Joubert even tries to get Gemma to read Flaubert; she recognizes some kinship with the tragic figure but dismisses as silly his fear for her own safety. Do you think I would kill myself over some debts, she asks? “I am not that woman. I ‘m me [….] I’m free.” 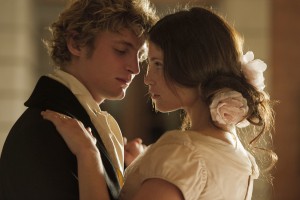 Is she? Are any of us? On the surface we might think so,but  two structural features make us hesitate. The film is told in flashback, so in a very real sense, Gemma’s fate is determined. Also, the story is set in motion by Joubert reading Gemma’s journal, so we are never sure which scenes are as Gemma described and which are products of the baker’s overactive imagination. Even if Gemma could escape the male gaze, there is no way to escape the male imagination.

Overall, I tend to think ambition a good thing. Ultimately, though, Gemma Bovery feels a bit too ambitious. Perhaps the greater success of Tamara Drewe might stem from the fact that, paradoxically, Far from the Madding Crowd is a lesser (though still good) novel. “How to kill someone else’s affair when it brings you grief?” Joubert ponders. That’s a pretty interesting question, actually, and one wishes the film wrestled a bit more with Joubert’s culpability. Or our own, for that matter. Is Joubert a surrogate author or a surrogate viewer? If the film was going to be about Joubert, it should have gone all the way. Instead it teases us with a number of intriguing but only have baked themes. 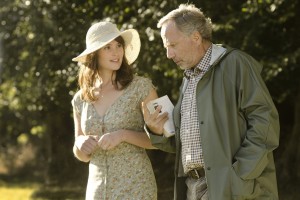 Nevertheless two elements elevate the film despite its script problems. Arterton is terrific–when is she not? She plays Gemma so matter-of-factly, in such a non-actorly manner, that we can’t help but look at Gemma as a normal person rather than a literary “heroine.” Finally, Fontaine’s compositions and camerawork are really interesting. In one virtuoso shot near the film’s beginning, the camera follows Joubert as he walks across the lane to speak with his neighbor. Then the camera zooms up and over the wall separating the yard from the street, giving us a bird’s-eye view of the proceedings. There it waits patiently for Joubert, who has taken the long way around the wall to the gate, to re-enter the frame. The visual symbolism is subtle but clever: the camera can go where the characters can’t, and it sometimes takes characters awhile to catch up. This is probably the first film where I’ve been more interested in Fontaine as director than as writer. (Perhaps one of the film’s unresolved tensions stems from the fact that Fontaine usually seems more interested in middle-aged women while Simmonds is more interested in young women? It’s amazing how much mileage Fontaine gets out of Edith Scob in just one or two scenes.) Ultimately, Gemma Bovery makes me more interested in seeing Fontaine’s or Arterton’s next projects (Agnus Dei and A Hundred Streets, respectiviely) than in revisiting this one, but if you didn’t see it on the festival circuit,  it is definitely worth checking out on DVD.

Gemma Bovery will be available on DVD from Music Box Films beginning September 1, 2015.