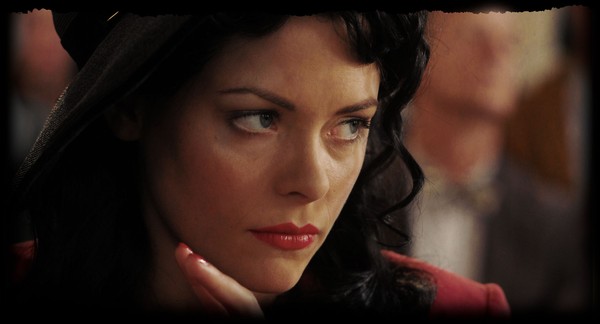 Seldom will one bad scene ruin a good movie. As with most other types of art, if a work is strong, a discordant element will most likely not torpedo the whole enterprise. But there are tipping points in art, just as there are in lives. In those instances, a viewer may not attribute a film’s success or failure to a single moment, but he or she may be able to identify the precise moment where a film won him over…or lost him for good.

But if the performers are game, the script ultimately proves to be too heavy a load to carry up and over the hill. When convicted murderer Toni Jo Henry (Jaime King) is forced to have her hair cut but allowed to keep her lipstick…well, let’s just say that I had a hard time believing the film’s commitment to historical detail went much past transcribing the court records.

Henry’s story has all the elements of a Hollywood drama. Orpahned at a young age, she took work at a factory when she was thirteen and eventually landed in a brothel. A customer, Claude “Cowboy” Henry fell in love with her and married her, but he was subsequently incarcerated for a murder committed before the couple wed. A foolish (desperate?) plot to free her husband goes awry early, landing Toni Jo in jail herself…and looking at death row. While in prison, she is counseled by a priest (T.J. Thyne), who convinces her she needs to “get dunked” and believes her when she proclaims she is innocent of the capital parts of her crimes.

There is a lot of story here, and I am sure that is one thing that would attract a newer screenwriter to this material. (Anton shares writing credit with Sandi Russell, and the two share one previous writing credit, for At Last.) But there is such a thing as too much material, and each act of the film almost feels like its own movie. The representation of the crime tips the film’s cards that it believes Toni Jo’s version of events, leaving the last act nowhere to go except to play the trial as a horrific miscarriage of justice. That may very well be true, but aren’t jailhouse conversions inherently suspect? We know so little of Toni’s character through the first two acts–her prostitution and drug use is glossed over quickly, her marriage represented as nothing if not sincere–that it is hard to fathom why not one but three different juries did not believe her. Other films, both documentary and based on real life, have recognized that injustices (if indeed this was one) often happen in large part because a defendant is unsympathetic. (The Devil’s Knot comes to mind.) 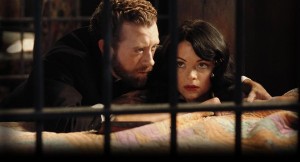 There will be some, I suspect, who might give the film a slight bump for its positive portrayal of clergy and faith. Even here, though, the film is more generic than specific, dividing the world into good Christians, like Father Richard, who believe Toni Jo, and hypocrites, like Toni Jo’s aunt who tell her to say her prayers but don’t acknowledge that sometimes the widows and orphans need more than spiritual platitudes.

Still, if the film did nothing else, it made me queue up Hart of Dixie on Netflix so that I could see more of King.  Toni Jo is so simple and earnest, it would be hard for any performer to flesh out that role, but King at least avoids sending the whole exercise careening into bathos.

The Pardon will be available on DVD and VOD from Monterey Media beginning August 25, 2015.