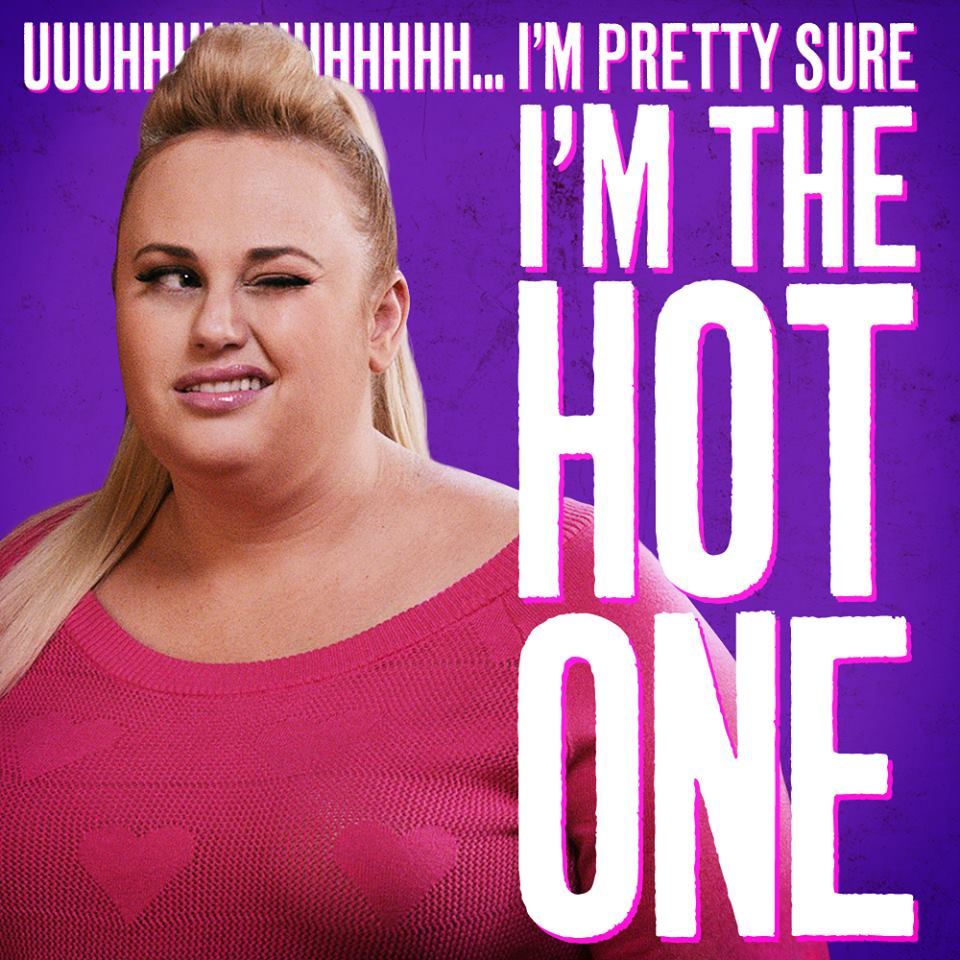 If you’re like me, you haven’t exactly been waiting for the Pitch Perfect 2 trailer to drop with the same heart palpitations that accompanied the anticipation for teasers  for Star Wars or Batman vs. Superman.

I have seen maybe one and a half episodes of Glee in my life.

That said, I will confess to being open to seeing most anything with Anna Kendrick in it, and excepting a bit of gratuitous projectile vomiting, the first Pitch Perfect struck me as a harmless enough riff on Revenge of the Nerds.

That changed when I saw the first commercial for the sequel. It featured a “joke” that is repeated at the end of the film’s trailer, which I’ve embedded below.

A guy asks Fat Amy (Rebel Wilson), “Would you like to have sex later?”

“No!” she exclaims in disgust, and then she gives him a wink.

“One hundred percent ‘no,'” she insists. Then she smiles at him and winks again.

Let’s set aside for a second the whole foundation of the joke: that anything involving sex and fat people is inherently funny. The question of whether or not weight should be a subject of comedic relief or whether (and when) it crosses over into fat shaming is a longer discussion than I have time for–and it is one that is complicated by the autonomy of actors who might legitimately be said to have parlayed their physical appearance into careers in an industry that is is pretty brutal towards those it deems less than physically ideal.

But what’s up with Amy’s “no” means “yes” response to the guy that asks for sex? I saw this trailer for the first time the week a woman filed a civil lawsuit against Jameis Winston, the potential first pick in the upcoming NFL draft. She claims he raped her. He claims she consented to having sexual intercourse. In a transcript from a student conduct hearing at Florida State University, the quarterback is quoted as saying his accuser consented “both” physically and verbally. The nature of that consent was, apparently, moaning while the sexual intercourse was taking place.

So that’s a real case, and this is a movie. Anyone is free to tell me I’m making too much of a joke made in poor taste. It’s worth reminding ourselves though, that Florida State did not find Winston had committed a violation. The statement handed down at the conduct hearing (as reported by ESPN) indicates the two versions of events are “irreconcilable” but that neither statement was “substantially” more credible than the other. The accuser’s lawyers (rightly, in my opinion) point out that “moaning” is not “clear” verbal consent.

Earlier this year Rolling Stone disavowed the credibility for one of its sources, a woman it dubbed “Jackie” in a story alleging a gang rape at a fraternity at the University of Virginia.

Issues of consent, particularly on college campuses, are high-profile because the consequences of false allegations can be devastating. Let’s not lose sight of the fact, though, that according to recent survey data, approximately 1. 3 million woman may be raped annually, and nearly one in five American women say they have been sexually assaulted. In such a climate, it still seems more likely that legitimate victims may be disbelieved than that false allegations will go unchallenged. The Winston case, by the athlete’s own admission, was not a case of he said/she said. It was a case of she said–with her communication being deemed sufficiently ambiguous to excuse the man for believing she meant something else.

It’s hard for me to walk away from a reading of the Florida State coverage without coming to the conclusion that the male in the Pitch Perfect 2 trailer could subsequently rape Amy and claim that even though she said “no,” she actually consented.

Well didn’t she? Isn’t that the joke? Isn’t it clear to everyone watching the scene that she is consenting, even though she is saying “no”? So what’s the problem?

I have a three fold answer:

First, what if Amy, or someone like her, changed her mind? What if she really did want to have sex at the time she was asked but later thought differently? How would her subsequent “no” be distinguishable from her humorous disavowal? If we start allowing “no” to ever mean “yes,” regardless of how overt are the accompanying inflections, we risk a slippery slope with no firm footholds for those who want to stand their ground, sexually speaking.

Second, even if Amy’s intention is clear to us, it’s not clear to the male. Either that or he has been sufficiently instructed in our culture to take “no,” seriously. And that’s a good thing. But when the film doubles down on the joke, it sure feels like it’s making fun of the guy for not getting the message and for not proceeding when the signals are mixed. Imagine wanting to make sure a woman was consenting before having sex with her!

Third, of course, is that even if Amy does want to have sex, her wink undercuts not just her own “no” but that of other women who may be similarly assumed to be joking when they rebuff sexual overtures. When “no” is used humorously to mean “yes,” those who want to say “no” are robbed of what little tools they have to make their intentions sufficiently clear that we as a culture expect them to be followed. The scandal of the Florida State hearing is that the student code in question states that consent must be “clear.” If a communication is ambiguous, a person is supposed to interpret it as a “no.” The Winston case illustrates how, whatever the letter of the law may be, judges, jurors, and courts of public opinion are loath to hold men accountable for misinterpreting unclear communication or for acting apart from unambiguous consent. This hesitation reverses the seeming intent of the policy (as I read it), putting the responsibility on the woman not just to reject the overture but to do so unambiguously.

That’s a chilling thought–or at least it should be for anyone who has a college aged daughter. Its certainly not a laughing matter, regardless of what the authors of Pitch Perfect 2 would have us believe.