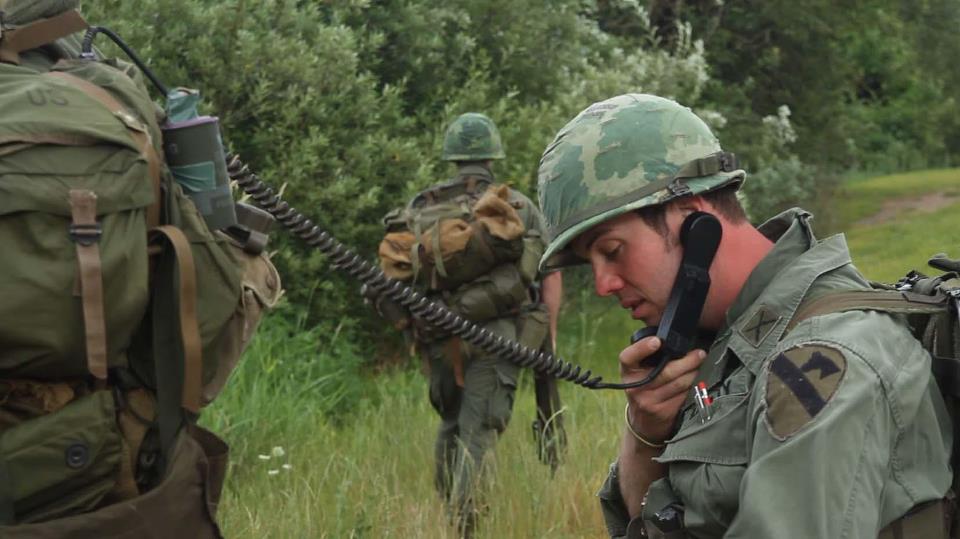 War reenactment…huh…yeah…what is it good for?  “Possibly something,” is the reply from In Country, a documentary tracking a group of Vietnam War reenactors in Oregon.  For this film, offering only tentative answers to this question turns out to be both a strength (in refusing to overtly editorialize) and a liability (in choosing not to press below the surface responses of the “combat” participants).

The boys and men who partake in the recreation of an infantry unit’s slog through Viet Cong territory are a mixed bunch.  Ranging from youngest to oldest, the group includes a high school junior, veterans of our wars in Iraq and Afghanistan, a brewery manager, a zealous collector of military mementos, and a couple of Vietnam vets.

The weekend for these would-be and once-again warriors contains a variety of activities.  Under an army surplus tent, they consider ‘Nam lingo written on a blackboard, reviewing the definitions for words such as “klick” and “dink.”  A leader hands out awards to the real-life combat veterans, expressing gratitude for their service to America.  One of the Vietnam vets scans the men’s uniforms and accoutrements for historical accuracy.

From there, and for the bulk of In Country, the infantry unit heads into the field.  The men traverse farmland, forests, and streams in search of the enemy (that is, other reenactors dressed as Viet Cong).

Effectively interspersed throughout this portion of the film are conversations with the participants about their relationships at home and their motivations for participating in the reenactment.  For one Iraq vet, it’s a quest to retrieve the battlefield adrenaline high.  A soldier who fought in Vietnam longs to plug into the vigor of his younger years.

At different points, the true combat vets speak of how their wartime experiences have affected their marriages, constricted their emotional repertoire, or led to horrific nightmares.  None of the men say this explicitly, but I came away with the impression that replaying war is an effort to gain some mastery over their distressing memories, to control what has so far been uncontrollable.

The directors of In Country do a nice job of avoiding in-your-face opining about the rightness or wrongness of choosing to relive America’s most divisive war.  To be sure, they do show that there is an element of the ridiculous to these reenactments.  I had to suppress a chuckle a couple of times, such as when one soldier breaks from his march to wave to a passerby in a red pickup truck.

The French director Jean-Luc Godard famously spoke of the “morality of the tracking shot.”  In the case of In Country, it’s more about the morality of the editing room.  Co-directors Mike Attie and Meghan O’Hara subtly pass judgment by cross-cutting from the deeds of the reenactors to video footage of similar actions in Vietnam.  For instance, the bloodless “wounding” of an Oregon soldier is contrasted with images of U.S. soldiers tending to a bleeding comrade.

Such juxtapositions raise valid questions about the decency and appropriateness of these stateside war games, whether they sanitize, trivialize, and glamorize something that is terrible, even when just and necessary.  The stakes to this query are raised even higher, when we learn that the high school reenactor has committed to join the Marines, once he graduates.

On the flip side, for the combat veterans, I perceived that these activities offer something therapeutic.  It was very touching to see the respect accorded to the real soldiers by the gents who were only infantrymen for the weekend.  Sad to say, this appreciation is far from the norm in general society, once you leave behind the parades and “thank you for your service” platitudes (please go back and rewatch William Wyler’s powerful post-WW2 melodrama, The Best Days of our Lives, to see how even the Greatest Generation was subject to social neglect and amnesia).

In Country is an impressive debut for both directors.  As alluded to above, the melding of the Oregon scenes with Vietnam footage was quite effective, as were the brief scenes of the soldiers’ lives with their military units and families.  The frequent closeups of the warriors’ faces added intimacy and vividness to In Country, as well.

Attie and O’Hara’s film would’ve been stronger if they’d probed deeper with their interviews, pursuing a richer understanding of the reenactors’ motives, not to mention teasing out any moral ambivalence that they might feel over their participation.  Credit is due them for at least starting the synapses firing on these important inquiries.  Even if these participants are only playing at war, our answers to these questions carry some import for the times when the guns are real and loaded.

(Parents’ corner:  In Country is unrated by the MPAA.  Considering its subject matter, occasional strong language, and some violent imagery, this film is probably not suitable for younger teens and preteens.)