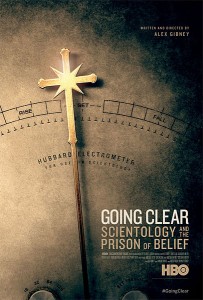 There is a brief but telling moment in Going Clear: Scientology and the Prison of Belief (★★½), Alex Gibney’s new documentary, which is currently playing on HBO.

One of the many former members of the “church” of Scientology is being interviewed,  and she is speculating about how she could have remained so long within an organization whose tenets and practices she now finds repugnant. She mentions the “ladder” structure of the church, where members are esteemed and valued based on their progress through different levels of understanding and achievements. It is sort of like the way the Christian church uses “hell,” she observes.

I expect how viewers feel about that exchange will go a long way toward predicting how enthusiastic they are about the film as a whole. It is grimly satisfying to see the strong-arm intimidation tactics of church leaders exposed, but the broader message may leave a bad taste in some viewers’ mouths.

The subtitle of Going Clear is “Scientology and the Prison of Belief” (emphasis added), a choice which suggests that Gibney has his sights set on an even bigger target than Scientology. In 2012, Gibney directed Mea Maxima Culpa, a similar expose about the Roman Catholic Church’s response to priest sex-abuse scandals.  Anyone who watches the two films in proximity would be hard pressed to not be disturbed by some of the parallels in institutional practice: ostracizing former members, hoarding of great wealth with little to no oversight regarding its use, turning celebrities into leaders and leaders into celebrities.

But if institutions, even religious ones, are not immune from corrupting influences, neither are they all the same. By placing the word “belief” so prominently in the title, the film suggests that the problem is not the object of one’s belief but the belief itself. Scientology is an easy target for lazy attempts to label all belief as equally absurd, equally a result of brainwashing or emotional need. The film carefully cites founder L. Ron Hubbard himself in the claims that he was trying to create a religion for financial gain. And because Scientology arose during a period in the recent past, claims about its creation are more easily supported or debunked than claims–often similar but more often asserted rather than evidenced–about the foundations of ancient religions.

To give the film credit, at one point it does offer up a key difference between Scientology and (most forms of) Christianity: the latter does not hide the content of its beliefs from non-members or require adherents to advance to a certain stage of church participation before having doctrinal truths explained or even revealed to them.

That’s not to suggest the whole movie, or even most of it, is a dispassionate examination of religious belief. The bulk is tabloid fare, as we learn about the church trying to find a girlfriend for Tom Cruise and how ‘sessions’ allegedly designed to help members make emotional, psychological, or spiritual epiphanies end up populating personal files with fodder for blackmail. The part of the film dealing with the church’s battles with the IRS is particularly bracing and scary stuff. If a church can intimidate and ultimately win a prolonged legal battle with a branch of the federal government, how much power must they have to manipulate and punish the average member who simply wants to leave?

Then again, some religions are currently wrestling with the courts over whether or not they have to bake cakes or provide birth control to its employees. So maybe its not as easy as it would appear at first glance to distinguish religions from cults by just looking at their practices. Maybe one needs to examine those practices at the same time one objectively investigates their beliefs. Is it a fair parallel to equate the Christian belief in heaven and hell with Scientology’s adherence to multiple levels of self-actualization? Is faith in the sincerity and integrity of the New Testament gospels and their authors really no different from faith in the veracity of the science fiction novels and self-help books of an admitted mercenary?

The film doesn’t overtly answer these questions, but neither does it leave me with much doubt what its answer would be if the point were pressed. All belief is a prison. Scientology just happens to be the one whose walls are hardest to scale.

10 Replies to “Going Clear: Scientology and the Prison of Belief”