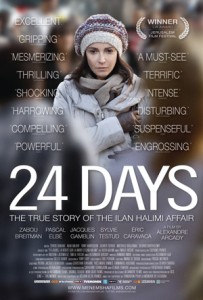 24 Days: The True Story of the Ilan Halimi Affair begins with a piece to camera shot that establishes the film’s journalistic credibility. “It was a cold winter day and my life suddenly fell apart,” a distraught mother, Ruth Halami (played by Zabou Breitman), says. “How could something like this happen in Paris?” she asks. “Yet everything is true. All too true.”

Warning: the following review contains plot spoilers for those unfamiliar with the Halimi case.

24 Days is rooted in a notorious 2006 crime that shocked both France and the worldwide Jewish community. Ilan Halimi (Syrus Shahidi), a 23-year old Jew of Moroccan descent, was seduced by an attractive lure to a Paris apartment block where he was kidnapped by a gang of teenagers. Held for 24 days, he was tortured and starved because the kidnappers believed, based off absurd anti-Semitic stereotypes, that the Halami family was wealthy and would pay a hundreds of thousands of euros in ransom.

This plot of violent extortion was dreamed up and masterminded by Youssef Fofana (Tony Harrison) whose cat-and-mouse game with Ilan’s father, Didier Halimi (Pascal Elbe), is the most compelling part of the film. Fofana makes more than 600 calls to Didier and the Halimi family that overflow with anger and frustration. While Fofana shouts specific instructions (“Wire money to the Ivory Coast in the next day”), Didier’s composure and stability serves as a foil to the man the Paris police refer to as “big, black and dangerous.” Ilan and his father, we learn, became closer and closer in the months before the kidnapping; for Didier, this means negotiations are about saving the vivid future he envisioned with his son.

While Commandant Delcour (Jacques Gamblin) spends day and night searching for his suspect, the mother, Ruth, accuses the police of failing to grasp the nature of the crime. “[Ilan was] chosen by the barbarians because he was Jewish,” she tells Delcour as he and the police continue to believe that crime was solely about money. This subplot, which ends with the police listing anti-Semitism as an aggravating factor in the crime, resonates chillingly in 2015. A report published in April from the National Consultative Commission on Human Rights, a French government watchdog, found that the number of anti-Semitic acts rose significantly in 2014 to 851, from 423 in 2013. These numbers don’t take into account, of course, the deaths of four Jewish hostages at Porte de Vincennes two days after the Charlie Hebdo attacks in January that led Israeli prime minister Benjamin Netanyahu to urge Europe’s Jews to flee the continent.

As timely as 24 Days may be, the film struggles to coalesce into an effective piece of art. Director Alexandre Arcady keeps the narrative under such tight control that plot twists (false suspects, disillusioned kidnappers) seem half-hearted at best. Some of Arcady’s stylistic tics seem particularly puzzling as well. He makes significant use of the fade-to-black, yet this gives the film of the unintended effect of false closure at the end of confrontational scenes. Shouldn’t the movie feel more like a never-ending nightmare?

24 Days also suffers from a lack of emotional depth that stems from Arcady’s decision to prioritize the mystery of Ilan’s disappearance over the contours of a family drama. The relationship between Didier and Ruth, who are divorced, isn’t substantial. While Didier and Ruth seem interesting enough in their own right, they languish in a script that won’t speak in tones that aren’t anguish and grief. Since 24 Days is based off a 2009 memoir written by Ruth, I was surprised that Arcady couldn’t dig up more details about the lives of his characters. We see the terror of the kidnapping, but rarely the mundane struggle of day to day life.

In the real life story and on the screen, Youssouf Fofana is a symbol for violence and evil. But what sort of evil? We know little of his beliefs beyond his desire to make a quick buck and escape captivity. Arcady misses an opportunity to explore the “banality of evil” that lurks behind many anti-Semitic acts in France. Without grasping for the causes of Fofana’s evil, the film can’t help but lead to helplessness. How can we stop the terror we don’t even know?

Still, the Halmi family does have an answer that Jews have turned to for centuries to deal with tragedy: tradition. 24 Days begins with the Halimi family enjoying Shabbat dinner, the Friday night celebration of the end of the work week. After Ilan dies from his gruesome injuries, the film shows the family reciting the Mourner’s Kaddish and sitting shiva. Addressing the camera at the very end of the film, Ruth reminds us that Ilan means “tree” in Hebrew. Ruth says “we planted one in a forest near his cemetery.”

Ruth’s tribute to her son brings to mind the symbolic tree of life in the Torah, which is foretold in the Book of Proverbs to be “a tree of life to all who grasp it, and whoever holds on to it is happy; its ways are ways of pleasantness, and all it paths are peace.” Even as life falls apart, Ruth holds the meaning of this verse close to her heart.