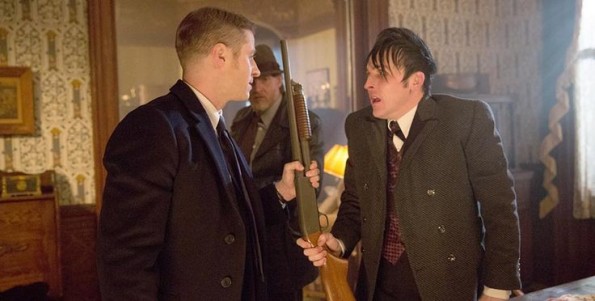 Well acted scenes, rich environments, and  75 years of supporting material should make a series great, but this week I realized one of the biggest problems of Gotham. Normally I would go through this recap and work through the good and bad of the episode. If you are wondering I found it enjoyable like most episodes overall, but it did feel a bit too much like an episode to pace the show before the last few episodes of the season. Even though I enjoyed the episode, like most, this week really spotlighted what I feel is the series’ biggest problem.

The problem could be stated with a one-word question: Why?  Early in “Everyone Has A Cobblepot” James Gordon tells Bullock that he won’t just lay down and go with the system, and in fact, the day he does that is the day he stops being a cop. Refusing to give in to corruption and doing things on the “up and up” is a great character trait. The problem I have realized is that we have no reason to understand why Gordon is like this when seemingly everyone else around him is.

Then there is Fish Mooney, who has shown herself to be capable of master manipulation and a furious will to survive and thrive. Instead of being a prisoner of a “doctor” who provides surgeries to patients using the organs of prisoners he keeps, she is now in a position of authority and privilege at the right hand of the proprietor of this establishment. She is certainly fascinating, but again, we have no idea why she is that way. We almost got an insight to her past when she made up a story about her mother, the revolution that it was made up was supposed to show us how clever she is, instead it just reminded us that we still had no further insight to what makes her tick.

The only person we really understand, oddly enough, is Bruce Wayne. We have seen the tragedy of his life play out, and understand the rest of his world. We know why he does the things he does. However, this is probably the easiest motivation to provide for viewers in that it has been done for 75 years by other writers of comic books, other television shows, and films. At this point, Bruce’s motivation, internal thinking and emotion is quite clear although it doesn’t mean it cannot or should not be explored. Rather, I find more often than not the material outside of the comic books takes this for granted and spends way too much time exploring the villains and thus the Batman show and movies don’t feature a ton of Batman.

Smallville is perhaps something of an albatross to Gotham, in that it was done so well, and really had no predecessor, so that Gotham now sits in its wide shadow. This does not excuse comparing the two though. Smallville went out of its way to answer “Why?”, if even to its own detriment at times. While there were several different plot-lines running throughout a season, episodes tended to feel more focused. Smallville had to establish how Clark Kent and Lex Luthor could know each other so well in the little Kansas town and end up being such strong enemies in the future while Gotham seems to be more about how Penguin rises to power, Gordon becomes police commissioner, and Bruce Wayne begins his own private junior detective agency.

I’ve been very optimistic about the series so far, but I truly believe this is its Achilles heel. There are so many strong and unique characters, Barbara not withstanding, that to have no method to the madness of this world works less and less each week. You could argue that Gotham City simply exists in a state of chaos, so trying to explain it is futile but I think this is a cop-out. In The Dark Knight Returns by Frank Miller, Batman tells Superman during their legendary confrontation: “You sold us out, Clark. You gave them the power that should have been ours. Just like your parents taught you. My parents taught me a different lesson… lying on this street… shaking in deep shock… dying for no reason at all. They showed me that the world only makes sense when you force it to.”  I think it’s time Gotham tries to force itself to make some sense.

My solution mainly revolves around what worked for Lost and so many others which is to use flashbacks and flash forwards, rather than extended dialogue like Smallville  used. What about you? How can Gotham make us really care about its characters?

Tags: Everyone Has a Cobblepot, Gotham

One Reply to “Gotham Episode 1.18 Recap: Everyone Has a Cobblepot”