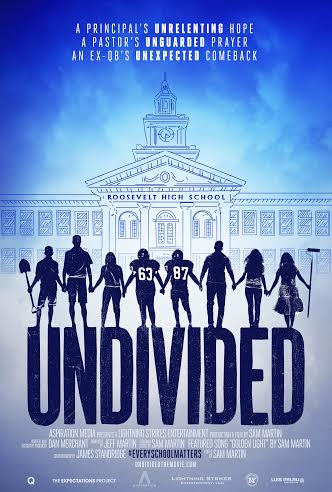 That’s from Kristine Sommer, Director of Outreach at SouthLake Church in Oregon. It’s pretty hard to be cynical about a church that expresses–and lives–such a sentiment or about a film that praises them for doing so. At a certain point in the screening of UnDivided (★★★½), I stopped trying. Sometimes the appropriate response to a documentary is not argument but affirmation. Well done, brothers and sisters.

The film chronicles the way that SouthLake Church “adopted” an at-risk school. Roosevelt High School certainly seems to qualify for such a label. We are told at the beginning of the film that its area of Portland had become a focus of gang activity, particularly as gang members moved north from the Los Angeles area and that it has been targeted for closing.

Here’s some of the stuff SouthLake did to help the school and its students: donate clothes, food, and personal hygiene products for those who couldn’t afford them, provide spaghetti dinners on Wednesday evenings for student athletes and their friends and family. support day-care options for teen parents trying to stay in school, publicize and support underattended sports such as girls’ basketball, and donate assisting coaching time to the football team.

Do we have a problem with a church adopting a school? The students and families at Roosevelt didn’t appear to, even inviting SouthLake to set up an office at the school. The school district in Portland did not appear to, as it identified other at-risk schools and asked SouthLake to help them find other church sponsors to see if SouthLake’s actions could be emulated. At some point there is probably a longer discussion to be had about the tension between the persecution complex at play in films like God’s (Not) Dead and Do You Believe? and the welcome appreciation evidenced in UnDivided. But to write it now would be to try to put Christians like those in UnDivided in a no-win position: be at odds with your community and you confirm the stereotype; work with it, and you are the exception that proves the rule. Or worse, working with the secular, local government makes you suspect, as though embracing the social justice stream of the church’s mandate somehow means you have abandoned the call to evangelism.

And yes, there are probing questions to be asked about SouthLake’s success. Is the program replicable? Will industry sponsors, such as the shoe company that funded the new football field, have the same long-term commitment as the church? What are the underlying causes of structural economic advantages that enable SouthLake to have the plenty out of which it gives, and what can and should churches do to address those?

But there should also be room in this cynical age for celebration. The poor will be with us always, and the quickest way to burnout is to incessantly persist that all good deeds must be parlayed into greater good deeds until we make the perfect the enemy of the good. This point hit home to me during a scene in which former NFL quarterback and Roosevelt High volunteer Neil Lomax related a story about one of his players being late to practice because the vehicle he had to borrow didn’t have a car seat for his infant daughter. When Lomax opined that he could probably get a car seat for the player, I was reminded of volunteering at a crisis pregnancy center several years ago during which the board members responded to a request for help getting a car seat by making its provision conditional upon the new mother attending a certain number of church services. I get that SouthLake probably has more resources than did the start-up that I volunteered for. I get, too, that those running the pregnancy center probably had more requests for assistance than they had money to meet them. In such a situation, prioritizing some needs over others is necessary, and keeping the focus on the spiritual component of your charity’s mission is a legitimate way of prioritizing. I also freely admit that those volunteers had/have a thankless job and were doing more to help the new mothers than was I.

Still, I would be lying if I didn’t say that I wondered what each recipient of “charity” learns about its giver from the conditions we attach to it. Maybe that’s why a documentary like UnDivided is more important for Christians to watch than it is for anyone else. Those most in need of help don’t need to be reminded what unconditional love looks and feels like. Sometimes those of us trying our best to practice it do. And sometimes, it helps to have examples to emulate from those who have rushed in where cynics, wise men, and film critics fear to tread.