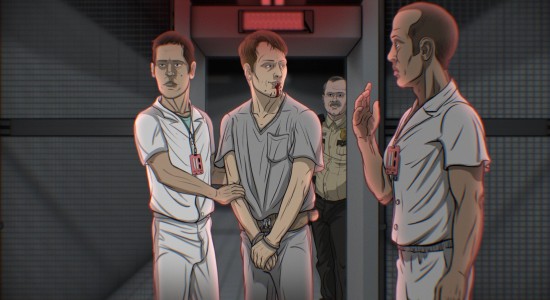 In 1979, at the age of 19, Mark Defriest was arrested for the seemingly trivial offense of stealing tools from his father. He was sentenced to four years in prison. So began Defriest absurdist, tragic experience with the criminal justice system. For the last 35 years, Mark Defriest has been under the supervision of the Florida Department of Corrections. Last December, a Florida parole commission voted to reduce Defriest’s potential release date from 2085 to March 2015. With continued good behavior, Defriest is expected to become a free man in a matter of weeks.

In his new documentary, The Mind of Mark Defriest (★★★½), director Gabriel London painstakingly documents the case of Defriest, bringing to light numerous troubling aspects of our prison system. The story consists of two interconnected narratives. First, London explores the life of Defriest and his infamous escape attempts. Then, with more reflection and persuasion, London shows us the procedural struggles of lawyer John Middleton and psychologist Dr. Robert Berland, who sought to atone for past failures of justice and restore hope to the despondent Defriest. 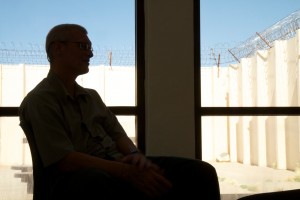 Like many in America’s prison-industrial complex, Defriest never seemed destined for imprisonment. He grew up obsessed with electricity, guns and explosives, interests that were cultivated by his ex-military father. Defriest married Brenda (who he would divorce in prison) young and nurtured an adolescent love for rock music and his truck. The death of Defriest’s father, who he was particularly close to, was a traumatic experience that shaped Defriest’s life. His attempts to claim the tools that his father bequeathed to him led his step-mother to call the police. From there, Defriest entered legal purgatory.

Much of Defriest’s extended stay in prison can be attributed to a record number of behavioral complaints and his many escape attempts (13, including seven “successful” ones). London is fascinated by these various tales, told energetically by Defriest himself. Earning the name the “Prison Houdini,” Defriest once memorized the pattern of a key carried by guard, constructed a duplicate and freed himself from his cell. In another memorable moment, Defriest secretly poisoned the guards’ and warden’s coffee with acid, only to be thwarted when his cell block was locked down. “My file is two-and-a-half feet thick and reads like a 007 James Bond spy novel,” Defriest brags.

As amusing as Defriest’s stories may be, they indicate the psychological profile of a genius troubled by mental illness. In the 1980’s, Berland, the psychologist, ruled Defriest fit to face trial, accusing him of making up his stories about frequent headaches. Decades later, he meets Defriest again, candidly admitting that his diagnosis was mistaken. “What can I say?” he asks Defriest. “There are things you do when you’re young that you later decide were wrong.” If Defriest had mental problems in 1981, then they only multiplied over time. Beating by guards were handed out with regularity. Stuck in solitary confinement, Defriest went ten years without being able to go outside to a prison yard. A report tells us that “conditions seem to be more descriptive of a North Vietnamese prison.” 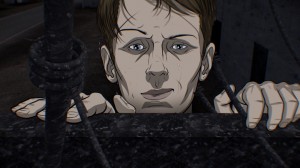 Unfortunately, the pain and horror of prison life isn’t properly conveyed by some of London’s filmmaking techniques. London depicts violent beatings and a gang rape in the form of animated cartoons that lack the seriousness and form to express their intended function. Even if London felt he had few other options (After all, if these atrocities had been filmed, they probably would have ceased long ago), the animations take away from the more intimate and emotionally raw interviews that anchor the documentary.

However, The Mind of Mark Defriest is more than redeemed by its morally powerful core. Recounting his gang rape, Defreist says “I’m already dead. I was a walking dead person. Nothing mattered.” This erasure of identity extrapolated across the entire American prison environment shows a system that is implicitly dedicated to mass violence. In a recent article for The Nation titled “Why Americans Don’t Care About Prison Rape,” Elizabeth Bruening notes that nearly 200,000 Americans were sexually violated in detention facilities in 2011. Particularly vulnerable are the 500,000 prisoners who have a history of mental illness before they were incarcerated. While the film isn’t specifically dedicated to solving the crisis of violence in our prisons, it features the the testimony of Ron McAndrew, a former warden at Florida State Prison, where Defriest was held for many years. “At Florida State Prison, you get punished day after day after day,” he says. London’s film makes the personal suffering of Defriest a universal call for accountability and reform.

Towards its end, The Mind of Mark Defriest remains steadfast in its pursuit of justice, but never triumphant. London makes an appearance on camera, showing how the documentary has mobilized people in favor of Defreist’s early release. However, Defriest’s story will always be a cautionary one of a man who has his potential wasted by a machine-like bureaucracy that treats prisoners as numbers instead of human beings. “I’ve been in prison for thirty years,” Defreist tells us in his last interview of the film. “I’m tired. I want to live some semblance of a normal life.” With the help of London’s empathetic film that dream is closer than ever.