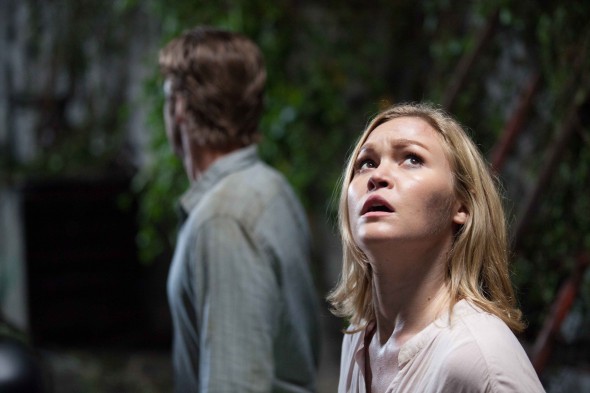 Either Out of the Dark had the misfortune to be released too soon after The Babadook or–more likely–horror films in general are a bit too formulaic for my taste.

Plot wise, perhaps the film more easily references Poltergeist or The Thing. We get an explanation for why people are at a remote location. We get multiple, competing back stories to provide explanations for why things are about to get scary and why those scary things may or may not have a supernatural explanation. As with The Exorcist, there is a preamble showing the final act of the film’s back story. Here, a Colombian man is exiting a residence in a storm but not before receiving a call to burn some sort of records. He hears stuff, maybe sees stuff, and he goes out in the rain to investigate. Within a few moments he is dead.

Cut to the present day. An American couple (Scott Speedman and Julia Stiles) arrive in Colombia with their daughter (who for some reason I didn’t catch appears to be the only one in her family who speaks with a British accent). She is going to work at the local paper factory; he is a photographer. She chats with her father (Stephen Rea) at a social gathering and intimates that there has been a family tragedy that has precipitated their flight to the jungle in order to either escape or wallow in their grief. Then dad looks at a photo of his daughter in the jungle and notices a face in bushes.Do the locals hate the paper mill for some reason? Is his daughter being stalked by potential kidnappers? Is his camera seeing dead people?

One reason I tend to place Out of the Dark a notch below some of the horror films I begrudgingly admire is that I’m not sure the answer to the above questions actually matters. It illustrates the difference between a film with a back story that provides an explanation versus one that introduces and helps develop a theme. The latter sets up a film where the circumstances tell us something about our cultural or universal fears. The former provides a fig leaf of exposition over an otherwise naked attempt to manipulate the audience with jump cuts, loud noises, and the desperate pleas of adults who see children in danger.

That said, I’ll be the first to admit that horror is not my favorite genre to begin with, so noting a film’s conventional qualities is not the same thing as evaluating its efficiency in implementing those conventions. Speedman and Stiles go through the paces with professional grace; Rea isn’t bad, but he’s also not on screen much.

The second half of the film entails dad hunting down their missing daughter while mom connects the clues/dots that explain why (and by whom) the daughter was taken in the first place. At one point, Stiles is hanging by a rope which the camera shows us–honest to goodness–slowly unraveling. Will she descend low enough that when the rope inevitably snaps, she will not fall to her death?

Still, there’s an affable, almost amiable competence surrounding the whole endeavor. Also, Out of the Dark doesn’t quite have the nasty edge that turned me of the more highly praised Wolf at the Door. At an efficient ninety-two minutes, the film doesn’t have time to overstay its welcome. I couldn’t help but wonder, though, if the film evoked so many other, better, horror films for me, would it have the same effect on those who are connoisseurs of the genre? Or would the latter, who are more clearly the target audience, see its tight cleaving to formula as a selling point?