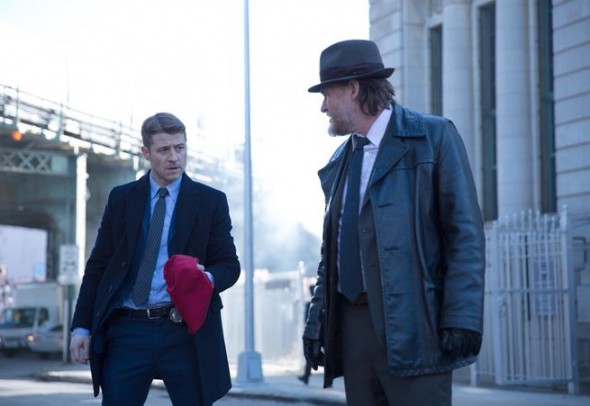 The last two weeks have given viewers of Gotham quite a lot to digest and have given me the answer for the show’s long term future. This week’s “Red Hood” and last week’s “Blind Fortune Teller” have given viewers the most direct references to The Joker in the show’s run so far. The actual content of they episodes has been good, but they lead to other questions. However, before we get to that let’s take look at the hits and misses of this week.

Regarding the show’s future, I really think the best course for them to take is basically what I would have done with the show from the start and that is in the season finale flash forward about 6-10 years and have Bruce on his journey across the world, where we see things he is learning and going through impacted by his younger years in Gotham. We could also see Gordon in a more authoritative role in the GCPD and the different villains at several points in their evolution as opposed to the constant primordial but inevitable state we see them now. I don’t think the show should stay in the future, but rather switch back and forth to contrast what’s happening to where things are actually going.

Most show’s fluctuate the timeline by going backwards, including Arrow, but this approach would bring something a bit different and pay off some off so much of the foreshadowing we get. Most of which, we would never really see pay off as it stands now. Viewers can easily realize that Enigma, Selina, Oswald etc., will be super-villians and Bruce will be Batman so there is not a lot of mystery there. I’ve seen it said, and I agree, that we are seeing a prequel for a show that will never exist. It worked for Smallville because we were still able to see (more or less) fully formed versions of the characters but with Gotham it has been so heavy on foreshadowing and Easter eggs, it feels like one long tease. This solution would give greater depth to the characters and their actions. It could also be a great way to build up hype for the second season as well, including casting of a 18-25 year old Bruce, which would be noteworthy in itself.

What about you? What changes do you think would help firm up the future of Gotham?