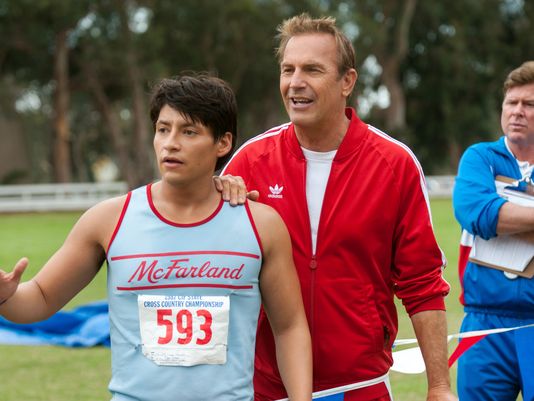 Judging by its trailers, Disney’s McFarland, USA was in danger of plunging fatally into one of two storytelling traps.  First, it appeared to have all the makings of another clichéd sports film about a band of Mighty Duck misfits who enter a hockey/football/tiddlywinks league, defy all odds, and take home the championship trophy.  Second, it had the potential to join that offensive clique of white-man-as-savior movies.  And with Kevin Costner in the lead role, it was indeed possible we were settling in to watch Dances with Mexican-Americans.

Peril #1 will take a little longer to analyze, so let me start with Peril #2.  Thankfully, in McFarland, USA, Costner’s character needs rescue at least as much as his young charges.  When our “based on a true story” movie begins, Jim White has just been fired from his third high school coaching job, thanks to a volatile temper that doesn’t mix well with instructing pampered rich kids.

Rolling into McFarland, California in 1987, it’s evident that White may be down to his last chance to coach and teach.  It’s clear, too, that White’s self-worth is at a personal low.  Demoted from head to assistant coach at his new job, and moving into a dilapidated home in a dodgy-looking community with his wife and two daughters, he feels unworthy as provider, paragon, and protector.  Matters only worsen when White quickly butts heads with the head football coach and is just as rapidly booted from the team.

Potential deliverance comes when White’s younger daughter points out the speediness of some of his PE students.  Inspired to start a cross country team for McFarland High, White now faces the challenge of recruiting these talented runners.

In contrast to the spoiled teens of his last job, White must leap new hurdles to build a team in poor, rural McFarland.  Some of his students are already overstretched, rising before dark to work the fields with their parents.  Others are preoccupied by tumult at home or the allure of gangs.

With these premises, McFarland, USA is perfectly set up to be yet another underdog sports movie.  Truth be told, it lives up to this formula, offering up the usual condescending antagonists on the better funded, more established teams.  We even get the typical fourth act hijinks that threaten to derail all of the students’ hard-won achievements.

However, McFarland, USA is so enjoyable, I didn’t much care if it was formulaic.  As an ensemble and individually, the seven cross country runners are a winsome lot.  None are familiar Hollywood faces, but they won me over with their charm and grit.  Particular standouts are Carlos Pratts as Thomas Valles, the speediest competitor with an unhappy home life; and Ramiro Rodriguez as Danny Diaz, whose steady determination compensates for the extra pounds around his middle.

I suspect for most viewers, Kevin Costner and Maria Bello (as White’s wife Cheryl) will be the only recognizable stars of McFarland, USA.  Bello regrettably has too little to do, her character too passive for my gender equality sensibilities.  But Costner, after a decade-long string of forgettable roles, finally has a character with some meat to him.  Happily, Costner rises to the challenge of playing a decent man, whose desperation and frustration only occasionally peek through a thick coating of stoicism.

Some of McFarland’s dialogue unfortunately crosses the line into didactic, preachy territory.  Most of the time, though, it’s at least serviceable, if not above average.  Once in a while, it becomes touchingly lyrical, most notably when one of the runners writes for an English assignment, “When we run, we own the earth…when we run, we are gods.”  These elevating words can’t help but evoke Eric Liddell’s memorable words from Chariots of Fire:  “When I run, I feel His pleasure.”

The meeting of cultures between the ironically named White family and their Mexican-American neighbors is handled deftly and playfully, providing many good-natured laughs.  Seeing the monolingual signage of their new hometown, younger daughter Jamie understandably asks her parents, “Are we in Mexico?”  Jim and Cheryl, too, need time to adjust to their neighbor’s rooster and the low riders that rumble past their house late at night.

The Whites’ growing respect and embrace of the surrounding Hispanic culture is one of McFarland, USA’s many strong points.  While quite evidently going out of its way to remain inoffensive, this Disney film more importantly manages to be genuinely virtuous.  McFarland, USA touts education and personal achievement as a means out of poverty.  It also elevates giving to and belonging in a community above attaining wealth and status.

Any movie with USA in its title automatically threatens to be jingoistic, appealing to the same demographic that makes mouthbreather Mike Huckabee’s God, Guns, Grits, and Gravy an instant bestseller.  But just as McFarland, USA succeeds in poking its head above the worst sports movie clichés, its embrace of melting pot unity and an estimable work ethic propels it beyond lowest common denominator patriotism.

(Parents’ corner:  Although McFarland, USA is rated PG for “thematic material, some violence and language,” this is safe and enjoyable fare for kids 10 and up.)