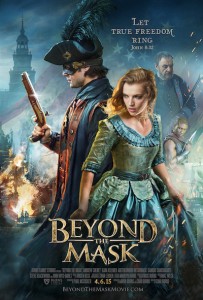 Reviewing Christian films has too often become an exercise in cataloging what a film is not.

Either we are told how the film differs from some secular counterpart–it’s not perverted like 50 Shades of Grey–or we are told how it is constructed to omit some piece of perceived to be offensive content. Analysis and evaluation of a Christian film frequently focuses almost exclusively on what it is lacking: breasts, swear words, a fully-articulated altar call, entertainment value, production quality, budget, widespread distribution…you name it.

I want to say a few words about what Beyond the Mask is and what it does well, so let me get my one big “is not” out of the way. The film is not a game changer. It’s unlikely, in my opinion, to be that elusive crossover hit that so many Christian artists and studios are searching for–the one that will be embraced by the Christian community as their own but still loved (or at least esteemed) by the broader culture in which Christians feel themselves to be a minority. (Incidentally, surely there is an essay to be written wrestling to interpret the fact that while 83% of Americans identify as “Christian,” we still insist on conceptualizing ourselves as a persecuted minority in the so-called culture wars.)

Let me quickly add, though, that its seeming lack of concern with being a cross-over hit is one of Beyond the Mask‘s (★★★) several moderate yet undeniable charms. It’s just a good, fun movie. More often than not, the more a film trumpet’s its Christianness in its marketing (note the scripture reference below the tag line), the more inclined I am to think it is doing so to preempt criticisms about its quality. This way, if “they” don’t like us, at least we have a face-saving explanation.

For that reason, I went into Beyond the Mask with very low expectations. But a funny thing happened on the way to blowing up Philadelphia: while the film’s Christian content was both overt and unabashed, it was actually embedded into a story rather than tacked on to it. William Reynolds (Andrew Cheney) is an eighteenth-century corporate spy/assassin who is double-crossed by his employer, Charles Kemp (John Rhys-Davis). He narrowly escapes death in a modest but well-filmed action sequence in which he has to escape a carriage loaded with a bomb while the driver is trying to shoot him. The story proper is an historical romance. Reynolds travels to the American colonies, masquerades as a highwayman, and uses his special set of skills to try to thwart Kemp’s scheme to nip a potential rebellion in the bud. Success for Reynolds may mean more than helping weirdo inventor Ben Franklin lay the groundwork for a new country; it could also mean earning the love of a good woman. Who doesn’t like a good redemption arc? If the ennobling influences of Charlotte Holloway (Kara Kilmer) are laced with a few more references to God than what we might hear in a similarly situated secular film (where she would just generally call on Will to be a “good” person), the film has enough plot going on that we don’t get restless until the third or fourth time this theme is underlined.

From a production standpoint, while Beyond the Mask isn’t quite at the level of most big-budget, studio pictures, it is another slow step up the quality ladder for Christian productions. Chad Burns’s visual vocabulary is fairly limited, but he composes shots with the fluency of a native “speaker”–only in a late scene where two characters run away from a fireball in slow-motion did the visuals feel hackneyed or cliched. Mostly they were straightforward and in service of the story. Editors are a bit like sports referees, they normally only get mentioned if they make mistakes. But it’s worth spotlighting the editing here as particularly purposeful. (Mike Wech is listed as the Film Editor). Most Christian films feel stretched because they have a tendency to make scenes too long and perhaps lack the budget for multiple takes. Beyond the Mask is an action-adventure story, and a laborious pace would be poison. The set pieces here, while not grand in scale, are nevertheless well executed. The only real place the film belies a limited budget is in the lack of extras in crowd scenes, such as the one in which Reynolds is trying to escape from some soldiers.

Beyond the Mask also benefits greatly from the casting of Rhys-Davis as the villainous Kemp. A veteran of both Spielberg’s Raiders of the Lost Ark franchise and Jackson’s Lord of the Rings series, Rhys-Davis is clearly comfortable in the adventure genre, and perhaps because of those associations, seeing him here never makes us feel as though he is slumming the way we sometimes do when a well-known star ends up in a Christian production for the first time. Cheney doesn’t quite bring the wounded-animal magnetism one associates with Mel Gibson (in his prime), Russell Crowe, or Daniel Craig. He brings more of a Tom Cruisish pretty-boy quality to Will. I kept looking for streaks of nastiness in Will, for signs of the old self he was trying to kick off, and I just didn’t see them. But that may be more of a script issue than a performance critique. Kilmer has the least to work with, script-wise, but she does a nice job of making Charlotte something more than a Bible-spouting trophy prize for the hero without making her so independent as to be anachronistic.

Films set in colonial times do interesting cultural work at the present moment, since the most obvious parallels to our contemporary world blur the delineations between freedom-fighter/terrorist, tyrant/nationalist, and capitalist/oligarch that we are less comfortable examining in a more proximate historical setting. In this, too, Beyond the Mask is a bit more complex than most Christian films, which tend to to present polarized representations of good and evil. Not that we don’t know who the good guys and bad guys are here; we do. But if we listen carefully, the arguments of the bad guy may sound uncomfortably familiar. Kemp rationalizes that violence on foreign soil is necessary to protect corporate and national interests. “How many people do you intend to kill?” Will asks. “How many would die if there was a war,” the villain replies self-righteously.  In a year in which American Sniper has renewed debates about the Christian use of violence and war, it is nice to see a character whose personal redemption entails the recognition of the ways in which the rhetorical justification of violence are so often appropriated by the representatives of power to justify pursuing their self-interest–and who owns his own responsibility as an agent of that violence.

The film opens April 6, 2015, and it looks like it will be using a “theater on demand” distribution platform. Beyond the Mask is good enough that I almost wish it would go the direct-to-video route so that more people could see it sooner, but I get that there is still a prestige and credibility factor to showing at the local multiplex. Whenever and wherever it pops back up on your radar, it’s worth checking out. Most Christian films I see out of a sense of responsibility, because it’s my job. I actually enjoyed this one.