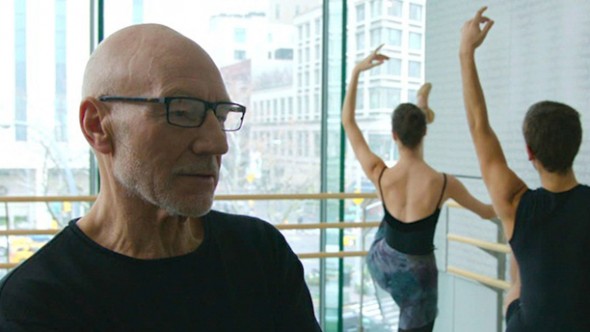 Patrick Stewart is undoubtedly best known as Star Trek’s Jean-Luc Picard, and to a lesser degree, for his roles in X-Men movies and Shakespeare productions.  With such a curriculum vitae, it’s pleasing for a change to see this beloved actor descend from the mythic stratosphere to play a more human and less heroic individual.

As Tobi Powell, a highly esteemed ballet instructor and choreographer, Stewart is more in the vein of Dead Poets’ benevolent Mr. Keating than Whiplash’s terrifying Terence Fletcher.  In the autumn of his career, Tobi prefers quietly knitting at home in his off hours, politely but deftly dodging social invitations from colleagues.

Threatening this dull placidity are Mike and Lisa, a husband and wife coming to NYC from Seattle to interview Tobi.  Ostensibly here to query him for a dissertation on dance, Tobi kindly welcomes them.  First at his favorite coffee shop, then back at his apartment, he regales them with stories of his brushes with the famous and his 1960’s-era wildness.

Only as the questions become more intimate and even menacing, does Tobi begin to suspect that Mike and Lisa aren’t interrogating him for academic reasons.  And were my synopsis to go any deeper, I would be spoiling the turns and surprises of director and writer Stephen Belber’s engrossing tale.

Match is based on Belber’s Broadway play of the same name.  The limited settings, with most of the action occurring in Tobi’s compact apartment, signal Match’s stage origins.  This is not a bad thing, as the forced closeness usefully lends itself to a coziness that alternates between claustrophobic and intimate.

Where the Broadway provenance proves problematic for Match is in the occasional overemoting of the first 30 minutes or so.  Fortunately, the actors’ affects dial down to a more plausible volume for the remainder of the film, with many touchingly authentic moments to follow.

The trio of actors who almost totally occupy the screen do a fine job here.  As I alluded to previously, Patrick Stewart is satisfyingly down to earth in Match.  His Zen-like pronouncements are at odds with his obsessive-compulsive nervousness and need to please, making him just as contradictory and hypocritical as the rest of us.

Carla Gugino and Matthew Lillard aren’t exactly household names, but they share those “that guy” and “that lady” faces that make them recognizable from minor roles in myriad films and TV shows.  As Lisa and Mike, they more than acquit themselves in Match.  Both share a core insecurity and dissatisfaction, which they cover in different ways.  Lisa compensates with her warmth and placating tendencies, while Mike has ossified into irritable rigidity.

Stephen Belber’s script carries Match along effectively, with a tasty mix of pathos, wit, and humor.  Some lines are especially memorable, as when Tobi offers a self-summary:  “I love my life, I regret my life; the lines eventually blur, and it’s just my life.”

Like many other directors before him, Belber employs New York City’s eye-catching staircases, storefronts, and bridges to break up his interior scenes.  Noteworthy, too, is the score by Sander Rosenthal, a light and mellow mix of percussion, guitar, and piano that joins with the story without overwhelming it.

So, while Match likely won’t win any awards or linger indelibly in most people’s memories after ten years, it is a welcome break from the dreck that major studios expel onto movie screens in the early part of each year.  For me, it served up some good material for reflection, in showing us three decent, flawed people and their efforts to cope with life’s inevitable letdowns.

And it’s always a good day when a movie reminds me of the philosophy of Saint-Exupery’s timeless Little Prince.  In speaking of the obligations that arise in relationships, you may recall how the fox told the prince, “You are responsible for what you tame.”  Whether fleeing intimacy (Tobi) or clinging to promises even after the original flame has dimmed to a spark (Mike and Lisa), Match challenges its viewers with a look at taming’s aftermath.

(Parents’ guide:  Match has been rated R by the MPAA, for “language, sexual dialogue, and some drug use.”  I would consider it suitable viewing for older teens.)