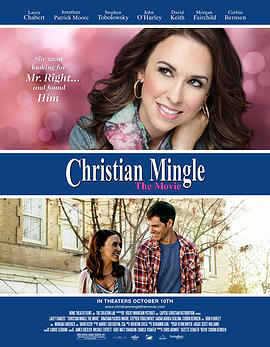 Relative to one of the genres that Christian Mingle (★★) is participating in, it is just fine. As “Christian” movies go, it avoids most of the patronizing self-congratulations that permeated God’s Not Dead and Grace Unplugged. It is competently directed and apparently had enough of a budget to get professional actors in supporting as well as lead roles. Like Heaven is For Real, it bends over backwards to try to accommodate the broadest possible audience. And, really, who doesn’t want to see Lacey Chabert in more movies?

But the film that writer/director Corbin Bernsen name checks in his video introduction is Sleepless in Seattle. My philosophy is that you respect a film most, Christian or otherwise, by approaching it on its own terms. Based on that philosophy, Christian Mingle is first and foremost a Romantic Comedy and only secondarily a Christian film. Or that’s how it wants to be thought of. And as a RomCom, the film has some issues. Some are endemic to that genre, others are particular to the attempts to wed it to a Christian message. It’s not particularly funny–in ways that most Romantic Comedies aren’t funny–and it’s not particularly romantic.

Let’s start with the humor. I like the idea of Christian Mingle a lot. Gwyneth Haden (Chabert), tired of being unable to find a “decent” guy, signs up for the Christian dating site despite not…well…actually being a Christian. The premise has several veins of humor it could mine. The satire could turn on it’s protagonist and the silliness of her thinking. Or, Gwyneth could become an audience surrogate who is introduced to strange world of Christians (and Christian dating), thus letting Christians laugh at themselves and how silly some of our practices must look to those who haven’t been brought up with similar traditions.

The film gestures in both directions, but its jokes are half-hearted, as though Bernsen the writer is a little too afraid of giving offense. Gwyneth meets her decent guy, Paul Wood (Jonathan Patrick Moore), and attempts to pass for Christian by reading Christianity for Dummies and then The Bible for Dummies. She prays a bit too long over her coffee and jumps a bit too quickly to the canned Bible verse she memorized. Meanwhile, Paul and his family go out for dinner at a restaurant called Steak ‘n Cakes (featuring steak and cakes). Paul’s mom (Morgan Fairchild) sniffs that something seems phony about her son’s new girlfriend.

Could it be that she has some verses memorized but doesn’t know where to find the book of James in her Bible? Or that she deflects whenever anyone asks her about her own faith history? Through most of the middle section, I kept thinking about the sharper, more cutting version of this story that could have been–the version where the audience was invited to ponder the implications of how easy it is to pass for a Christian rather than to laugh at how hard Gwyenth tries to do the impossible and how dumb all the Christians are for not noticing. Instead we get standard SitCom formula 101: character gets committed to a Big Lie and audience waits for everyone else in the movie to catch up. (Hmmm, that would have been another interesting variant on the plot…what if Gwyneth never was found out?)

But if this is a Romantic Comedy first, it is still a”Christian” movie, so the truth has to come out, and moral lessons must be learned. The best scenes in Christian Mingle are, quite frankly, the ones that you would least expect since they are the ones that most often disappoint in RomComs. When Gwyneth is found out, we’re expecting a standard “You Lied to Me” speech, which is what is supposed to follow the Revelation of the Secret in The Big Lie plot. Paul actually does a quite good job at this point of explaining why Gwyneth not being Christian actually matters. Hint: it’s not just that she lied to him, it’s also that he wants a prospective mate with whom he can share one of the central parts of his identity.

The scene is so well written, in fact, that it makes the film’s ultimate denouement all the more frustrating. For a brief while it looks like the film will be truly subversive to the RomCom genre as Gwyneth starts to investigate in earnest the life she was previously simply trying to emulate. It’s at this point that the film’s Christian identity is somewhat at odds with the conventions of the Romance genre. It ought to be sufficient for Christian audiences–and for Gwyneth–that good comes from the deception in the form of Gwyneth starting to know God. Heck, a mature movie might even have Gwyneth come to understand why she is not right for Paul and see that true love is choosing what is best for the other person.

Instead the film wants to have its steak and eat its cake too. Gwyneth’s budding spirituality leads her to challenge Paul to live his own life and accept risks. It doesn’t help at this point that Paul’s character is seriously underdeveloped. We would probably be more amenable to a Romantic happy ending if the film were a little more willing to play Christians in a bad light in the first half so that Gwyneth’s eventual critique of Paul’s timidity has something other than her (self-interested) insight to back it up. (An early scene where the couple goes out for sushi actually contradicts Gwyneth’s later assessment that Paul is unwilling to go off the life script provided by his parents; he seems open to new experiences and willing to try new things.)

There’s also really not that much chemistry between Gwyneth and Paul, so we are dependent on too much verbal exposition. The characters tell each other (and us) how much they reeeeeeallllly like each other so often that I started to wonder if they were trying to convince us or themselves.

Well the success of most Christian movies is largely dependent on the cast’s ability to make a little go a long way. Chabert has a pretty big reservoir of good will to draw from (Party of Five, Mean Girls) and she somehow manages to make Gwyneth sympathetic without being whiny. John O’Hurley is fun in a mugging cameo as an advertising client trying to sell hair growth pills. (The work scenes as a whole are better than in most Christian and even some Hollywood comedies, but they are still a tad overwritten.) Bernsen himself plays a guy that fixes Gwyneth’s bike and talks about his dead wife without proselytizing. (Speaking of alternate versions of the movie, I sort of longed for one in which we never saw Paul and the romance was a back story dribbled out through conversations between the woman and her bike mechanic.)

One last thought. The success of romantic comedies is largely dependent on how much we want to see the couple united. I’m assuming Christians, especially Christian women, will be the target audience. Given the alleged paucity of decent men, will the audience want to see Paul and Gwyneth end up together? Won’t most of the audience relate not to Gwyneth but Paul’s longtime friend (and long time fellow Christian) Jen-Jen (Erin Bethea)? The conventional way most RomComs guarantee you root for the couple is by making the alternative prospects jerks. Christian Mingle doesn’t do that to Jennifer, and I appreciated that. But neither does it really come up with a a convincing reason why Gwyneth is a better choice for Paul. If we take him at his word during the break up scene–if we really believe him in what he says he wants in a partner–it’s hard to see how the end of the film doesn’t make him look every bit the poser that Gwyneth once was.