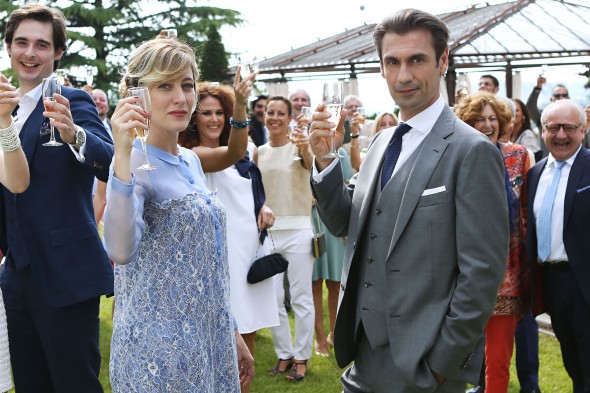 Human Capital (“Il capitale umano”) (★★½) is a cross between Crash and Edith Wharton’s The House of Mirth, with a touch of Pulp Fiction‘s overlapping, episodic structure thrown in to make its plot look more complex than it actually is.

It is one of those films that solemnly explains its title with a voice-over postscript and type on an empty, black screen. (In case you are wondering–and don’t have access to Google, a dictionary, or Wikipedia–“human capital” is the term used to designate the financial value of a human life.)

The film deftly plays on the post-2008 global recession to rehearse an ages-old lament that people are reduced, especially by mammon and those who worship it, to numbers on a bank ledger. Capitalism is stacked in favor of the rich. They have the inside information and tribal connections that allow them to exploit systems for their benefit, distributing huge losses across the national and international proletariat while accumulating obscene amounts of ever-increasing wealth.

I don’t really have a problem with the film’s ideology, but civics lessons don’t usually make for good stories. Human Capital plays a bit like a narrative version of a Michael Moore film. There is plenty of righteous indignation but not much in the way of insight into human nature–or, when you get down to it, empathy for human suffering. (I would point out, for example, that the film has as little interest in its central victim–the bicyclist run off the road–as it accuses its idle rich characters of having.) One could argue, I suppose, that this is exactly the point. Capitalism makes the middle-class envious, and that envy warps them into miniature models of the very people they say they despise. That may be true, but cynicism is rarely enough to propel a feature-length film.

The film’s plot weaves together the story’s of two families, the Ossolas and the Bernaschis. Dino Ossola is a small-fry real-estate agent who borrows to the hilt when his daughter’s boyfriend’s father lets him buy into his group’s investment cartel. Dino either doesn’t know or doesn’t care that Massimiliano’s investment group has bet the market on a nationwide recession, meaning that they only get rich if the country as a whole suffers. Ironically, when the vaguely referenced “markets” do not go down right away, the group loses money. Massimiliano and his uber-wealthy cronies have enough of a cushion to wait for market corrections but Dino fears he and his family will be ruined.

In the meantime, police are conducting an investigation into a traffic accident that led to a bicyclist being run off the road by a careless motorist. Was the jeep being driven by the Bernaschi’s pampered and weaselly drunken sot of a son or by the Ossola’s enabling daughter (who has allegedly broken up with the Bernaschi boy but appears to be hiding something)? Will it matter? Human Capital is permeated with a sense of fatalism that whomever is to blame for the accident, the rich will escape consequences and the rest of the world will be left to clean up their messes.

Actually, it is not entirely clear whether the film believes this or whether the middle class characters, like Dino, believe it. Because the film itself portrays the middle class as being just as narcissistic, venal, and extrinsically motivated as the the rich. And just as willing to leverage human relationships to secure financial gain.

That might work better if there were either a character that the audience could identify with and root for or if the film were a little more angry instead of mopey. Carla, Massimiliano’s wife, is probably supposed to fit that bill, but much like Carmella Soprano, her moral awareness is compromised by the silken cords binding her to a luxurious life style. Dino’s daughter, Serena, gets her own story arc, but anger from the young too often comes across as petulance. The decisions she makes too often come across as concessions to the needs of the plot rather reactions to her own moral compass.

Human Capital was wildly successful on the festival circuit in 2014, and it was submitted by Italy as its candidate for Best Foreign Film. It gets a limited theatrical domestic run beginning this week. FilmMovement subscribers will get an early look at the film on DVD in May,  2015.