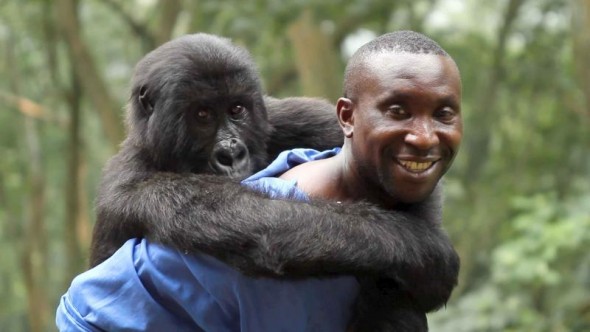 How much do we have in common with our fellow primates, the endangered mountain gorillas of Congo?  What role should more industrialized nations take in the development and use of resources in post-colonial Africa?  More personally, what causes are worth our lives’ devotion?  These questions are powerfully considered in Orlando von Einsiedel’s documentary, Virunga.

Von Einsiedel starts his film by effectively grounding viewers in the conflicts that form the core of Virunga.  The film opens with the funeral of a murdered ranger, one of over 100 who has been killed defending Virunga National Park.  With only the ambient soundtrack, we hear the crying mourners, hymns sung, and the invocation offered by the presiding minister.

From there, the director moves to a brisk montage furnishing a brief history lesson of Congo.  For over a century, this large African nation has been exploited by Western corporations for its natural resources, as Western governments have intermittently stoked civil unrest.  The end result?  Millions of dead Congolese, with the survivors living in the strewn wreckage of economic adventurism.

This cycle threatens to renew itself in Virunga National Park, following the discovery of oil in its confines in 2010.  Home to the world’s last 800 mountain gorillas, this park was already threatened by poachers.  Now its rangers face hostility from a British oil company, SOCO.  Leaving no stone unturned, SOCO officials cozy up to anyone who might further their interests, working with the Congolese government and military, bribing park officials, and subsidizing local M23 rebels.

Director von Einsiedel intelligently chooses to tell his story primarily from the points of view of four protagonists.  Two of these individuals are Congolese:  Rodrigue Katembo, a head warden; and Andre Bauma, a gorilla orphanage caretaker.  Two are European:  Emmanuel de Merode, the park’s director; and Melanie Gouby, a freelance journalist.

Thankfully, Virunga doesn’t follow the stale, offensive “white saviors in a black world” film formula.  We actually learn much more about our two Congolese heroes, their families, and the trauma they’ve suffered during their nation’s turbulence.  Indeed, it was only in researching for this review that I discovered Emmanuel de Merode is a Belgian prince (Virunga only glancingly alludes to possible royal status) with a Ph.D. in anthropology.

Von Einsiedel also knows how to mix things up and pace a good story.  Interspersed among scenes of the gorillas and our four leads doing their jobs, we’re offered grainy video of SOCO businessmen and hired thugs, footage surreptitiously obtained by Gouby and Katembo.  Many of the outrageous comments uttered by SOCO functionaries wouldn’t have been out of place emerging from the mouths of villains in Michael Clayton or even a bad 1980’s action flick.  Appallingly, one such chap speaks of the need to “recolonize” Congo, because its citizens are so childlike in their ineptitude.

As importantly, Virunga’s director discerns when to tap the brakes, with frequent visual pauses to the action by way of gorgeous park vistas or splendid wildlife tableaux.  Nonetheless, Virunga builds to a tense showdown involving rangers, the gorillas, SOCO, government troops, and M23 rebel forces.  So engrossing were the final 45 minutes, I was white-knuckling it for much of the climax.

Beyond a captivating story, Virunga provides abundant food for thought.  Firstly, this documentary challenges us to reflect upon Homo sapiens’ commonality with our fellow primates.  During the course of Virunga, we witness mountain gorillas demonstrate affection, display appropriate fear, smilingly engage in play, and quite likely, grieve.

Just as Shakespeare’s Shylock underscored the shared experience of Jew and Christian, Virunga contains plenty of “prick us, do we not bleed” moments for human and non-human primates.  To their immense credit, many Congolese recognize these unifying traits.  During Virunga, we are privileged to witness a funeral procession for gorillas massacred by poachers, and I was deeply touched to hear Andre Bauma (the orphanage caretaker) expound on his maternal role for his gorilla family.

Secondly, Virunga challenges us with its contrasting presentations of virtue and venality in vocation.  To what ends will we boldly extend ourselves?  Exploitative commerce in pursuit of exhaustible resources?  Or courageous protection of our planet’s more enduring gifts, leaving the world a better place for our children?  To phrase the dichotomy another way, when we first meet Melanie Gouby, she relates that she got into journalism because she didn’t want to live in the rut of “subway, work, sleep.”

During the ranger’s funeral that commences Virunga, the preacher prays, “Help us to account for each day of our lives.”  Whether you’re religious or not, let it be so.

(Parents’ corner:  Virunga is unrated.  It has a bit of rough language and shows some violence involving both humans and animals.  As such, I would encourage viewing by folks 13 and older.)