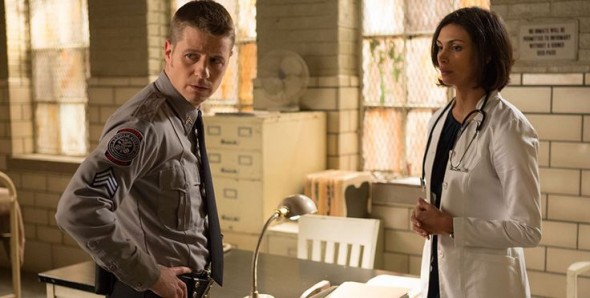 In the word’s of my favorite character of Jimmy Fallon from his SNL Days, “And we’re baaaaaack!”

Mid-Season hiatuses can always be a tricky thing. Sometimes they leave viewers anticipating a show’s return and other times they leave too much room for the show to be forgotten about. I’m not quite sure which (if either) of these was the case, but I for one am glad to return to Gotham City to see how things play out the rest of the season.

This week saw Gordon at his new assignment at the (in)famous Arkham Asylum, as well as Fish Mooney and her right-hand man Butch further working to take out Falcone. We also saw Barbara’s relationship(?) with Montoya play out further from the mid-season finale. What stood out for the better and worse?

Barbara – I’ve discovered that Barbara has become a character many others than just me have grown to not enjoy and I’m not sure this episode did her any favors. She is a mess who is now ruining two other people’s lives with her behavior. Also, she cannot tell the difference between Ivy’s voice ( a child) and that of a grown woman.

The essential problem with Barbara is that I don’t see how her arch really plays into the larger scope in Gotham City’s future, at least not to the degree that her character is given this much time per episode. There is a reason Nikki and Paolo were killed off Lost shortly after they debuted, and part of me thinks Barbara isn’t long for this world either. When you combine her drug-habit, her connection to Law-Enforcement who are entangled fighting the mob, and a name that screams out “Gordon will name his future daughter this as a tribute” it all kind of comes together.

Butch – Do not get me wrong. I like getting some character development form a character we’ve seen so much of so far this season, but this episode demonstrated something I think is hurting the show. It is one thing to have many characters who each have their past and motivations presented to the audience. However, Gotham rarely focuses episodes in a way that doesn’t leave the viewer feeling almost claustrophobic.

Ivy – Far be it for me to criticize a young person, but the casting of Ivy, and the performances so far have been, underwhelming. I don’t know what else to say other than her scenes need to be carried by someone else, like Selina, or they will feel weird, like it did with her on the telephone.

(THE) Penguin – This goes to my last point more than anything. I think a small plot-line of Oswald being taught a lesson in hubris is fine, but again, in this episode it just felt cramped. I’m sure that this whole sequence was probably more of Oswald’s machinations more than him legitimately wanting to get a few extra bucks from fishermen and so maybe this was the episode to have it in. That doesn’t mean the larger problem doesn’t exist though.

Oh, you’re being introduced this episode without fanfare beforehand? You’re probably going to die or be this week’s villain – Ok, that was a long subhead but you get my drift. I understand procedurals. Every episode there will be a handful of characters introduced who exist only for that episode and will either be killed, witnesses, or the perpetrator never to be seen or heard from again. I even understand this to be true in comics as well. This doesn’t mean it should always be obvious who will be which one of those things so soon into the episode. Gotham needs something to help it stand out aside from it being part of the larger Batman Universe. Finding a way to subvert the usual procedural would go a long way.

Dr.Leslie Thompkins – Bat-fans will recognize this character as a long-time stalwart and ally to Bruce. She is a character whose timeline actually works with the show and it will be interesting to see her and Gordon get to know each other. I thought Morena Baccarin was good in her initial episode and I think she will be more of a level-headed person for Gordon to trust. That, or her time on the show will help viewers see her path to become the kind of person Bruce eventually leans on for support.

A Bad Guy Who Lasts More Than One Week – I thought it was a nice development that the Villian of The Week turned out to not be that at all. Instead of the mysterious electric-shock therapist at Arkham being caught, he has escaped and looks to continue his work next week. I think mini-arcs can be used really well and I hope Gotham picks it spots to do this to keep viewers on their toes.

Gordon won’t be stuck at Arkham For Long – With the director of Arkham biting it this week, and next week’s preview seeing Jim continuing to work with the GCPD, I can’t imagine he will stay at Arkham as a guard much longer. I don’t anticipate them eschewing Arkham as a location they visit often, but I think Gordon and Bullock working cases together is part of this show’s bread and butter and from everything we saw it will go back that way soon enough.

No Bruce – This is less about Bruce and Alfred not being in this episode and more about the show showing some restraint and not shoehorning the future Dark Knight in this episode and cramming it even more full. The funny thing is, I’d much rather substitute Bruce and Alfred in this episode for Oswald. When Oswald’s off-screen the viewer can only wonder what he is doing and the next time he makes an appearance there’s a world of possibilities of what manipulation he’s been up to, but you don’t want to miss Bruce developing too much.

Overall, this was not the best episode, next week look’s to be better. However, I’m glad the show is back and look forward to it picking up momentum for its second half.

What did you think? Let me know and come back next week as I lay out a major way Gotham can improve as it finishes its first season and moves into its second.