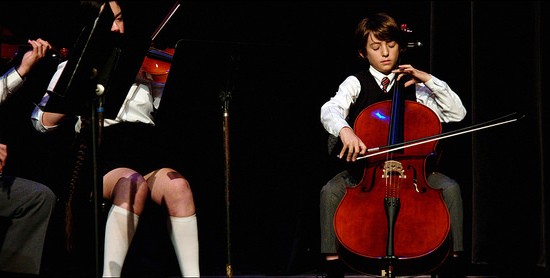 To call twelve year old genius Reggie (Julia Shatkin) precocious would be an understatement. After the camera slowly circles his immaculately kept room, it rests on him sleeping in his king-sized bed. The family maid enters, and as he sits up, she helps him into his bathrobe. We next see him sitting in a large ornate bathtub, arms resting on the sides, head tilted back, and eyes closed. At breakfast he meticulously grills the maid to make sure she is not slipping any meat or gluten into his strict vegetarian, gluten-free diet. After walking to school against his mother’s strong wishes that her chauffeur drive him, he sits bored in his calculus class of students several years older than he, and when the teacher calls on him he answers correctly without hesitation and pedantically lectures his teacher on Euler.

Sleeping in a ragged tee-shirt and sweatpants, Eleanor (Leighton Meester) wakes up at ten-thirty on a mattress without a bed frame in her boyfriend’s apartment, a boyfriend with whom she will break up momentarily after she throws his electric guitar out the second story window. When he retaliates by making a scene at the diner where she works, she loses her job. By fortunate coincidence Reggie’s mother needs a new nanny to look after Reggie, because the former nanny had to return to Panama, and Reggie’s mother is going to China for several months to see her husband (Reggie’s stepfather). Exaggerating her credentials slightly, Eleanor gets the job, thus beginning one of the most unusual relationships between a child and guardian.

However, Eleanor and Reggie have more in common than would be expected. Both are principled, as shown by Reggie’s commitment to maintaining his health and using his wealth to help others and by Eleanor’s concern for her sister as her sister takes job in seedy places of employment. Both have strained relationships with their mothers, and both are talented, amateur musicians.

The best aspect of Like Sunday, Like Rain (★★) is that the remainder of the film does almost nothing that I expected. What looks like a setup for a Freudian twist is thankfully misleading. Other than one awkward, explosive encounter that comes out of left field, the story is a mostly believable, quiet portrayal of a friendship between two lonely individuals who come to care deeply about one another. The worst and most prevalent aspect of Like Sunday, Like Rain is that beyond the premise and setup none of the execution is particularly remarkable or memorable other than the final scene. I have never felt so confident that I will forget most of a film in two weeks. Still, there is nothing bad or unpleasant about it, and the slow, smooth camera movements make for easy viewing.

The two lead actors are both convincing in their roles. Shatkin manages to keep his nonchalant utterances mildly amusing with lines like: “No one cares where I am. The operation continues whether I am at camp or at home reading.” “Life is a series of colossal mistakes.” “Grapes of Wrath. There’s a happy story for you.” Meester balances him well and wins the viewer’s sympathy as a young woman dealing with a stalker ex-boyfriend, unemployment, unsupportive parents, and a child who calmly and logically explains why she should let him defy his mother’s wishes. The unusual chemistry between them is passable, if again, not very remarkable.

Not much more needs to be said. A few conflicts are developed too much for the film to forget about them. Using Reggie’s composition as underscoring was an effective choice. I could list several more observations like that, but while Like Sunday, Like Rain has a few nice moments, I found it too bland to be particularly engaging.

Like Sunday, Like Rain will hit arrive in theaters on March 6, 2015 from Monterey Media. DVD and streaming options will be available on April 21.