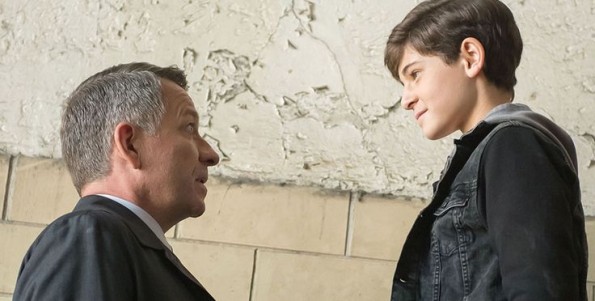 Gotham‘s 10th episode, “Lovecraft” marked it’s halfway point of the inaugural season and demonstrates how far the show has come in 10 weeks.

This episode was a solid “chase” theme with Bruce and Selina having to outrun some would-be assassin’s with Alfred, Gordon and even Bullock on the trail to save them. We also got to the the mob war continue and drove us closer to poor Liza seeing her world cave in.

Has the show really explained why Bruce talks the way he does? Sometimes he speaks more like a young Sheldon Cooper than he does a young Batman. Was he like this before his parents were murdered? Bullock and Gordon’s dialogue suffers from some of the same awkwardness that Bruce’s does and there are times when this really comes off as a blight during otherwise enjoyable episodes.

Normally, I enjoy just about any scene involving Oswald, but this week I think his scenes stood out as the most extraneous. I understand why they wanted to include them, but I think they weren’t necessary. The audience came into the episode knowing Oswald is in a precarious position and has to play out his plan of using his knowledge of Liza’s allegiance, and they came away from the episode with the same thing.

I know it serves to move the plot, but the reasoning of Gordon being sent to Arkham was pretty spotty, even within the internal logic of Gotham’s world. This does open up an entire realm of possibilities. and if you’ve read about the rest of the season can probably guess how a certain character will be introduced through Gordon’s time at Arkham, but still…I would’ve preferred it maybe if the motivation was Gordon going to Arkham undercover or something to that effect.

Harvey Dent’s only be in in two episodes now, and we already see him as kind of snotty, and not very good at his job. The entire tragedy of Harvey turning into Two-Face has always been that Harvey was a great servant of justice as DA and that he was generally a great person. My hope is that Gotham does not turn him away from that in favor of making him part of the larger problem the city itself has with corruption.

Bruce, Alfred and Selina. The show has danced around really focusing on the Bruce/Alfred dynamic for extended sections of time and has used Selina more sparingly than some of the other characters. “LoveCraft” and last week’s episode were nice touches as we got something of a break from the Mob-related arcs and got a chance to see Bruce and Selina getting to know one another and Alfred’s growing relationship with Bruce. The latter is an obvious element for Gotham to focus on, which they have done well, but the interaction between the future Bat and Cat has really made the last two episodes shine. It creates so much more depth because we know where these two end up in the future, and it makes these scenes feel that much more important.

Sean Pertwee is absolutely dialed in and nailing it as Alfred. Michael Caine will always be thought of fondly as Alfred, but for the most part he was being Michael Caine (which is admittedly very entertaining). Pertwee, however, is bringing an edge to Alfred that many have always enjoyed as well as a warmth that brings “all the feels” to fans who want Bruce to have something to fight for as well as a model for Bruce to learn about taking care of others as he eventually becomes apt to do.

“She’s scary.” While the acting performance between the two was a bit odd, the dynamic between Selina and Ivy was really interesting and establishing Ivy as odd and frightening early on separates her from Bruce and Selina and hopefully positions the character for some interesting things as the series progresses.

That brings us to look at the series as a whole as we enter its midway point. I have seen so many different viewpoints of the show that I’ve come to realize the people who want to give it a chance and like it will do so more often than not and the people who look first with a cynical eye will probably never really like it. I think Fox could have gone some other directions and probably found an audience that was more fully into the show (the Kevin Smith/Paul Dini idea is hard to get out of my head) but what they’ve chosen is still really solid and has plenty of potential. Here are a few notes I’ve come to be fairly sure of regarding the show so far and its future:

I’ve been optimistic about this show since the beginning, which I admit to be my own bias, but at the mid-season mark that hasn’t really changed. This is an entertaining and dare I say “pretty good” show even with its faults. My grade so far, a solid B, which let’s be honest is a pretty fitting letter for Gotham after all.

What about you? How would you grade the show at the half-way point?