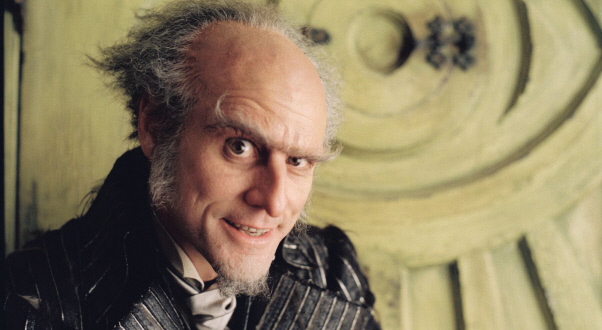 Lemony Snicket’s A Series of Unfortunate Events were books that my sisters and I all enjoyed reading as they were first published a little over a decade ago. I enjoyed them for the macabre humor, tragic story arcs, Lemony Snicket’s pedantic interruptions of the story, the alliterative titles, and the endearing protagonists. I imagine my sisters primarily enjoyed them for the empathetic, resourceful Baudelaire children who always managed to succeed despite the miserable cards that life deals them — an expression which does not mean the Baudelaire children were actually playing cards, but rather means they encountered many unexpected and unpleasant surprises in their adventures. Regardless, we all were interested in seeing this film adaptation ten years ago.

I wasn’t reviewing films back in 2004, and I had just started to develop an interest in film, by which I mean I focused on renting golden age Hollywood classics from my local library while mostly ignoring newer releases. At the time I barely saw ten new films from 2004, but this was one of them. Being an eighth grader roughly halfway through the series, I enjoyed the movie quite a bit. I thought the relatively faithful merging of the first three books was clever, including the use of the ending of the first book as the finale for the movie, and I distinctly recall wishing there would be sequels.

The first thing that really stood out to me is how well the kids work together. Emily Browning (14-year old Violet), Liam Aiken (12-year old Klaus), and the Hoffman twins (taking turns as 1-year old Sunny) form a compelling and sympathetic trio of siblings. I don’t believe that any of their characters would be nearly as interesting on their own, and I very much enjoyed watching Violet as she takes charge of dangerous situations and uses her inventor’s brain, Klaus as he recalls his knowledge from books to help his sisters, and Sunny as she squeals her baby talk and bites things. The subtitles for Sunny’s baby talk would have been amusing on their own, but having her older siblings understand her makes the exchanges more humorous and more touching.

A large part of one’s like or dislike for this film will come down to how much one appreciates, enjoys, or tolerates Jim Carrey’s scenery chewing as the villainous Count Olaf which he ratchets up to an eleven – an expression made famous in the 1984 movie This Is Spinal Tap, which means someone does something to an extreme degree. For the most part, it works for the story which has its own share of extraordinary incidents, and Carrey’s Olaf is right at home among an incredibly deadly viper, three-eyed toads, Lachrymose Leeches with six sharp teeth, houses built on a cliff supported only by thin wooden beams, and giant eyes that starts fires. The character from the books is equally flamboyant, and Carrey’s interpretation of the terrible actor is completely consistent with lines like, “Roast beef. It’s the Swedish term for beef that has been roasted.” His disguises as he pursues the Baudelaires are no less outrageous, and he digs into those with equal relish.

Among the rest of the cast, Meryl Streep stands out as the paranoid, grammar loving Aunt Josephine, whose irrational fears include hot surfaces, shattering door knobs, the refrigerator falling, and realtors. Billy Connolly’s herpetologist Uncle Monty is a stark contrast to Carrey’s menacing Olaf, but his extended cameo is quickly ended, as it should be in a movie titled A Series of Unfortunate Events. Timothy Spall is a little bland as the monotone, moronic banker Mr. Poe. He captures the stoic stupidity of the character, but a little too much of the character’s personality bleeds into the performance. Jude Law’s passiveness as the narrator Lemony Snicket sounds more like an unwilling student reading his paper to a class than an author sadly and resignedly doing his duty, but Law still conveys the dark humor.

There are other small flaws as well. An early piece of narration contradicts a very late plot development. Carrey’s makeup is not always consistent; he scribbled the names of the children on his palm for his first scene, but some shots reveal his palm without makeup. One deviation from the books gives the film a little too much closure; there should be a greater sense of unease and non-resolution. Law could have done a slightly better job with his voiceovers, but the frequent voiceovers are still successful at capturing the self-aware pedantic humor and Snicket’s repeated insistence that you do not want to read or watch his tale. Apparently, I still appreciate that type of humor even when its execution isn’t quite as sharp as it could be.

I still think that this is a fairly good movie, definitely not as good as I thought at thirteen or fourteen, but as someone who appreciates the style of Daniel Handler’s (Lemony Snicket) storytelling, I find this film is a faithful and decent adaptation of the unfortunate events that plague the Baudelaire children. If the upcoming Netflix series fails to do justice to the books, it will be sadly missed opportunity, but we’ll still have this film which is a worthwhile version of a children’s story about encountering tragedy which elucidates the nature of evil. (Elucidate is a big word meaning “to make clear.”) If I ever have kids, I will gladly watch this again with them — after they read the books, of course.