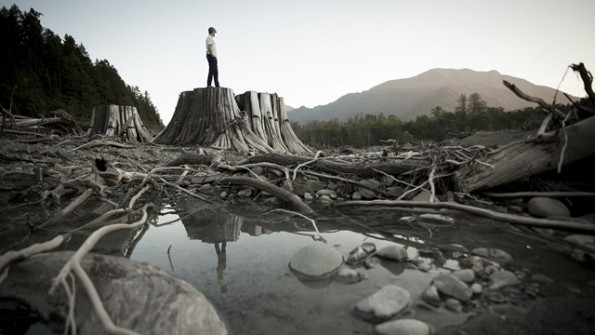 Did you know there are over 75,000 dams over three feet high in the United States? I didn’t, until I screened DamNation, an educational and provocative documentary about the history of dams and their environmental impact.

At first the film looks like it might turn into a standard taking sides/issue film, with proponents of dams touting the wonders of hydroelectric power and critics lamenting their effect on wildlife. Gradually, however, the film follows (and advocates) the rising movement to remove obsolete or inefficient dams. It makes a strong case that doing so is a public good, preserving the renewal of wildlife while having a minimal impact on energy creation. The film argues that energy created by the Condit Dam could be replaced by as little as three windmills.

Issue documentaries often forget that film is a visual medium, but this one doesn’t. Ben Knight’s photography is stunning. He told the audience his background is in still photography, and he tried to approach each shot of the film as though it were a still photo. Nature shots are to photography what sonnets are to poetry—so ubiquitous it takes an extremely skilled craftsman to breathe new life into a tired form.

Also, most environmental films are downers, infected by the apocalyptic despair of An Inconvenient Truth or Surviving Progress. But DamNation chronicles some successes in removing dams, shows the remarkable resiliency of salmon species, and evidences the miraculous (I use the term deliberately) ability of nature to be renewed if given “half a chance.”

This review was originally published as part of my coverage of the 2014 SXSW Film Festival at Christianity Today Movies and TV. Reprinted with permission. All rights reserved.