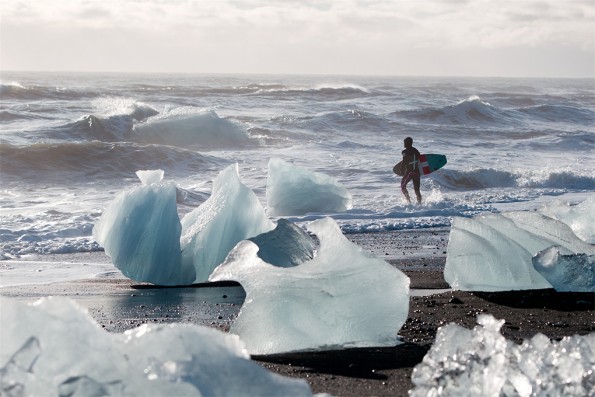 The surfing movie has been a staple film genre since the late 1950s when swarms of kids invaded the California coastline, surfboards in tow. Hollywood went crazy, with films such as Gidget and Surf Crazy documenting this enthusiasm. By the late 1980s, the genre had died down, and currently there are few big name surfing movies. Not ones that end up in the theaters, anyway. So the independent film Strange Rumblings in Shangri-La is a welcome treat.

The film, shot on 16mm, has a coloring that surpasses anything I have had the pleasure of watching in the last several months. In addition to the storytelling or the framing, the pure, saturated colors were a treat for the eye. The contrast between land and water, with the lone figure of the surfer, combine to make an excellent dynamic. The colors are pure and undiluted, making the film  a visual masterpiece. Every drop of water can be observed. Even besides the water visuals, the other scenes were a treat: scenes of village life, children running ahead of the vans, the surfers walking through rocky terrain to reach the ocean. They all popped and seemed to glow, even more so than in the most realistic films. These colors were so bright they almost seemed impossible or fictitious.

The film follows a group of surfers and the people they find throughout their journey; on their expedition to find paradise, the titled Shangri-La. The group travels by boat, plane, and cart pulled by elephant, through villages the world over, searching through the world’s most beautiful and picturesque surfing locations. The film has no real conflict and there is essentially no plot; it seems to merely float along as effortlessly as the waves on which it focuses. The plot in a sense is to provide the viewer with interesting cinematography and locals, not to draw attention to a problem or provide any kind of solution to this problem.

As a whole, the film stands on its own well, but one wonders how engaging it would be if it lasted any longer than its 51 minute runtime. There is only so long that the average person, not a surfer, not someone with technical expertise on this subject, will be interested in watching repetitive surfing shots. The real draw for a non-surfer lies in the human shots, in the bits of humor that punctuate the film, in the shots of the villages with children running and playing in front of the wagon. For a person unfamiliar with the surfing documentary, this may have just enough human interest to keep them watching, especially with such a short run time.

The film director, Joe Guglielmino, credits Bruce Brown and Jacques Cousteau for influencing the film, saying he attempted to create a work in the spirit of both of these classic surf directors. Brown was cited as one of the first pioneers of the surf film genre, and Cousteau carries with him a legacy of both naval exploration and aquatic photography. Cousteau, a French naval officer turned ocean explorer is often credited as one of the first true aquatic pioneers, interested in underwater research for its own sake, aside from tactical maneuvers.

Likewise, the film seems to take a pure joy in its subject matter. It is clearly a labor of love for the creators, documenting their journey. The film is divided into segments, with each introduced by a narrator providing a brief commentary. Besides that, however, the film’s dialogue has a minimalist feel, with only the essential information being provided. Everything else is left up to the interpretation of the viewer. In this sense, it feels like the creators have chosen this viewpoint so that the dialogue or voiceover will not distract from the cinematography. The focus is not on the interactions between the people in the film; they are only props to get from destination to destination, not well explored characters of their own.

Strange Rumblings in Shangri-La was enjoyable to watch. Perhaps more time could have been spent on the motivations and goals of the main protagonists and the narrator, thus humanizing what are essentially props leading the viewer from location to location. But otherwise it was visually stunning, and I anticipate more well produced works in this genre from these creators.

Rachel Davis is a student and freelance journalist.