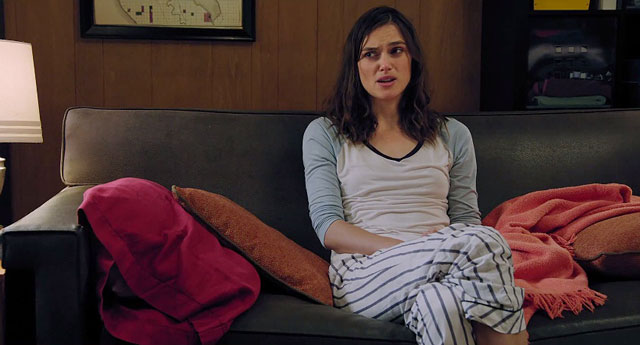 Much like its protagonist, Megan (Keira Knightley), Laggies (★★★½) flirts with a couple of bad ideas before somehow landing on its feet.

When the film opens, Megan is working, sort of, as a roadside street-sign twirler for her father’s office. Her friends are getting married, advancing in their jobs, beginning to forge and shape their lives. For just a second, the film looks like it is going to be another disaffected Millenials Jeremiad, like Girls or Fort Tilden. Fortunately, though, Megan is not yet totally self-indulgent about her not-quite-midlife crisis. When her friends rag on her for taking such a menial job–and for refusing to cut away from it early to accommodate their schedule–she bristles. Self respect comes not from what she does to make money but in her refusal to pander to the self-pity that threatens to turn so many of the heroines in such comedies into whining narcissists.

When her boyfriend proposes to her on the dance floor of a friend’s wedding, she is aghast at his tactlessness. Megan might roll her eyes at the pretentiousness of the ceremony–the bride and groom have a choreographed dance routine–but she recognizes at heart that it is their day and she doesn’t want to grab the spotlight. Then she catches her father in a compromising position and some inner crisis comes to a head. It’s one thing to believe that all your generational peers are ninnies. It’s quite another to have no role models and nothing to aspire to.

Megan senses she will accept the proposal and drift into marriage She finds it easier to go along than to risk articulating, even to herself, what she really wants. One can empathize with the malaise of the twenty-somethings when it is not so melodramatically self-indulgent. Megan and her generation have inherited a world where options seem more limited. They have grown up being told to downplay their expectations about what they might receive not just from the previous generation, but from life in general.

So when Megan pretends to be going out of town to a conference in order to get some alone time, the film could go any number of ways. Annika (Moretz) approaches her at a grocery store and asks her to buy beer for her and her friends. Here the writing really picks up; Annika becomes both a nostalgic mirror that Megan is tempted by and a surrogate sister that allows her to realize that she has grown and progressed since high school. The middle scenes are the film’s strongest because they aren’t about plot. When Megan asks to crash at Annika’s home for a week in exchange for impersonating her mother at a school meeting, we see well enough where things are going. Annika’s divorced dad, Craig (Sam Rockwell, who like Knightley just keeps giving one good performance after another) discovers the stowaway in his home but agrees to let her stay, sensing that Megan’s presence is a positive influence on his daughter.

He’s right, of course. And that’s why the film transcends its conventional set up. Megan and Craig are a bit more rounded, a bit more three dimensional than we are used to seeing in the comedy genre. Andrea Seigel’s script invests them both with enough intelligence to realize what is going on so that the script doesn’t become one long trek towards a secret lie being revealed.

The film’s last act is perhaps the most clunky as it calls on Megan to suddenly regress in both intelligence and common sense. The problem here is not just that we see she should break off her engagement long before she does; it’s that we don’t really believe that she doesn’t see that as well. She only really clings to the engagement to help make the movie a little longer than it needs to be.

Still, even with the last act problems, the interactions between the characters are so fresh, so easy, that the film is at its most pleasurable to watch when nothing much is happening. It’s not just the scenes between Megan and Craig, either. Miss Representation said that roughly ten percent of contemporary screenplays are written by women. That the interactions between the female characters feel a degree more honest–and hence interesting–than anything we are likely to see in a typical rom-com offering says a lot about Andrea Seigel’s screenplay. (IMDB says it is her first credit.) A scene in which Annika asks Megan to accompany her to visit Annika’s estranged mother is just a gem. Mom (Gretchen Mol) gives Megan one glimpse into one possible future, but the film takes the time to flesh out her character rather than have her be there simply as a foil for Megan. The brief discussion about the difference between “cool” moms and “bad” moms hints at the wider tableau of social pressures and mixed messages that young women get about growing up. I also tend to love films that don’t demonize the supporting characters as a shorthand to make the protagonists look better. Mom has faults. So does Megan. So does Annika. But the film is less interested in ranking these women as it is in allowing them to grow and deal.

Fresh on the heels of Begin Again, Knightley’s turn here solidifies her status as my favorite A-list actress. Her characters are so normal, it’s tempting to use the words “self-effacing” to describe her performances in the last two films. But that wouldn’t be accurate. Her characters in these two movies are not shy or bashful, they are simply normal, and there is something refreshing about a Hollywood star being able to convey normalcy. She listens well, and she always feels present in a scene, even when she is not reciting lines. Rockwell and Moretz are in tune with her as well. In a key scene where Megan reveals some secrets to Craig, the actor doesn’t anticipate what she is going to say and doesn’t overreact to give himself a more flashy scene. Shelton gets good performances out of all of them. I’ll definitely get in line for her next movie as well.