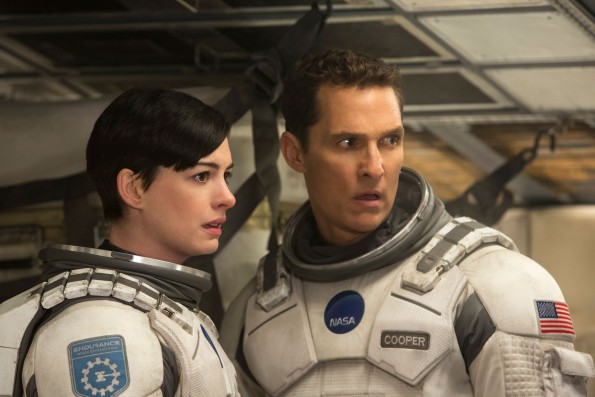 The critical problem is, I suppose, how to not make Interstellar (★★½) a scapegoat for being the epitome of so much one finds tedious in the contemporary Event Movie: the ratio of effort spent on spectacular cinematography as opposed to good story telling; the crescendos of music that start in at the end of the the first hour and just keep getting bigger and louder; the rapid cutting between parallel story lines that each swell, peak and climax simultaneously; and the characters who summarize their feelings and narrate their own action because the viewers can’t be trusted to look up from their cell phones and actually pay attention to what is happening on the screen.

Matthew McConaughey plays Cooper, an engineer at heart who has been forced into farming in the wake some unnamed and vaguely defined environmental deterioration that causes giant dust storms and makes it impossible to grow any food but corn. When his cutely named daughter, Murph (a deconstruction of Murphy’s Law) begins fighting at school (she insists the moon landing was real even though the government has censored all mentions of space travel) and talking to a poltergeist in her room, I thought I had wandered into an M. Night Shyamalan film by mistake. Murphy’s ghost speaks to her by knocking books off her shelf and causing dust mites to fall in patterns the film alternately claims are Morse code–no binary language–no, strike that, actually Morse code, really this time. The dust in the wind sends them coordinates for a hidden NASA lair where Michael Caine is plotting to save the world by sending explorers through a wormhole that has inexplicably appeared around Saturn in order to scout out  new planetary cribs. Cooper is selected to go on one of the missions because he is the best engineer left alive and was “born for” this mission. (That being the case, why NASA had exiled him to a farm is not entirely clear.) At this point, the adolescent Murph inexplicably turns into a three year-old, insisting that dad should stay with her rather than try to save the human race.

And so on, and so forth. A full plot synopsis of Interstellar would probably exhaust my thesaurus’ stock of synonyms for “inexplicable.” The modern movie script is built around spectacular set pieces (of which this film has quite a few) but seldom devotes much time to drawing the characters who dash and dart through them and even less injecting their fights and flights with any actual dramatic tension. Raise your hand if you think there is any chance Cooper fails and the human race becomes extinct. Interstellar is listed as “sci-fi” at IMDB, but its beats and rhythms are all action-adventure. There are allusions to plenty of science-fiction films of the past–Contact, 2001, Gravity, The Black Hole, Signs, Looper, Close Encounters of the Third Kind, The Day After Tomorrow–you name it, the film references it. But rather than build or expand on any of the ideas from any of these films, Interstellar simply echoes them. It’s an anthology of space movies rather than than a fully realized story.

Does any of this matter? Probably not. The Event Movie doesn’t have to be fully realized, it just has to not suck. Going to the movies has become like planning a big wedding: the more money and time we invest in it, the harder we work to convince ourselves that we are having the time of our lives. To that end, spectacle is the equivalent of an open bar. In Interstellar, we’re never more than five minutes away from a few stiff ones, and if the film’s emotional palette runs the gamut from determined to plucky without offering much in the way of genuine anger, heartbreak, or wonder, by the end we’ve imbibed enough to safely report a good time was had by all just so long as nobody asks us to get too specific.

On a passing note, I spent a good portion of Interstellar thinking about the pseudo-controversy earlier this year when it was reported that nobody in Noah used the name of “God.” Am I wrong to think that the lack (absence?) of God talk in Interstellar is a weakness in the script? There is certainly plenty of evolutionary chatter in the film, and I am not saying that a good science-fiction film needs to be Christian at its core. But when large groups of people–indeed the entire human race–are facing imminent death (on a personal level) and extinction (on a global level), would personal and institutional faith simply disappear? Cooper does use the word “supernatural” once–to describe how he and Murph received directions to NASA. But even when the characters are discussing how the wormhole that is going to save the human race appeared outside of Saturn, the word “God” seems like one of the verboten words in a cosmic game of Taboo.

I was also a little curious that little to no thought was given to what–if any–parts of human culture are worth saving. A nod is given towards the biological necessity  for biodiversity, but other than some incessant parroting of Dylan Thomas no indication is given that either Plan A or Plan B for the survival of the human race entails any attempts to preserve knowledge of human history, art, or culture. Apparently we will take baseball, science, and “Do Not Go Gentle Into that Good Night” into the next phase of human evolution with us. Maybe the omission of art and religion was intentional, a claim that humanity’s survival depends on giving up the things (attitudes, beliefs) that nearly drove it to extinction. If so, I would have respected the film more if it came out and said so; had that been the case, Interstellar might have been a film worth arguing about.

As it is, I suspect there will be some arguments about Interstellar but that they will mostly be about taste rather than judgment. And they’ll fade pretty quickly once the next Event Movie rolls around. Less than twenty days until Mockingjay, right?