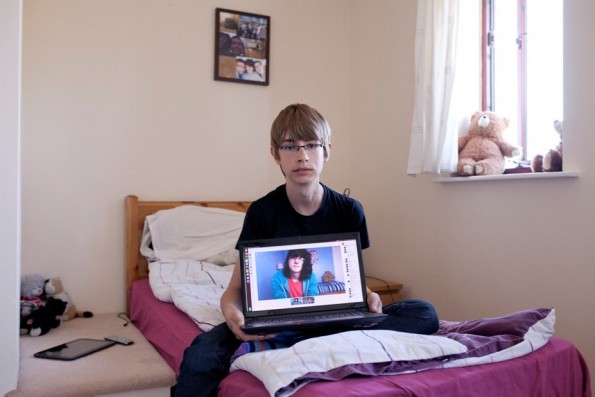 “The important thing is how it is changing us,” notes Nicholas Carr, a professor and author of The Shallows: What the Internet is Doing to Our Brains, in the opening minutes of InRealLife, a 2013 British documentary directed by Beeban Kidron. Carr’s words serve almost as a declaration of intent for InRealLife; these words also represent how difficult it is for anyone to understand the Internet. When Carr uses the pronoun “it”, he prompts a dizzying array of topics, ranging from cyberbullying to digital privacy to online shopping, that deserve nuance and depth. Unfortunately, like a teen who is texting four different friends at once, InReaLife struggles to keeps its focus on any one issue, and thus loses much of the emotional power it brings to the technology debate.

At its outset, InRealLife features an interview with two young, British teens who spend a fair amount of their free time looking at Internet porn. One of the teens, Ryan, seems to realize what he is doing isn’t making him happy, but he won’t stop. “I find it so hard to feel a connection with a girl,” he says. We should be feeling sympathy for Ryan, a kid who obviously hasn’t found emotional outlets outside of the Internet. But when we watch him sexually harass London strangers, that sympathy evaporates. Is Kidron asking us to feel empathy or outrage? Instead I was left with a mild sense of confusion. Later, Kidron shows a different side of sexual harassment: the victim’s. She conducts an interview with Page, a fifteen year-old girl whose phone is stolen. A few boys will only give the device back if she performs sexual favors in return. It’s a tough decision for Page, and Kidron makes much of Page’s addiction to technology, but I’m left with a different feeling. Perhaps, to paraphrase Julius Caesar, the fault is not in our phones, but in ourselves.

For all of InRealLife’s stumbles in some more intimate moments, the documentary finds its footing by attacking the Goliaths of the Internet: companies such as Google and Facebook that monetize our every click. “The ugliest sides of capitalism are about turning everything into a for-profit activity just to soak out as much money as possible for them,” social media scholar dana boyd says. Another interviewee, NYU professor Clay Shirky, worries that Facebook could decide to delete all political speech if it would increase their profit margins. “Now I don’t think Facebook is going to do that,” he notes. “But they could.”

In just the last few months, real events have made InRealLife seem startlingly prescient. Facebook revealed in June that the company had manipulated the News Feeds of nearly 700,000 users, in an effort to test the effects of “negative emotional content” and “positive emotional content.” Kidron also tracks down infamous Wikileaks founder Julian Assange, who delivers a few broadsides about privacy that seem particularly relevant after the revelations about the NSA were leaked by Edward Snowden in 2013. Interviews with Assange and tech novelist Cory Doctorow are necessary, even if their alarming tones beg for more information and time than Kidron is willing to grant them.

But it is important not to forget what InRealLife markets itself as: a film that addresses the impact of technology on teens. With creaking, crackling background music, InRealLife sometimes seems to be portraying a world that might shatter at any minute, Kidron interviews Tobin, a 19-year old who has watched his potential wasted away when an Xbox addiction led to his dismissal from Oxford, and the parents of a 14-year old boy named Thomas, who commits suicide after being cyberbullied.

The internet is dangerous place, for sure, but so are the streets of the inner city and football fields of our high schools. Kidron says in an early voice-over that “I always have and always will believe that the Internet can be an instrument that delivers the full promise of human creativity.” Neither this utopianism, nor the alarmism of her documentary is representative of how teens perceive the Internet. To understand the impact of cell phones and social media on teens, we need to see the all the relationships, all the websites and all of the identities—online and offline—of these teens. What the viewer gets is less real and less interesting than the Internet and teens deserve.

However, the final story that Kidron tells is the most affecting of InRealLife. Kidron profiles a 15-year old gay teen named Tom, who starts up an online relationship with another teen, Daniel. They Skype and text and, chat and when they finally meet in person, they hold each other in a long hug. The final images of the movie, in which Tom and Daniel sync the data of their Samsung phones as they lie into the same bed, is a reminder that for all of the millions of miles of internet cables and googleplex worth of data, the people we hold in our arms will always be more important the devices we hold in our hands.