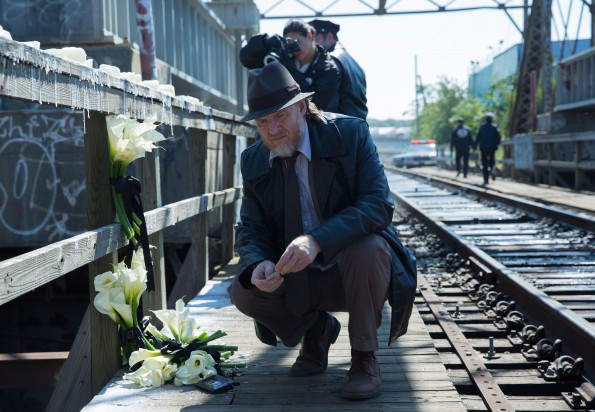 That adage is so useful and appropriate in many different areas of life. The sixth episode of Gotham proves this right once again. However, before rushing into that, let’s focus down on the bad and good of the week.

-The criminal of the week, the Goat, was scary/creepy and what you’d want from a serial killer (as odd as I know that sounds), but thanks to “Chekov’s Psychiatrist” I pretty much had this figured out way too early on. Gotham is going to have to avoid these tropes or find a way to use them in a way that actually turns them upside down and creates true moments of shock for viewers if it will ever have sequences and episodes that leave viewers with a lasting memory.

-I mentioned “less is more” and although the show did that in a great way, it actually failed at that by repeating retired Detective Dix’s “No Heroes” Golden Rule for Gotham too many times to where I was thinking that someone hit the paste button in the script. This actually shows one of the things Gotham has struggled with. How do they include these moments that point to the future of the city with its villains and heroes without clobbering the audience over the head?

-I suppose we will have to wait until next week to see if there is an explanation but it just seemed way too deus ex machina for Cobblepot to show up at the GCPD just as MCU was arresting Gordon. I understand the way this creates a more dramatic scene but it also strains credulity.

-Did you notice what was missing this episode? That of course would be the un-holy trinity of Fish Mooney, Falcone, and Maroni! I am not sure if this was intentional or if the script just didn’t leave room for them but by not having to get every character and every arc in the episode, the show ended up feeling more cohesive, better paced and frankly just better overall. Perhaps future episodes can utilize a “Less Is More” approach by focusing in on specific characters for more of the episode instead of having a lot of scenes with a lot of different characters.

–Gotham took that focused approach with Bullock this week and it was really effective. Donald Logue finally got something worthy of his acting chops and the Bullock character now has some depth that gives his relationship with Gordon some much needed meaning. Flashbacks are heavily used on Arrow, so I wouldn’t expect it to be a narrative lynchpin on Gotham but the occasional use could work wonders.

-We didn’t get much of Bruce And Alfred this week, but I’m intrigued to see how Selina’s activity at the mansion plays out. Bruce and Selina have always had a complicated relationship, and these kinds of things add a dimension to that relationship that I look forward to seeing play out. Does Selina ever tell Bruce about witnessing the murder of his parents? Does she know his secret identity before he ever reveals it to her?

-“Acting is reacting” and as Joey Tribbiani would say, “…and this does not mean acting again.” Shawn Pertwee’s performance as Alfred has been one of masterful reactions. In “Spirit of the Goat,” Pertwee is spot on as Alfred straddling the line between dutiful-servant and would-be but also hesitant adoptive father. He says so much without saying anything, it is incredibly moving to see his heart-break for Bruce. Will he become more of a father figure to Bruce? How will this season of their lives effect Alfred’s service to Bruce once Batman begins?

-Convenient timing-issues aside, I thought concluding the episode in the middle of the action at the GCPD was an inspired choice. This kind of ending makes viewers want to see not the very next thing to happen but the very next THINGS to happen.

The ending, and the subsequent preview helped me feel that Gotham is capable of being a good show on its own, without needing to be supported by the broad shoulders of the Batman universe. Solid plot-lines, well focused episodes and strong acting will bring more people into the show and help keep those of us that are with it now here to stay for the long haul.

Did you think this episode showed as much improvement as I did? Let me know!

Next week looks to be an action packed offering complete with the introduction of Victor Zsasz. To get a feel for how this character has been portrayed in the past check out the following videos from the Arkham video-game series. How does Gotham’s handling of this bald-psycopath differ? Is it better?

Tags: Gotham, Spirit of the Goat

One Reply to “Gotham Episode 1.6 Recap: Spirit of the Goat”