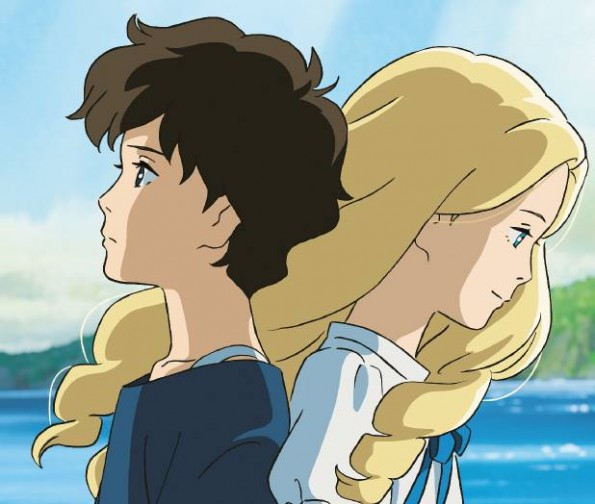 “In this world there’s an invisible magic circle. There’s an inside and an outside.” Cut to clique of three girls happily giggling. “Those girls are the inside the circle.” Cut to Anna quietly sketching on a bench away from everyone else. “I’m outside, but it doesn’t really matter.”

That is the opening voiceover from Anna (Hailee Steinfeld), an extremely shy, socially awkward, and very anxious girl who has a talent for sketching and lives with her foster mother, Yoriko (Geena Davis). It fairly quickly becomes apparent that Anna is not outside the circle because her peers exclude her; on the contrary, when she has a severe asthma attack and leaves her book bag at school, several of her classmates bring it home for her. Also, when she moves to a new town, several of the other children go out of their way to make friends with her. The reason Anna is outside the circle is her own choice to shun interactions with others and her low self esteem which makes her afraid to form any friendships.

The first hint of Anna’s exceedingly low self esteem comes when we see her sketchbook filled with impressive drawings, yet she prevents anyone from seeing them, claiming the drawings are no good. Following that, she is sorry she had an asthma attack, because she cost her foster mother money in doctor’s bills. The extreme lack of self esteem briefly had me wondering how Anna manages to function as well as she does, but the film does show her to be a resourceful girl as long as she can stay away from people.

After Anna’s asthma attack, the doctor thinks she should go somewhere quiet with cleaner air to relieve both her bronchial tubes and the stress from school. Yoriko sends Anna to her sister and brother-in-law Setsu and Kiyomasa Oiwa (Grey Griffin and John C. Reilly). As Anna departs, Yoriko noticeably does not wish for her to come back healthy, but instead, “nice and happy.” 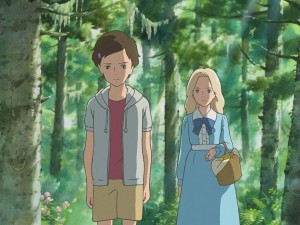 That parting line coupled with Anna’s behavior makes it clear that When Marnie Was There (★★★½) is primarily meant to be a story of a girl who overcomes her self-hatred and learns to make friends, or a girl who moves from outside to inside that magic circle. The one problem is for nearly all of the movie, Anna is a cipher, shunning everyone’s company while she alternates between mumbling as little as possible to adults and being downright mean to other girls who try to befriend her. She drastically changes toward the end, but it is a change that is too long in coming.

There is one girl whom Anna manages to befriend. She is the titular Marnie, a young blonde haired, blue-eyed girl (Anna is very self conscious about her own blue eyes, which are extremely rare in Japan) who lives in an old mansion which seems abandoned in the day yet comes alive at night. As might be expected, their friendship is incredibly unusual. Both girls demand that their friendship be kept a total secret, and they plan to meet each night where they will ask each other three questions about one another. This friendship slightly boosts Anna’s confidence when she is with Marnie or by herself, but it hardly seems to affect her relationships with others.

Whether Marnie is a figment of Anna’s imagination or the ghost of a girl who once lived in the mansion is kept a mystery right up to the film’s end, and the elliptical editing does not give any clues as to which scenario is correct. Once the viewer learns Marnie’s identity, it is easy to look back and notice three earlier hints which would be obvious if they were juxtaposed, but the film substantially distances those hints. There was one clue in particular that I could not believe I had overlooked.

As a fictitious character, Marnie forces Anna to confront her self-hatred as well as her anxieties and fears of being abandoned. Marnie also provides a common ground for Anna to form two unusual friendships with other townspeople who share an interest in the mysterious girl. When Marnie Was There is a rare family film with a somewhat unsympathetic protagonist who slowly changes and overcomes her self-loathing. Albeit, that change occurs a little too slowly, but the use of fantasy to affect that change is remarkable. With the future of Studio Ghibli in limbo, I hope to see more simple, beautifully animated movies like this about the importance of relationships and human connections.

Tags: Ghibli, Hiromasa Yonebayashi, When Marnie Was There