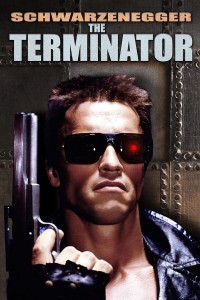 If you’ve ever wondered how my reviews are constructed, these notes should give you glimpses into my process. Notes record my thoughts while watching the film. Later I can look back and look for patterns or ideas. A review will never incorporate every note, rarely even half of them. Like annotations and marginalia made while reading a book, the notes serve as reminders to me. Some are dead ends, but others are bread crumbs left behind to lead me back to points that I want to remember and process more leisurely after the movie is over.

Action movies do not have the same cachet as dramas or even (historically) comedies. You’ll never see a film like The Terminator on, say, AFI’s Top 100 list. But it is a very good movie, an extremely well-executed example of its genre.

1) The prologue says the machines “rose from the ashes” of our nuclear fire. Subsequent scene states that Skynet triggered the war.That seems to me an important difference. It’s not that the war created the conditions for machine rule. Rather it was the final step of a process. Could this also be a comment on Mutually Assured Destruction? Machines don’t care about individual deaths, so if they believe they can evolve faster, mutual destruction is a viable strategy.

2) Bill Paxton in bit role as one of punks who confronts naked Arnold! We tend to think actors emerge from the ether with their break-out roles. Fun to see veteran of later Cameron movie in a bit part.

3) Reese falls from the sky a little. (We don’t see or hear Arnold post-transort until he is getting up from a kneeling position.) I’ve always wondered about the whole teleporter thing….perhaps because I played Dungeons & Dragons. Even in Wizardy you occasionally teleported into a solid wall, and that wasn’t good. What happens if he teleports into the bottom of the ocean?’ Later he says that the machines knew what city but not what part. So there appears to be some geographical control over where they are teleported/time traveled to, but how do they know he won’t appear in the middle of a prison cell…or ten stories instead of three feet off the ground?

4) A cop leaves an armed shotgun in the unlocked front seat of a squad car while chasing a suspect? I appreciate that Cameron answers the logistical question of how Kyle arms himself (and gets clothes), but this point seems so implausible that it has the opposite effect of what is I think intended. It draws my attention to the question rather than answering it.

5) Funny how the most dated element of a film set in 1982 is … a phone book in a pay phone booth. There are, in fact, quite a few phone books, all in pretty good condition, in and around city.

6) Sarah’s (Linda Hamilton’s) waitressing uniform…is actually kind of sexy in the way it looks soooo dorky as to be borderline fetishistic.

7) I do fault the flash-forwards–particularly with the 80s techno music, for making war look and sound too cool and video-game like.

8) While I understand the brutality of the killing of Sarah’s roommate may be thematically necessary to raise fear level for Sarah, I confess that scene (the way it is shot) has always bothered me.

9) Speaking of the phone book–it’s disorienting, too, how the Terminator finds her license in the apartment. Wouldn’t she take it with her? Today, everything is online, and one assumes a computer would hack. So the pre-Inernet nature of the world  really strikes me. How different this film would be even five and especially ten years later.

10) When Sarah is running away in bar and the  Terminator shoots and kills the woman behind her but in the line of fire, that is the type of collateral fatality we don’t see in action movies much any more. So too when the desk cop is crushed by the car busting into the precinct. Today we may occasionally see bystanders get hit in shoot-and-fall violence but rarely do we see them die and almost never do we see them do so in a suffering way. Part of this is a change in movie goer’s sensibilities. As comic book and disaster movies have upped the death count they have simultaneously desensitized us by making the deaths cleaner.

11)  So if the holocaust is “about two years from now” and Reese “grew up after” that means he is at least a couple years younger than John Connor, who one presumes would be between 1-2 years old at time of the event. One presumes that Sarah is dead at the time John knows Kyle–he has to give Kyle a picture  to know what she looks like–but the film is surprisingly quiet on this point. Additionally, since Sarah doesn’t yet have a son, doesn’t the logic of time travel dictate that she has to have survived? I guess that’s part of the whole initial premise that one can change the past.

12)  “Nobody goes home; nobody else comes through” might be Cameron’s version of “Darth Vader killed your father.” Only true from “a certain point of view.” Exhibit A in my argument that this should never have been, nor was it meant to be, a franchise.

13) The snottiness of the police pyshologist strikes me as an unfortunate caricature. Even if he didn’t believe Kyle, why would he mock him? I would have written or played that part with more empathy towards the person he thinks is delusional. That might be more persuasive than trying to bully the on-the-fence Sarah into disbelieving him.

14) Linda Hamilton’s acting in the scene where Sarah is watching the police video of Kyle is pretty terrific.

15) So, too, surprisingly, is Arnold’s, particularly in scene where he massacres the cops. He does so with machine-like indifference, not the false bravado of the modern action movie killer.

16)  The scene where Sarah calls her mother (actually Arnold on the phone imitating her voice) always struck me as implausible, bordering on a character continuity error. I get that Cameron the writer needed some way to explain how Terminator found her, but I think this was a little clumsy.

17) Michael Biehn is not exactly in bad shape, but his lack of six pack abs, not just in comparison to Arnold’s but to modern, buffed-up action actors, contributes every bit as much as Hamilton’s waitressy performance in creating the film’s “normal people” facing more powerful antagonists theme.

18) Stop-action of the Terminator skeleton is pretty bad by contemporary standards. Temporarily takes you out of the movie in the same way the obvious green-screen effects of Luke in the fighting pit do at the beginning of The Return of the Jedi.

19) Isn’t pulling out shrapnel, particularly without a tourniquet, supposed to be really, really, dangerous?

20) Kyle is (at least) twice paralleled to the Terminator. First there is the scene where he discusses the effects of war and how emotions get you killed. Later, when Sarah turns over his dead body, his disfigured eye visually echoes that of Arnold’s casual mutilation earlier in the film. I like that the script doesn’t overdo these parallels, but I definitely think there is a latent theme in here about the dehumanizing effects of being a soldier.

21)  Great cut with ambulance door being shut to black and then epilogue. Cameron is not afraid to cut a scene abruptly. Yet previous scene, post-Terminator torso being flattened, lingers on Sarah’s shaking body with Terminator arm on her shoulder (and between her and camera) allowing emotional dissipation of energy. Very purposefully edited film. Cameron has always been a master of pace.

22)  A tape recorder? Besides that looking as dated as a phone book, it strikes me as the least likely choice for Sarah to record her thoughts or pass them on to John.

23) Funny too how the last shot is of Sarah putting on sunglasses also echoes the earlier more iconic shot of Arnold adopting the glasses.  She is becoming the soldier. Not saying there is a moral equivalence in these juxtapositions, but I do wonder if there is a subtle reminder that the machines are (unlike, say, the Buggers in Ender’s Game or the aliens in Aliens) an extension of ourselves….and not the best part of ourselves either. The franchise never really explores this this theme, which is a shame. Changing the future is always about some tactical plan to achieve a different result, not about changing our relationship to the world, each other, or ourselves in such a way that diffuses the conditions. This reminds me of Clarke’s notion in the 2001 novella that the obelisk was placed on the dark side of the moon with an intention that a species could only find it after they had discovered nuclear power and yet learned not to destroy each other. (Or was that some other sci-fi premise?)

24) It’s shocking how short the final credits are given how accustomed we’ve become to the 10 minute final…but…got..to…wait…and…see…if…there…is…an…Easter…egg credits.