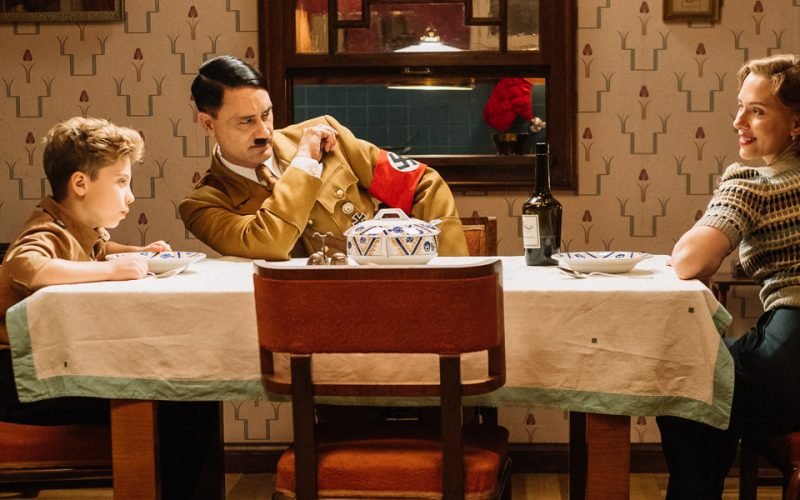 Taika Waititi’s Jojo Rabbit has emerged from the fall festival circuit as the still-early-but-not-way-too-early leader in the clubhouse for awards season. It won the People’s Choice Award at Toronto (as did last year’s surprise Best Picture winner, Green Book) and won over my own skepticism when it closed the local Filmfest 919.

Comedies don’t usually fare well come awards time, but Jojo Rabbit is a comedy with a dark setting and that addresses serious themes. More importantly, it uses comedy not to dismiss or diminish the seriousness of those themes but to defamiliarize them so that the audience might consider them anew. As Dallas Willard says in The Divine Conspiracy, “Sometimes important things can be presented in literature or art that cannot be effectively conveyed in any other way.”

It has been over a century since the publication of Mark Twain’s The Adventures of Huckleberry Finn, and since that time it has become something of a critical cliché to claim that any book or film with an adolescent protagonist is imitating it. To Kill a Mockingbird, Riddley Walker, and Anne of Green Gables are three examples of disparate novels in which critics have heard echoes of Twain’s voice and purpose.

Some of the features those stories have in common with Jojo Rabbit, beyond simply having an adolescent protagonist, is that they are filtered through the consciousness (point-of-view) of the adolescent, that the adolescent is often out-of-step with the prevailing culture of his or her time period, and that the adolescent’s moral or intellectual innocence often allows the writer to critique the broader culture.

In the case of both The Adventures of Huckleberry Finn and Jojo Rabbit, this critique of the dominant ideology (racist pro-slavery sentiment, and fascist anti-antisemitism) is underlined by the growth of the protagonist’s moral consciousness prompted by prolonged exposure to a representative of his culture’s demonized or marginalized people-group.

Author’s note: Ahead there are plot spoilers.

What actually sold me on Jojo Rabbit, however, is that unlike some of the other stories referenced, it shows the moral development of the adolescent to be fragile and prone to setbacks.

Academic tradition sets the end of American Romanticism in the 1860s, so it’s not strictly correct to label Twain’s novel Romantic. But Romanticism wasn’t simply a self-contained movement that began in the early Nineteenth Century and ended after a few decades; it acted as a pivot point — a time in which certain long-standing philosophical and social assumptions were toppled and replaced with others.

Among the most important shifts (that started before Romanticism and continued after it) was a lessening in the belief in original sin and, hence, innate depravity. In non-theological terms, the idea that man (or woman) was innately sinful and must be saved was gradually replace with the cultural belief — one I would argue is still widely held today, even by professing Christians — that humans are innately good. Because a belief in humans’ inherent goodness must account for the presence of so much evil in the world, it became customary in literature to see evil in strictly institutional terms. The child (or, in some cases, the member of an less economically and politically developed culture) was championed as being closest to the state of original innocence. The central moral problem was not how to escape the bonds of inner corruption but how to preserve one’s moral innocence in the face of cultural peer pressure to conform.

“I am ashamed to think how easily we capitulate to badges and names, to large societies and dead institutions,” Emerson wrote in “Self-Reliance.” Later in that same essay, he says of the modern spirit that makes it hard for man to listen to his inner conscience, “Now we are a mob.” In one of Jojo Rabbit‘s cheekier but still effective moves, Waititi juxtaposes throngs of screaming Germans at Hitler rallies with throngs of screaming Americans and Brits during Beatlemania. The point is not that there is no difference between fascism and musical celebrity, it is that mass movements (political or commercial) tend to rely on thoughtless conformity, which, in a post-Romantic world is always more likely to lead to one away from morality rather than towards it. Conformity is a decision to prioritize and accept an institution’s morals and values rather than to proclaim one’s own.

If one wants to advance Huck Finn as an exemplar of Romantic innocence, it is easy enough to point to the seminal moment where Huck chooses (what he assumes will be an inevitable judgment that he will be cast into) hell over returning Jim to slavery. After all, he does what his conscience prompts him to do rather than what the institutions of his day tell him is right. But such a reading often glosses over the final chapters in the novel. Huck, after having made such a decision, passively sits by and allows Tom Sawyer to endanger Jim’s freedom by turning his escape into a childish game. Perhaps more damning still, he lies about seeing the slaves at the Phelps’ farm entering a room from which money has been stolen, even though this results in their (temporarily) being sold and slave families separated.

Jojo’s moral awakening is a bit more linear, but there is still a fascinating scene, late in the movie, in which he tries to make himself stab the Jewish girl hiding in his mother’s attic. Part of what that scene reinforces for me is that Waititi views Jojo not simply as an innocent who has been led astray by Nazi ideology but as a naive human who has not yet developed a positive moral compass. (It is telling, in this regard, that Jojo’s mother hides the presence of the Jewish refugee from her son and confess to her that she is worried not not so much about what her son is becoming but about what he already is.)

Jojo Rabbit, like Huck Finn, is a comedy. And we are conditioned by a literary heritage going back all the way to Aristotle to expect happy endings in comedies. It is hardly surprising that in the cynical Twentieth Century, objections (such as Hemingway’s) against the ending of Huck Finn had less to do with the contradictory messages about Huck’s moral awareness than they did with the perceived realism (or lack of it) of allowing Jim to survive when the majority of escaped slaves did not.

I would expect similar charges to be laid at the feet of Jojo Rabbit. Given that six million Jews died in the Holocaust, one could certainly be forgiven for expecting the film to end differently than it does — for Jojo’s final moral awakening to be brought about by tragedy and guilt rather than simple self-assertion. Yes, there’s a certain satisfaction at seeing the young boy kick the psychological manifestation of the (in the film’s timeline) already-dead dictator out a window, but is this a cheap shortcut to an easy cheer?

Perhaps. But if this scene is a bit too pat and pandering for my taste, the film at least limits its pandering to select moments and complicates those moments by showing, like Huck Finn, that they are relatively rare (even for the conflicted) and that they are sometimes followed by regressions to the mean rather than by consistent lives of easy virtue and triumphant resolution.