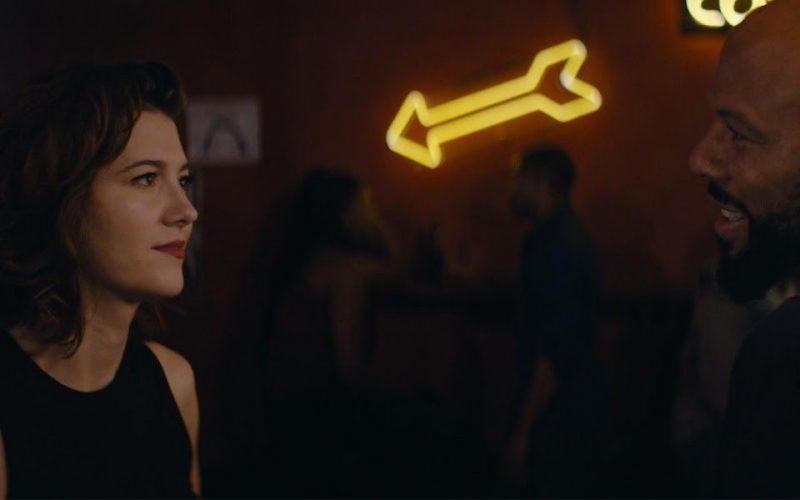 Nina (Mary Elizabeth Winstead) might be described as an angrier, more messed up version of Amy in Trainwreck. In the first few scenes of the movie, she comes off stage and vomits, picks up a guy at a bar, rehearses a bit about how her lover hits her and she doesn’t mind it, and shows up at her lover’s house to beg his wife to keep him in line because she, Nina, just can’t help herself.

When Nina heads to Los Angeles to compete with other women for a comedy special on a cable newtork, Rafe (Common) shows up to penetrate her cynical facade with his disconcerting honesty and courtly patience.

Such a summary makes the film sound familiar, maybe even cliché. But it’s not. Stick with it,  and you begin to notice some differences from what passes for romantic comedy. Stick with it a little longer and you may notice that it’s not even a comedy, really. I suppose the biggest difference is that All About Nina is in no particular hurry to redeem or rescue its heroine.

Don’t get me wrong. Nina is impatient with herself and exhausted by her own anger. “I usually just fuck the wrong guy and move on,” she says. She’s not content with herself, and neither is the film. It’s just that there are worse things than being angry, and self-destructive and one of them is never asking why. We might ask why she does the things she does, but we don’t. As a result, when she finally tells us, her explanation feels less like an excuse than a cry of pain. (I don’t think Nina would like that assessment though. She reminds me of Maurice Bendrix in The End of the Affair, who insists “I’m not in pain…I’m in hate.”)

I guess what is fresh about the film is that rather than be a set up for a climactic biographical confession, it so carefully paints the toxic environment women have to negotiate that her anger doesn’t really feel like it needs explanation. Thus, when it is, we are forced to rethink our assumptions and interpretations of Nina’s behavior. To pick just one example, Nina has to decline a drink offer with an apology: “I realize it’s a mixed message because I was complimenting you…” To constantly have to scrutinize your most casual interactions lest you say or do anything open to the least misinterpretation is exhausting. The movie gets that the constancy of such pressures compounds the frustration of any single encounter.

That’s all very cerebral though. What I liked best about this very visceral movie is that it is a surprisingly intelligent love story. Too many comedies revolve around stupid misunderstandings of willfully stupid people. It’s nice to see flawed but intelligent people groping towards happiness–the efforts these characters put forth to understand themselves and each other makes it easy to root for them.

All About Nina has a repeat screening at Filmfest 919 on Sunday, December 7. It opens in Durham on October 12.