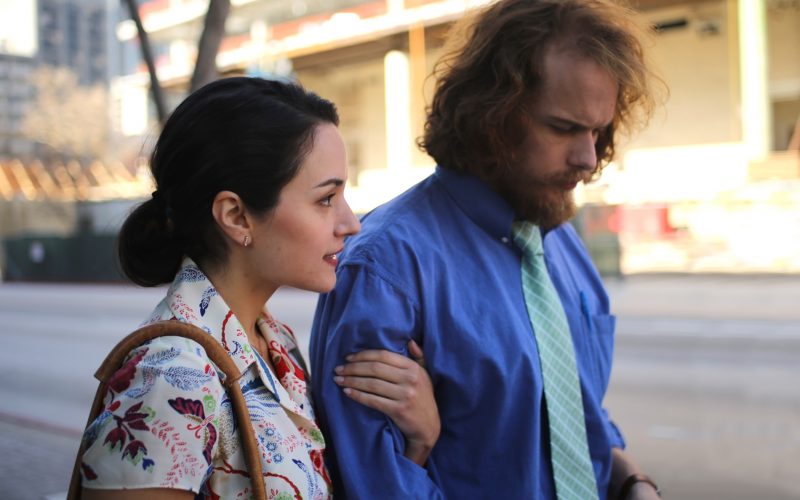 Everyone wonders about how past choices affect their lives. They constantly ask themselves, “What would have happened if…” The question turns into obsession. One thinks on what could have been. How much would have changed? Or, in retrospect, was it the best one in the end? When the Starlight Ends follows Jacob, a writer who is dealing with the loss of his relationship amid professional success. Although the film focuses on Jacob, all the characters contribute to philosophical discussions involving writing and personal reflections on Jacob’s choices.

The plot revolves around Jacob (Sam Heughan) struggling with his break-up with Cassandra (Arabella Oz). She was his inspiration for his writing, and he is left constantly thinking of her. In the past, Jacob wanted to pursue his writing, but his job gave him little time to practice it and provided little fulfillment. With the support of his girlfriend, he is allowed to fulfill his passion full time. Cassandra takes a second job in order to handle the financial burden of Jacob’s unemployment while writing. His writing eventually succeeds and he starts to publish. His career takes off, and he is able to pay back her support with a new car and their dream house. However, their relationship strains due to his new-found success. He gradually spends less time with her to only focus on his writing. She becomes disinterested in his parties and activities due to his lack of affection and starts to distance herself from him. Also, his new biography details personal moments between the both of them. She takes issue with this, but he still insists on publishing the book. His career becomes his obsession, so she feels alone. Cassandra feels that both she and Jacob have different paths that they want to follow. They break up and Jacob wonders for five years if that was the right decision. Sam Heughan’s performance as Jacob convincingly portrays the character’s passion toward Cassandra as well as his obsession with writing. During his moments of writing, the movie creates imagined experiences with dramatic or minor twists. One of these scenes involves an imaginary actress, Cindy, played by Arabella Oz as well. Jacob sits in a diner attempting to write a believable scenario of asking a high profile woman out. He changes the scenarios from dying from a random robbery to dying as if he did it out of love for the woman. The scene surprises the viewer when it abruptly cuts to him blankly staring while thinking about the scene. This moment allows him to ‘show off’ his ability to portray nervousness, fear, dramatic love, etc. Other scenes highlight his distance toward Cassandra, but still able to see the rift in their relationship. During the movie, he narrates their distance by saying that “she’s already gone even though her body is there.” Arabella Oz works well as a supporting actress for Sam Heughan. She portrays three characters with ease in the original story and those set in Jacob’s imagination. Arabella effortlessly conveys the supportive girlfriend, the random famous actress in the diner, and the suspiciously beautiful woman who broke down on the road and later reveals she has been called to kill Jacob because he saw something in the stars that he was not supposed to see. She complements Heughan and develops on-screen chemistry with him. Each character feels completely independent from the other and feels like a completely different actress is portraying her. In some moments or scenes, she seems to take more command of the scene than Sam such as the car ride as Chelsea. However, Sam reclaims the spotlight with philosophical lines both in the scene and afterward. Arabella’s control of the scenes work well because she is Jacob’s muse.

Only two aspects of the movie needed improvement, the constant shifting of scenes in time and one scene with a green screen effect. The fictional and reality scenes differentiate enough to follow along, but the switching between past and present events with Jacob’s life are harder to distinguish at times. One scene involving a fictional scenario where Jacob sees a star he was not supposed to and is hunted down by Chelsea has a terrible green screen effect. The background stands out with an off-putting, obviously fake texture. The movements of the ‘car’ and the road are off because some parts where the road shifted slightly indicated that the car should have driven off the road or should have hit oncoming traffic. No other scenes appear to use this technique.

When the Starlight Ends blends philosophical reflections on happy times and melancholy wondering about what could have been. The supporting characters are well developed in addition to the two protagonists. Even in the aforementioned scene with clumsy effects, the movie makes the viewer feel for the characters and the choices they make.

Tags: Where The Starlight Ends