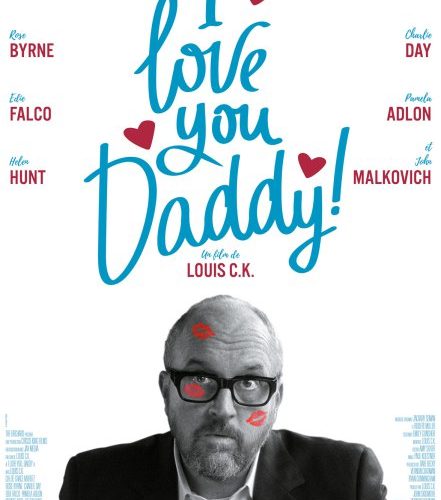 I Love You, Daddy, directed by and starring Louis C.K., depicts Glen, a successful writer, who has a distant relationship with his daughter, China, and attempts to have more involvement in her life. However, his career and personal life decline when quick decisions and lack of judgment cause him to fail writing a script and unable to cast lead roles for a sitcom. As Glen’s reputation plummets, China turns away from him out of rebellion due to his fears that Leslie (John Malkovich) is trying to have a relationship with her even though she is under eighteen.

While this movie had a potentially interesting plot, it failed as a comedy.  Problems that I had with this movie included: crude humor and subject matter pushed too far, uninteresting main characters, and underutilization of supporting actors.

The subject matter of the movie centers on a controversial and uncomfortable theme–older men fooling around with under-aged women. While Louis C.K. walks a fine line between comedy and uncomfortableness in his comedy, here the balance isn’t quite right. The character Leslie, played by John Malkovich, is rumored to have infatuations with under-aged women and has an attraction to Glen’s daughter China, played by Chloë Grace Moretz. Malkovich is one of the better actors in this movie, but the focus of the plot is still unsettling.

Other problems also keep the film from working as a comedy.I Love You, Daddy contains forced language and the attempts at humor are too drawn out.’ Comedy requires set up and timing to have the most impact; this movie depended too much on repetition and redundancy. Charlie Day’s character Ralph, a joker working with Glen, attempts to bring humor to Glen’s life.  Within the first few minutes of the movie, Ralph repeatedly swears in excitement about Glen’s proposal for a new television show. Explicit language can be funny, but repeated use of the same word can also deflate timing and flow. In a later scene, Ralph hears about Grace (Rose Byrne) wanting to audition for the lead actress in Glen’s show. Upon hearing this, Ralph simulates pleasuring himself due to her attractiveness. While crude humor can have an immediate shock value, his pretend pleasuring continues longer than necessary and just comes across as uncomfortable.

The lack of dynamic and interesting characters also hurts the movie. Ralph serves no other purpose in the movie except for failed comedic relief and the occasional involvement with some of the characters. Charlie Day’s character lacks memorability and never provides anything meaningful for Glen. He acts like a close friend but provides nothing for him during conflicts or decisions. The character could have been more impactful but became quickly forgettable as the story continues. Maggie (Pamela Adlon) could have had more interesting moments, but served little other than commenting on Glen’s lack of father skills. While Maggie and Glen pursue a romantic relationship at the end, the plot feels slightly off because they suddenly get together with little leading up to it.

There are also other characters that could have had more of a spotlight but are underutilized.
Aura (Helen Hunt) is China’s biological mother and only shows herself in two scenes of the entire movie. She and Glen’s only interactions are at the beginning and during Glen’s troubles toward the end of the movie. She could have provided more to the story if the director focused on her more than Maggie. I wanted to see more interactions between the mother and Glen. Her lack of screen time represents a missed opportunity. While a few characters felt underutilized, there were two actors that stood out.

The most interesting characters were Leslie and Grace. Malkovich performs well despite his more controversial character. While the suspicions of his past and his interactions with China are off-putting, he plays his character convincingly. Byrne’s character, Grace, also provides a great ethical problem for Glen’s show by getting involved in his life so that she can get the lead role.

But despite a few good cast members, the film never finds a satisfying rhythm. The quick conclusion left me with unanswered questions. Glen acknowledged that he failed, so I expected a recovery from his pitfall. However, Louis C.K. rushed the conclusion without resolving much of the plot created. The moral or theme in this movie, quoted by Ebonee Noel’s character Zasha, is that “we’re all perverts.” While that is is an interesting argument, the movie does not attempt to do much except assert it. The only conclusion I got was that Glen’s career has had a bump in the road and he attempts to reconnect with his daughter.  While this is a step in the right direction, the end feels forced and rushed.

Overall, I Love You, Daddy failed as a comedy. While Louis C.K. is known for risqué humor, some of it did not sit well with me. This wasn’t a good film that was unfortunately derailed by Louis C.K.’s personal scandal, it was a bad film that will probably get more attention than it deserves because of it.