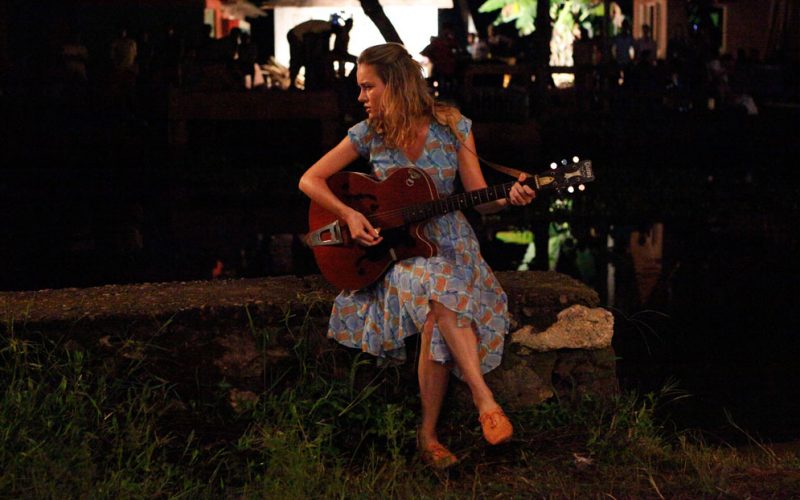 I am imagining an alternate world where Entourage is still on the air and Brie Larson, fresh off an Oscar win for Room, is represented by Ari Gold.  He wants her to follow up Free Fire and Kong: Skull Island with some mindless superhero flick for a gazillion dollars (maybe Captain Marvel?), and she informs him that her next project will be…Basmati Blues. A fluffy musical romance with an unapologetic debt to Bollywood, Basmati Blues is self-consciously square enough to be hip. Larson is Linda, a food scientist whose genetically engineered rice may feed the world. She smiles when she drops things, dances when she is happy, and laughs good-naturedly when an Indian native tells her a rice hoe is used for bashing in monkey brains.

Eventually, we (and Linda) find out the company she is representing is trying to force the Indian farmers into a binding contract to use their rice. We know the company is evil because it is led by President Snow himself–Donald Sutherland doing that raspy, menacing whisper we all love so much from him. He plays being evil with so much relish we almost want the bad guys to win. His assistant is none other than Gypsy Rose Lee (Tyne Daly) who — I am not making this up — dyes her hair green and leads her boss in a patter song on the joys of being bad. Early returns on Basmati Blues have not been kind. Last I checked, its approval rating at IMDB was lower than an American politician’s or a Duke basketball player’s visiting Chapel Hill. Frankly, I don’t get that. This isn’t the sort of movie you wander into because the matinee of The Phantom Thread was sold out. You know what you are in for.

And really, Larson is in the she-can-do-no-wrong stage of her career. I can imagine the hypothetical viewer who has no interest in seeing the film, but I have a harder time conceiving of the one who does watch it and leaves grumpy.

Movies these days are increasingly the same. I hope there is room for the silly as well as the cerebral, for the fun and funny as well as the raunchy. Last night, as I clicked through the menu of shows and movies available on Netflix, I had that depressing but not uncommon experience of trying to remember if I had actually watched some offering about women chased by serial killers or if it just sounded depressingly like every other. Basmati Blues isn’t going to win any Oscars, but I finished the movie happier than when I started.

These days, that’s saying a lot.