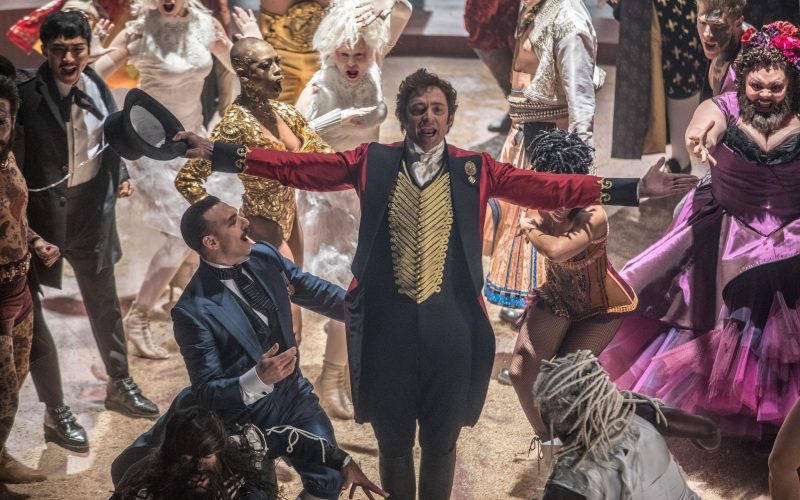 Michael Gracey’s modern musical loosely based on the life of  P.T. Barnum was one of my favorite films of 2017, but it hasn’t exactly been wowing critics. I value films that reward close(r) scrutiny, so I was curious to see if The Greatest Showman would stand up to a second viewing. It did. Here are five things, some small, some not so small, that stood out to me when I watched it again.

1) An Apple From an Oddity

In the film’s opening montage of Barnum’s childhood, he struggles with poverty and steals a loaf of bread from a street vendor. The man catches and beats him, and as the disconsolate Barnum lies on the street, a hooded woman offers him an apple. He–and we–are surprised to see her disfigured face. I mentioned in my annual list of favorite films that the film’s signature song, “The Is Me,” is prompted by the Oddities’ rejection from Barnum, making their rallying around him when the circus building burns to the ground a symbol of grace. I had forgotten this previous instance of grace from a marginalized, ostracized figure. In a lesser movie, that moment would probably be underscored by having the woman appear later in the film. Here, enough time passes between the act of grace and Barnum’s rejection of the Oddities after Jenny Lind’s concert that we also might have forgotten it. I don’t think it is a stretch to suggest that stealing of a loaf of bread invokes another great musical — Les Miserables — since that is the act for which Jean Valjean is incarcerated. The drastically different treatment of two thieves, one punished and one spared, is worth contemplating. If I were braver, I might even suggest that the woman, with her hooded cowl, looks just a bit like the Wicked Witch in Snow White and the Seven Dwarfs. Could this moment be hinting that the film is self-aware that it is a deconstructed fairy tale?

The romance between Anne Wheeler (Zendaya) and Phillip Carlyle (Zac Efron) is simple and sweet. I was struck, though, by how Abdul-Matteen II is able to make the most out of a part that has maybe four lines in the whole movie. I believed that M.D. and Anne were brother and sister, and in a movie that talks a lot about family, it is important to see positive representations of it. How does the film get so much mileage out of secondary characters? That leads me to…

One of the things the film does exceptionally well is use time in the musical numbers to depict how other characters are reacting to what is happening. Barnum’s daughter looking through opera glasses at Jenny Lind, Phillip and Anne tentatively touching hands while listening to the music. Storylines are nudged forward in seconds rather than scenes through the use of a well-placed reaciton shot. I don’t claim there is anything particularly inventive about the reaction shot or montage editing, but director and cinematographer know how to use them to good effect. I thought last year that Steven Spielberg didn’t get enough credit for the direction in The Post because its style, relying heavily on territorial space, wasn’t particularly flashy. I think the same thing could be said about The Greatest Showman‘s editing. Reaction shots, like character proxemics, are meat-and-potatoes stuff. But just because it isn’t innovative doesn’t mean it is easy. There are a lot of characters to juggle, and its important that the cuts hit their musical cues as well. The editing, particularly of the musical numbers, has to be timed perfectly, and it is.

One of the film’s very first visual moments is when the young Barnum looks at a costume in a shop window and the camera captures the reflection of the boy in the clothes of the man. Later, of course, Charity will rightly point out that Barnum is driven to buy a home or risk money to prove her father wrong. Later still, in the closing song, “Home Again,” Barnum will take a photo off the wall of the bar and see his own reflection in the glass of the picture, harkening back to the beginning of his journey. The child really is the father of the man in this movie, and the reflections emphasize that.

I had forgotten that Barnum’s daughter had given up on her “wish” of learning ballet until seeing Jenny perform. During the reception afterward, she tells Jenny she is studying to be a ballerina, and the performance apparently inspires her to return to lessons. I’m on record about how annoying it is when films try to get the audience to root for adultery by making the wife a shrew. This film doesn’t do that, but it also doesn’t make Jenny into a Fatal Attraction-style villainess. In fact, her chastisement of Barnum about being “careless” with other people lands pretty hard. Earlier in the film, the poor Barnum offers his daughter a “wish machine” on her birthday that will keep her wishes safe, even if they are forgotten. I think it is rather poignant that Jenny becomes instrumental in the wish being resurrected after the father has forgotten it because he thinks he has already fulfilled it.

I adore the fact that when Barnum hands his top hat to Carlyle there are no false protestations of “oh I couldn’t.” Just a brief pause and then a sincere question, “What will you do?” Expository dialogue generally reveals a lack of confidence. The Greatest Showman understands the emotional beats of its music and story, and the pay-offs land the heavier for leaving the lead-up to the music. A small but not insignificant thing about this number. Did you notice how much Barnum sings separately from the Oddities (they are in harmony or counter-point) and Carlyle sings with them? A concluding note about Efron: if I were an alien anthropologist from the Planet Zarg who had nothing to go on but this movie and Me and Orson Welles, I would assume he must be one of the most beloved and in-demand actors in Hollywood. Why isn’t he?

One Reply to “6 Things I Loved About The Greatest Showman”