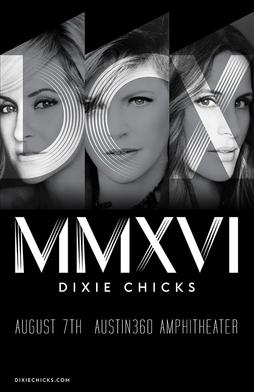 MMXVI opens where Shut Up and Sing concluded just over a decade ago, with the Dixie Chicks singing “The Long Way Around.” It’s been eleven long years now since the three long years when the “top of the world came tumbling down,” and while the outrage at Natalie Maines’s off-hand criticism of President George W. Bush looks retrospectively hyperbolic and affected in the age of Trump, the album that was born from the Chicks’ experience in the eye of the hurricane has aged very well.

The Chicks themselves — or at least Natalie Maines — seem conscious of the passage of time and willing to reflect on ways that it has and has not changed them. In an introduction to the cover of Stevie Nicks’s “Landslide,” Maines quips about how the song’s reflections on getting older feel different to her forty year-old self than to the twenty-five year old who was perhaps more brash and confident. While “Not Ready to Make Nice” is reserved for an encore, the vocalist insists that she prefers to conclude with “A Better Way” precisely because she doesn’t want people to go home angry.

Maines made news last month when she filed for divorce from Adrian Pasdar, her husband of seventeen years. MMXVI is strictly a concert film, so whatever conclusions we draw about the personal lives of the performers are extrapolated from comments reflected through hindsight. In perhaps one of the more retroactively bittersweet moments, the Chicks walk backstage after the concert. Martie Maguire holds an adolescent girl in her arms, sharing a joyful high-five to celebrate a successful concert while Maines, a few feet in front of her, walks alone with her back to the camera. Maybe I’m just projecting, too, but “Easy Silence,” one of my all-time favorite love songs, seems to be delivered with more nostalgic sadness than quiet peacefulness.

That’s not meant to imply friction between the band members. If there is/was some, it wasn’t apparent on stage, where the joy in performing appeared genuine and moving. One of my favorite moments of the concert film came near the end as all three Chicks gathered around and beat on a plastic percussion bin. The image of three exceptionally talented women playing together — in both senses of the word — ends up being more interesting and poignant than any set of choreographed dance moves performed by lithe pop-stars while lip-synching. The crowd at the Los Angeles Forum is not surprisingly predominantly white, middle-aged, and female, but there a smattering of couples. And, in one great shot, a dad hold up his adolescent daughter so that she can get a better look at the stage while the girl claps in rhythm to the music.

The concert contains a cover of “Nothing Compares 2 U” as an homage to Prince, and Maines is one of the few vocalists who I think capable of doing that song justice. Oddly, the least successful numbers are the older, more iconic Dixie Chicks songs. “Goodbye to Earl” is played against a video backdrop of mug shots, presumably of misogynist men and their female victims, but the inclusion of photos of O.J. Simpson and Donald Trump creates a weird dissonance. Battery and murder are serious problems, and while I can’t fault the song for giving women a defiant anthem to soundly reject facile tolerance of inhumane misogyny, the relish with which the murder-revenge fantasy is sung has always, oddly, struck me as diminishing the seriousness of domestic assault rather than drawing attention to it. “Sin Wagon” fares a little better, but I like to fancy this is because the older, more experienced Chicks understand better than their younger counterparts that moral labels are a social control mechanism, so embracing the “sinner” label is more about rejecting the Pharisees among us than about actually relishing the sin.

Ultimately and not surprisingly, it is the songs from The Long Way Around (2006) that stand out the most and highlight the Chicks’ considerable talent. I’ve always felt that the grandness of Barbara Kopple’s Shut Up and Sing was not just that it captured a political controversy but that it showed the process through which a painful experience was channeled by gifted artists and used to create great art. “I’ve paid a price / and I’ll keep paying,” has its origin in one woman’s experience and her courageous refusal to prostrate herself before bullies and hypocrites. But the feelings the artists are able to convey about that experience are universal — common to most men and nearly all women. I’ve known from the beginning that The Long Way Around is a great album, but sometimes one needs a little distance to see whether or not a great work of art is of a particular moment or has the requisite timelessness to make one comfortable calling it a masterpiece.