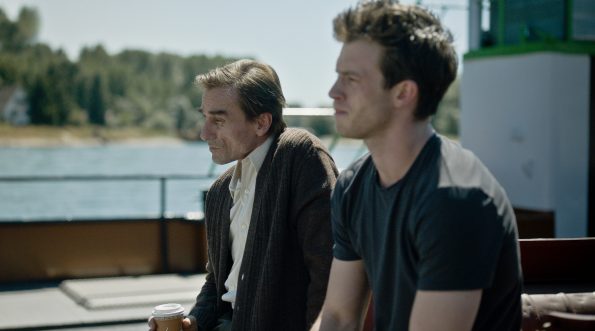 “The only way they have is to pretend to be someone else, and this is such a tragedy”

Jonathan is a moving family drama set in rural Germany that explores the long term effects that secrets can have on a family.  Jonathan’s father, Burghardt, is dying of skin cancer, and in his final weeks Jonathan works to uncover and put right all of the secrets and lies that have been dividing members of his family for years. Jonathan’s minimal knowledge about what happened to his mother and years of witnessing the deep divide between Burghardt and his aunt have left him feeling empty for years, but he appears to be able to overlook these flaws in his family until his father’s old lover, Ron, shows up. Ron’s sudden appearance unsettles Johnathan and causes him to begin to look for the answers about his family’s past that have been kept from him for so long. The rural German setting and the specific emphasis on Jonathan’s point of view make this a very personal and realistic story, leaving the viewer pondering how revelations about the past could impact their own family. The international marketing of the film advertises its award at the LGBTQ film festival, potentially giving viewers the impression that this was meant to be a “gay” film, and while the LGBT issues presented in the film are extremely important, they are just a small piece of the overall story of this family. In a recent interview, writer and director Piotr J Lewandowski describes his intent and inspiration behind making the film:

“I thought it was important to do it from his perspective. When I heard the story from a friend of mine I saw her perspective. I saw how her life turned upside down after she figured out that her father was gay […] and it troubled me to notice that the relationship that they had, and how hard it was for everyone, and it was hard because her father was not able to be honest in front of everyone […] And I did research in Poland and in Germany and I noticed that there was no difference you know, people, especially farmers, not from the big cities because it is different, but from small towns or villages, if they loved what they do and they committed to work on the fields and they love the animals, the nature and they don’t want to move, the only way they have is to pretend to be someone else, and this is such a tragedy.”

The focus on Johnathan’s heterosexual relationship along with the focus on how the relationship between Burghardt and Ron affects him underscores this idea, showing how well Lewandowski has adapted this story from the real life experiences of the friend that inspired him and the way that these experiences and stories made him feel.

The rural German setting works to further extenuate the divisions that Burghardt’s secrets and lies have caused for the family. The fact that Burghardt’s sister works on the same farm everyday with Jonathan and practically lives with him and his father, yet she has not spoken to Burghardt in years because of past events really shows the tension that Jonathan has been living in for all of his life. Living in the midst of all of this tension, it is pretty remarkable that Jonathan has not been looking for answers more persistently all along.

However it is made clear that Jonathan has not just been blissfully ignorant all of this time; his borderline violent outburst with members of his family reflect this tension, and show how his desperation for answers is growing leading up to his father’s impending death. This near violent characterization of Jonathan could be misinterpreted as him being homophobic or close minded, but given than Lewandowski states that the film is not about someone being gay, but about the family as a whole, this interpretation just doesn’t really mesh.

Lewandowski clarifies this point and describes Jonathan’s anger over his father’s relationship with Ron saying: “I wanted to show how Jonathan is coping with the situation, and it was not, to me, it was not a problem for him that his father is gay, that’s not the problem. The problem was that he was not honest, he was pretending to be someone else and so was lying. I thought this was kind of more important for me to understand Burghardt.”

This statement makes it clear that Ron’s sudden arrival simply has pushed Jonathan over the edge and has made him feel like he doesn’t even know who his father really is, rather than him being angry over the fact that a past male lover has shown up to help take care of his father. Jonathan’s slow acceptance of Ron and forgiveness of his father, along with his aunt’s acceptance of her brother’s sexuality even if she may not agree with it, shows the healing of a family and is what makes the story inspiring.  While many families would forever remain apart or would let their family member go to the grave while they still held onto past wrongs and mistakes this family chooses to move on and love each other regardless because love is more important than anger and secrets.

In response to the great success and praise that the film has gotten Lewandowski further elaborated on the things that made him make the film and the overwhelming positive response that he has gotten from audiences saying:

“I could not believe that this situation is still happening everywhere, I could not believe that people pretend and are afraid of not being accepted. I met a couple of farmers, gay farmers, in Germany who managed to do that, to live their lives and it took them 10 years to be accepted by the society and the community. And it was very heartbreaking for me to see that […] What made me so proud of doing that film is that at the end of the screening in many many countries, people, [including] straight people, were talking to me and saying ‘thank you for doing this film’, and this is what made me so proud; to see at the end that people were not judging and not classifying other people, they were just people and its was a film about love and about being honest to each other and to yourself.”