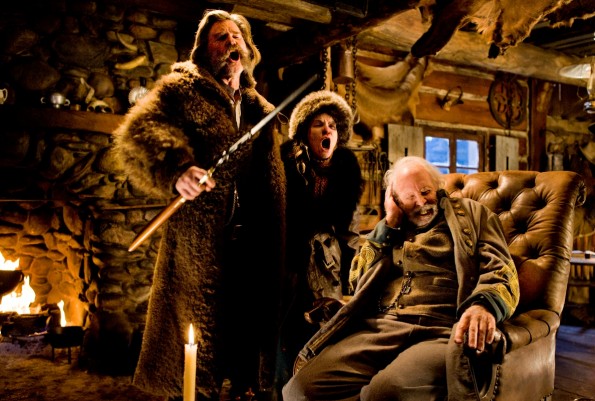 One of my favorite jokes, oft shared in these pages, is E.B. White’s old chestnut that analyzing humor is like dissecting a frog. You can do it, but the frog tends to die in the process.

Quentin Tarantino’s films aren’t comedies, at least not through and through, but they are similarly allergic to thoughtful analysis. At their best, the immediate felt response is pleasurable, and that pleasure acts as an inoculation against the guilt that inevitably follows when one stops long enough to think about what one is laughing at.

The story begins when bounty hunter John Ruth (Kurt Russell), trying to outpace a snowstorm with his prisoner, Daisy Domergue (Jennifer Jason Leigh), finds not one but strangers wandering in the soon-to-be-lethal western winter. After much suspicious bantering, he picks up Major Marquis Warren (Samuel L. Jackson) and Chris (claims to be sheriff but we never know for sure) Mannix (Walton Goggins) in time to hole up at Minnie’s Haberdashery before the storm hits. At the outpost, he finds a collection of strangers where Minnie and her family should be, as well as lots of clues that one or more people there may not be who they say they are.

Daisy’s bruises show evidence of a beating, but you know Tarantino–he’s never satisfied to imply violence when he can rub our noses in it. Within the first ten minutes John Ruth is smacking the manacled woman in the face. Every one is calling Marquis all sorts of racially charged names, and things just sort of cascade from there. Tarantino is a super-skilled writer, and here he is a jazz conductor of hate, playing each instrument to perfection. The problem is that he’s selected a human orchestra where each actor can only play one and the same note. The music that emerges is an extended game of “Can you top this?” nastiness. One character recites in prolonged detail how a family member of another was tortured and died. Another plays a significant amount of time with the bloody guts of one character in his/her face and the brain matter of another tangled throughout his/her hair.

But not since Reservoir Dogs have I felt the violence was without some small streak of introspection, disturbing/challenging undertones, or attempts to complicate our relationship to it. Jules (in Pulp Fiction) was having a spiritual identity crisis. Whether his epiphany was substantive or superficial, it at least allowed us a glimmer of hope that the most callous, irredeemable murderer could be shocked out of his complacency. Inglorious Basterds and Django Unchained had the convenient specters of Nazism and slavery to seduce us into rationalizing violence as the only means of avoiding a horrific kind of victimization. If that violence ultimately blurred the line between oppressor and avenger, one could at least walk away from the exercise feeling like the films fell on the side of honesty about the effects of violence after spending their two hours doing their darnedest trying to convince us to root for it.

I tried for about the first ninety minutes or so to convince myself that there was some similarly serious comment being made by The Hateful Eight, however obliquely, about the ways in which war erodes our moral sensibilities and greases the skidding and shifting alliances that form and re-form as power dynamics change. But it turns out that most of the first half of the film is just Tarantino spinning his wheels waiting to let ‘er rip. When he finally does, the violence comes with the unrestrained and uncensored glee that one only gets from an artist who has been emboldened by going a little too far in the past and not getting challenged for it. Now it’s no longer about about how far he can push the envelope. We’ve effectively given him the green light. Now we must deal with the directorial equivalent of Billy Mumy in Season Three of The Twilight Zone.

If there is a point here–and I am not conceding there is–it appears to be that whatever shifting political or social alliances we form will always give way in the face of our truest, deepest, hateful selves. Hate is not just the strongest emotion, it is the essence of man (or woman). It is what we find left over when we scrape beyond the surface veneers of decency and self-preservation.

And, the film postulates, we needn’t scrape very deep to find it.