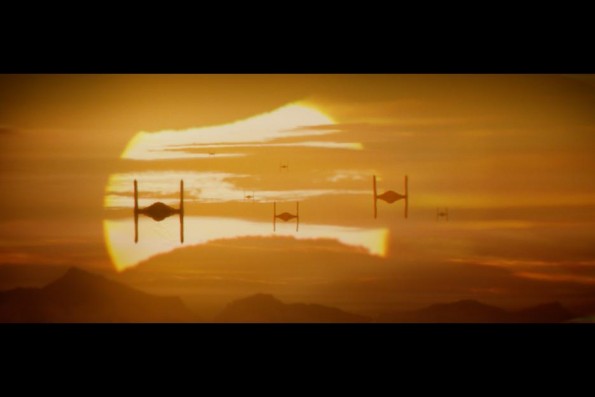 In academia some professors use a service called Turnitin.com to check new pieces of writing against previously published sources. Informally called a “plagiarism detector,” the program actually only notes and flags similarities–passages where the language and sentence structure is similar enough that it might indicate plagiarism.

A disohnest (or lazy) writer may try to circumnavigate the software by making superficial changes to the surface of copied passages, most frequently by swapping a word for a synonym to break up the string of identical characters. Alternately, the writer may just go ahead and throw quotes around a cribbed passage–hey, if it’s a homage or a citation, it’s not stealing, right? 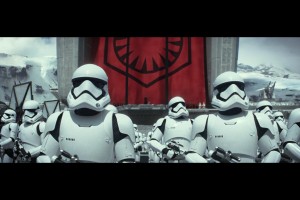 There may be debate over whether or not The Force Awakens (★★½) is a good movie, though early returns are far more positive than I expected. There shouldn’t be any debate, though, over whether it’s a new movie. More patient and committed fans and critics than I will no no doubt get right to work at assembling the side-by-side comparisons of plot points, lines, setting, story structures, costumes, effects, and even shot compositions. Suffice it to say that the action is set in motion by a good guy hiding something in a droid and a black-masked villain with a raspy voice leading the hunt for it while the bad guys work on a planet-sized weapon of mass destruction.

The characters’ names are different, and they reference characters from the previous movies (though how, in less than one generation, Luke Skywalker is thought to be an ahistorical myth while his friends and colleagues are still alive, wasn’t entirely clear), so The Force Awakens doesn’t come off as a reboot or remake exactly. But it certainly doesn’t come off as a continuation of the metanarrative or an enrichment of it. What it most resembles are films like Clueless, O, She’s All That, or 10 Things I Hate About You–films that change the setting but then simply retell classic stories.

So? Aren’t many of those pleasurable films? Ones which breathe new life and understanding into familiar texts?

I suppose. And if I knew that was what The Force Awakens was going to be from the outset, maybe I would have been less disappointed by its lack of freshness. As mimicry, it is good. As fan-service, it is serviceable. But it adds nothing to the underlying tapestry. Whatever pleasures are there are imported from other movies. The audience applauds when the actors enter, but that’s only out of respect for their past work. Could you imagine if J, K. Rowling did an eighth Harry Potter book and it was the next generation running through the same plot as the last? If Go Set A Watchmen had been about another trial of another African-American, a year later? 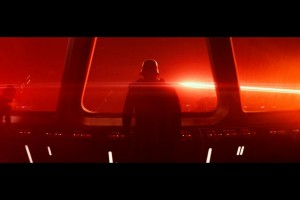 For all its cribbing from past Star Wars movies, The Force Awakens somehow ends up feeling even more influenced by the long shadow of the Marvel universe. That studio has perfected the art of the content-less movie, where easter-eggs, hints for the next story, and cameos from parallel characters take up so much room there is scarcely time left over for an actual plot.

There is one moment of genuine grandeur here. It involves the way a particular character gets hold of a light saber, and even that moment was somewhat muted by being sandwiched in-between so many other invocations of seminal Star Wars moments. The decision to let Rey (Daisy Ridley) be the central new figure scores a few egalitarian points in a genre that isn’t always kind to its female characters. Beyond that? Once a song goes mega-platinum, you cover it at your own risk. The penultimate fifteen minutes finally allows some of the new characters to come into their own, but then Abrams feels obligated to include what really should have been the first fifteen minutes of the next movie.

In a year in which Mad Max: Fury Road showed us it was possible for a film to harmoniously join familiar elements with fresh twists, it’s sad that Star Wars is reduced to the status of a retired vaudevillian, too old to learn new routines, or an aging rock star content to let the audience provide the harmony for the lines they know by heart.  The Force Awakens will be successful. It may even be better enough than the awful prequels to convince the eternally hopeful that the franchise is once again relevant.  But I can’t imagine it ever being loved or cherished. I can’t imagine the fan who grows up to love Star Wars or movies in general remembering it as a seminal moment in his or her imaginative maturation.

That’s a high standard, I know. But when your family name is Star Wars, people expect big things from you.