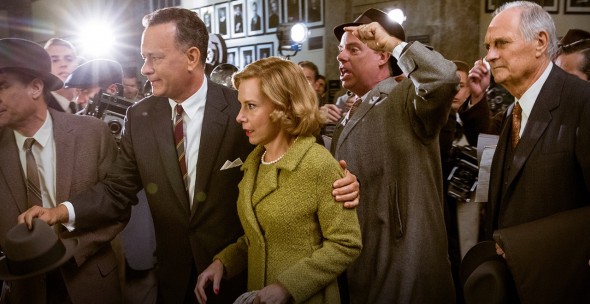 In what is arguably Spielberg’s best film, Ben Kinglsey famously quoted the Talmud: “Whoever saves one life saves the world entire.” The line is an apt summary of the humanism which pervades much of Spielberg’s work, and his newest film Bridge of Spies (★★★½) is no exception. And as with much of his oeuvre, Spielberg here employs his trademark sentimentality and humanism both to the film’s benefit and to its detriment.

The first half of Bridge of Spies is Spielberg at his finest. When insurance lawyer James Donovan (a solid Tom Hanks) is asked to defend alleged KGB spy Rudolf Abel, (Mark Rylance) his natural reluctance to accept a task that will make him the second most hated person in America serves as a natural vehicle for Spielberg to remind the viewer of the dignity of every human being, even thoroughly hated Soviet spies. Donovan’s rugged determination to follow the constitution and give his client a fair trial seems to be an extension of Spielberg’s own voice that defending the most despised is a noble act of decency which makes the world a better place.

As the rest of the country reacts with revulsion toward Donovan and his family, the film makes a compelling case why the rule of law is important and why we must treat our enemies the way we would want them to treat us. When Spielberg intercuts scenes reminding the viewer of the fear that paralyzed the US during the red scare, it is difficult not to see a much deserved critique of the fear mongering of many Republicans which has led to the creation of the NSA, the use of Guantanamo Bay, and the panic driven retorts which shut down any attempts at a conversation on gun control. A sequence in which the CIA is inventing jets to fly at 70,000 feet where they can take covert pictures of the Soviet Union has clear parallels with the US drone programs as well.

Throughout all these sections, Spielberg eschews overly lionizing his heroes — we first meet Donovan as he manipulates his way out of paying an insurance claim — and Spielberg includes scenes that remind the viewers that the Soviets can be just as bad if not worse. At the same time, the narrative is driven by a force that celebrates the virtue of which people are capable.

The camera constantly reminds the viewers to beware of their judgments, reinforcing the American ideal of innocent until proven guilty. Many scenes begin with a close-up or a dissolve which makes it difficult to know exactly what or whom we are looking at. Spielberg then cuts or zooms out to a mid-range establishing shot, providing the context to look more closely at what’s before us, serving as a sort of reminder that the due process which Donovan wants for his client should be applied to everyone.

However, roughly half way through the film Donovan is asked by the CIA to go to East Germany and negotiate a trade with the Soviets for an American spy they captured. At this point the film settles back on being a by the numbers thriller/rescue mission, which may not be a bad film, but it is a major step down from the nail-biting legal and ethical drama which had preceded it. It also doesn’t help that the other Spielberg film in which Tom Hanks navigates a dangerous rescue mission in enemy territory is a more riveting and better dramatized rescue mission. Compounding that problem, a couple of composer Thomas Newman’s musical cues explicitly recall John Williams’ score for Saving Private Ryan.

Once the action moves to Berlin, the film sheds not only its nuance, but also the effective close-up then establishing shot pattern. The decision to jump around to other characters to flesh out their back-stories may have given the audience a stronger emotional connection, but it significantly interrupted the narrative. While the emotional moments are mostly earned, Spielberg’s sentimentalizing threatens to become overbearing as Donovan pulls out all the stops to rescue the American spy and another prisoner discovered later. The historical story may have played out as the film depicts, but the conclusion feels foregone not because of history, but because of the emotional buildup.

Eventually the film does regain its footing, and it ties the second half to the first quite nicely, referencing some earlier scenes which have a distinct Coen brothers’ ring. (They’re co-writers along with Matt Charman.) The reason I appreciated the first half of the film so much is that it balanced the Coen’s cynicism with Spielberg’s optimism in a way that brought out the best of both. The second half is an average thriller, but it feels like less because in losing that balance it drops substantially from the first half. However, that drop in no way detracts from the gripping drama which unfolds over the first part of Bridge of Spies.